Dropouts are back (sort of)

After few months of not using the XERT EBC App, I now struggle with dropouts again

Same hardware and configuration as before. All components with newest firmware/software available.
how I solved it before

but slightly different behavior: it seems that “only” the power recording is affected this time → no “clonk” effect.

Does it work fine with basic configuration? (Samsung, BT, EBC, everything else turned off)
Is there a power meter on your bike?

No it doesn’t.
Did two minutes of workout just to confirm that today - same dropouts.

No power meter on my bike.

The only dropouts I have experienced with EBC are when sensors are connected by ANT+.
BLE has been working fine every time.

Send this into support@xertonline.com along with screenshots of all your configuration screens. As well, provide details on what other apps are running on the Samsung or on your PC that might interfere with the connections.

Short update and solution for me:

I bought my first iPhone (13 Pro) and used the iOS XERT app with it (instead on Android) with exactly the same set-up as I described before, that originally worked with my S10 Plus smoothly until it didn’t.

No drop-outs. Everything works well now.

I am certainly no expert for iOS, but I can say that you are wrong with this one. 5SE is not part of newest security updates anymore, since quite some time.

As I have a working solution now - I don’t need a second IPhone, and the display would have been to small for my old eyes. Thank you anyway.

It’s the iPhone 5SE (not S nor SE2) and it’s running iOS 15.4.1 at present.
Screen is small but’s it 's a good navigator device running a battery cover.

An older SE is what I use for testing EBC on iOS. Highly readable form factor.
No need to update the iOS version since there is no SIM installed and it’s not used as a phone.
Ditto with my ~$99 Android head units which include a KingKong Mini and a refurbished Palm. No SIMs but you can install and run any apps you want that don’t require a mobile connection. Google Maps works fine too (offline map mode). 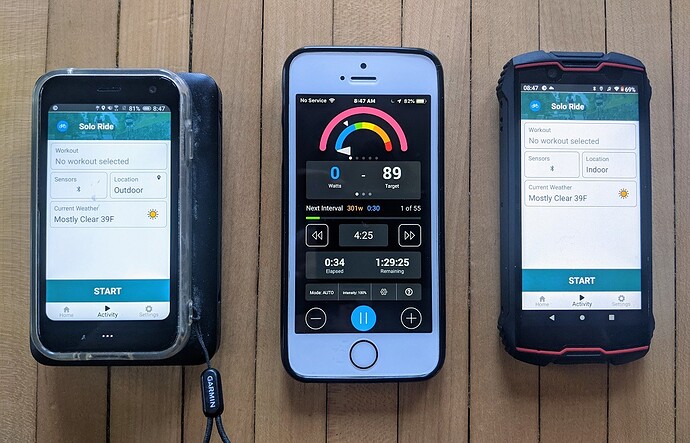 Haven’t had any BLE dropout issues with any of them.
I sold my Garmin 1030 which was slightly shorter than the Kingkong Mini but same width.

I had to ditch my SE 2 years back as my eyesight isn’t good enough anymore for such a small screen.

I find it quite amazing that it’s still suported with updates, but the SE is really the last of the very last supported phone devices. The tech show’s it’s age, the camera is awful and the battery drains quickly.

I’ve to admit that i’m very tempted with the Hammerhead Karoo2. It’s no smartphone but uses a smartphone SIM card and (and!) runs Xert EBC natively on the device.