I have set a puncheur goal for March 2023. I’m in the “base” fase right now and I hope to follow all Xert recomendations strictly.

My peak FTP this year was 285 Watts. But because of multiple fakethroughs (I did not flag) it has dropped to 247 Watts. (Honestly I enjoyed the summer and polarized training was nowhere to be found). I know my FTP must be somewhere in between these numbers.

Xert forsees a 279 in March 2023. But, I really feel 247 should not be my starting point. So I’m planning an event to raise the stakes from the start. Tomorrow I want to do the FTP test or a breakthrough protocol.

Which one is best suitable for my situation?

Examining the FTP test it’s aims at 20 minutes 263 Watts. But I know I can do better. So this does not look like a good plan? Or am I missing out something?

Or should I consider a ramptest instead?

Looking forward to hearing from you!

If the deterioration is due being on optimal decay for a long time with no real breakthrough, your signature is likely understated, as you suggest (and not just due to the fakethroughs). You may consider setting to no decay for base phase.

So whatever you do, make sure it’s all-out, and make sure you ride well above the levels suggested by your current signature. Xert BTs work best with a lot of time accumulated above threshold, so one of the BT workouts, or just an 8-minute effort to failure (can be variable if preferred), followed by a couple of sprints 10 seconds later should do the trick…. I think that’s better than the 20 min test as there’s less need for accurate pacing, and also likely quicker recovery (20 min above threshold is painful). And do it in slope mode, not ERG mode

Thx for your reply.

I have set decay to “slow”.

I’ve just performed Xert Fitness Test for Breakthrough Version 3.
I made three adjustments in the saddle:
1 I performed the last big block (305 Watts) twice because one was to easy.
2 I shortend the low Watt pauze part
3 After the low Watts I altered the level from 100% to 123%.

@ 1 I think I might have been able to perform another.
@ 3 the forelast interval @ +450 Watts was challenging. The last interval I stood up to sprint but ERG mode controlled to max 680 Watts (whereas my pp is 1100 or so).

Actually I was a little bit dissapointed but I am very happy to see XERT now upgraded the former 279 Watts in March 2023 to 292 Watts. This I find a perfect target.

About the Xert Fitness Test for Breakthrough Version 3. Maybe a version 4 can be develloped for those who like me suffered decay and fakethroughs. 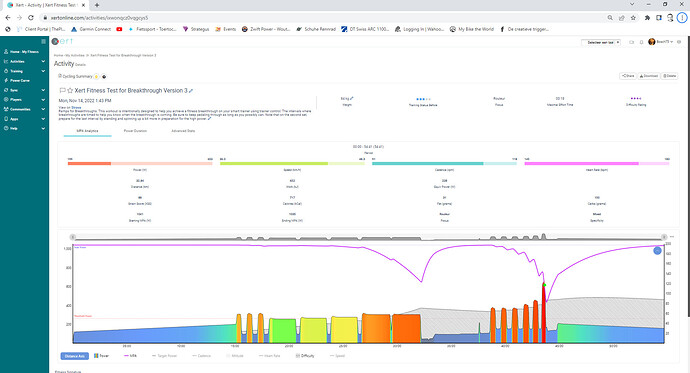 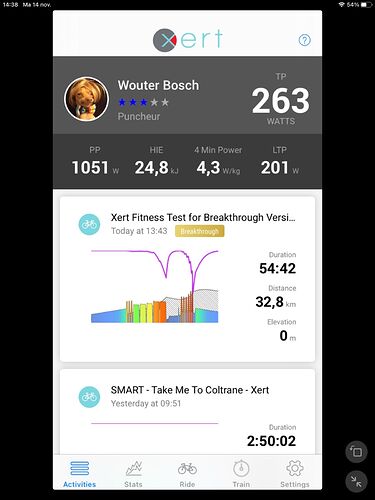 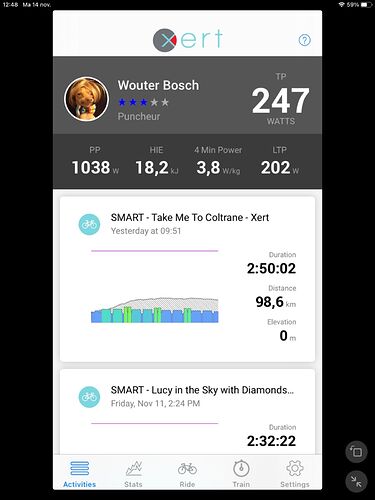 Congratulations on the BT

I would really suggest trying again when recovered but do it in slope mode, to overcome the issue of the interval running out before you do… slope mode you can just rider harder and longer than the official interval

And increase the intensity / targets by 5% or so, and make sure the end of block is truly ‘failure’.

Both are easy enough to do in the app, and you’ll get a more accurate signature.

Examining the FTP test it’s aims at 20 minutes 263 Watts. But I know I can do better. So this does not look like a good plan? Or am I missing out something?

Or should I consider a ramptest instead?

I’m just not a fan of 20 min tests (or 8 min tests), or really constant power efforts to failure in general…

My go-to for testing my fitness signature is always some form of all-out micro-intervals (either 30-15’s or 30-30’s), since it doesn’t really require any sort of structure beyond the basic 30s ON, 15/30 s OFF and repeat until failure. It’s also nice that I can do these inside or outside no problem, at least where I live.

Further, by dropping my MPA relatively slowly over the course of 12-30 minutes, it allows me to bring my MPA down close to my TP (which generally helps improve Xert’s estimation of Threshold), rather than me sprinting up to meet my MPA (which might better indicate the HIE aspect of my fitness signature). 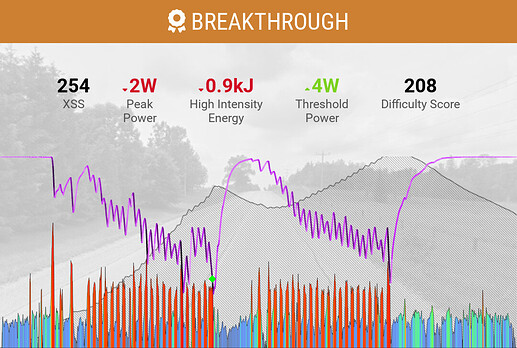 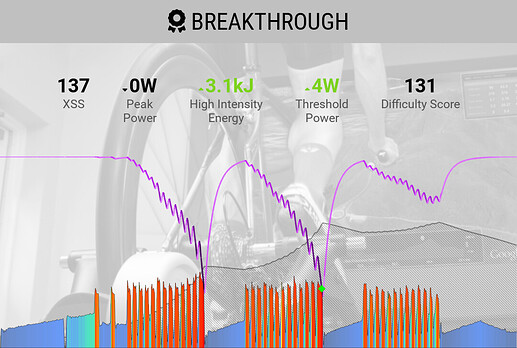 I have come to the opposite conclusion. I find that a signature produced using micro-intervals is complete garbage for iso-efforts. I simply can’t get close to the predicted power curve over longer durations.

If, however, I test with relatively constant power efforts, the resulting signature will produce a power curve that I can hit, and it can be eerily accurate. 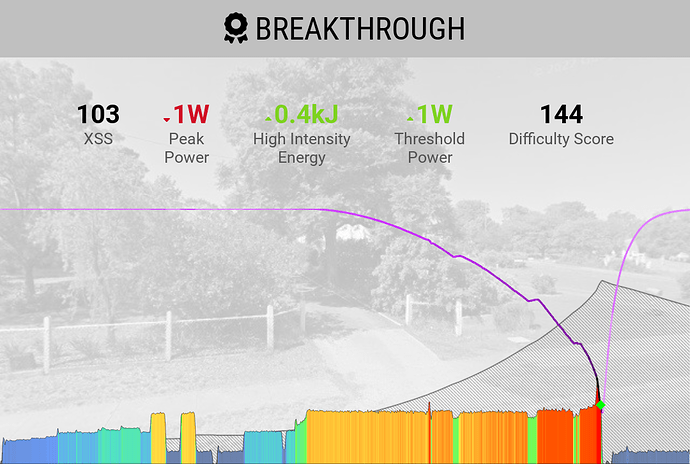 It could be due to your power meter. Some don’t drop power as soon as you slow down. These can add extra seconds of higher power which can inflate a signature if they are repeated over and over. If you have another power meter source, try it with that.

Might also have to do with the types of efforts common in your events (or training).

I very rarely (if ever) ride at the same(ish) power for 10+ minutes at a time - however, I do often have surges and recoveries during a group ride. I can see an athlete that often performs Time Trials might find a steady-state effort like yours above more beneficial.

I’ll never see a breakthrough in a group ride; in fact I use an AIRhub to increase the intensity. I never do time trials, but every month or so to keep my signature fresh, I’ll have a crack at a KOM or do a test on my Kickr. For a time I did Rønnestad intervals for this purpose, and the resulting signature was great for Rønnestad interval prediction, but inflated for daily training.

I’ve found the exact same issue with breakthroughs coming from 30/15s etc, always sets my TP way too high, I’ve used the power data from my Garmin pedals and also my Kickr with pretty much the same result (+/- a few watts) and the micro intervals breakthroughs result in an elevated TP for me by about 20-30watts, last time I used this method I ended up failing workouts quite badly. What I have found works quite well is to go out and test a few durations, 5sec , 3-5min , 20-30 mins and then put those numbers into the power curve calculator, this then gives me a ball park figure that usually corrects itself (if needed) the next time I do an effort up a climb for example.

That’s similar to my approach.

Out of interest, is your HIE on the high side? Are you able to handle big Difficulty scores?

Don’t think my HIE is on the high side, I used to be a time triallist until April '21, since then I’ve been doing longer distance stuff, I have noticed that if I get a breakthrough on say a five minute climb, it quite often elevates my TP rather than my HIE. The last time this happened it was by about 25 watts, which I knew wasn’t correct so I flagged the activity. I’m absolutely rubbish at sprinting, so my PD Curve is quite flat compared to a lot of people which I suspect means I don’t quite line up with algorithms that predict FTP.

Previously, I got frustrated by this sort of thing, especially with an inflated signature, Xert never really lined up with how I felt regarding the difficulty of a ride or my freshness, however, since I’ve had the confidence to ‘overide’ the system and input my figures from testing, it does seem to reflect how I feel and the difficulty of my rides now matches how I feel they went.

You can also combine two tests and let XERT do its magic. Below is a 5 minute test one day and a 20 minute test the following day.

Remove selected sections of data from your file.

I thought about doing that, but the merged file did the trick even with the long break.

Did you load the combined file into Xert instead of the two separate files?