Today i did. the 4 horse men ride in Zwift. I did it in 3:50h with an equivalent Power of 177w.
I wonder why my trainingsstatus is still blue. This does not respect the long effort I did.
Garmin recommends 3 days off. I think the middle of the two extrems would be true.

What was the XSS and Focus? What was your Training Status/Load before the ride? What’s your Form after the ride? 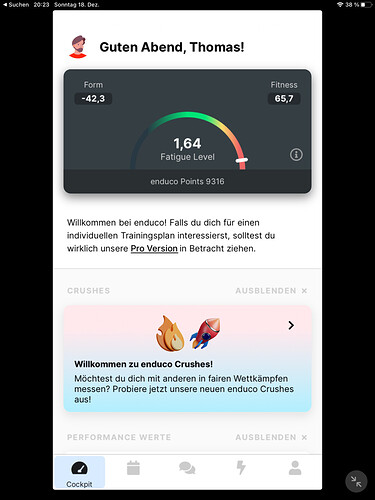 Adjust the freshness slider slightly to show it you are tired. Doesn’t need doing very often but it is worthwhile correcting it when it gets out of sync.

Of course I can do it .
But I am sure that it would be great, if xert could estimate the correct status.

Form after the ride?

Since this ride is almost purely endurance ride (very little high intensity), status stays blue indicating you might have a bit more left in the tank (unless you were struggling to turn the pedals, you may have had another few minutes of riding still in your legs before you turned red “Very Tired” status). Most athletes undereestimate how long they can actually go at intensities below LTP for example. In this case, I would also ask how well did you eat before the ride? During? If you fuel better, you can go longer and at higher intensity.

So many factors go into this. You’re at 3 stars Training Status. If you were very blue training status before, it’s not unrealistic to be on the edge of blue/red by the end and if you had fuelled well and during, I imagine you may have had some more kms available and certainly not 5 days rest. See how you feel tomorrow after a good meal today.

In the end, if indeed the status doesn’t reflect the feeling that you need more rest, move the Freshness Feedback slider. That’s what it’s there for. But honestly, you could very likely do 400 or 500 xss with a 3 star very blue Training Status in one ride. You don’t need to take 5 days rest once you reached 280 xss before riding again. That’s completely unreasonable. That would be what I would expect from a recreational or untrained cyclist.

. Even because the WM finals were over too

Thanks for your explanation.