Eternal confusion in XATA vs. planner

I read plenty of topics on forum, so knew, that this is Xert feature, that causes the most confusion among Xert users (and when it so, it should be changed), but I thought that know, how it works and the best is not to care much about deficit. But after playing with planner, I actually see, that have no idea, what it does at all and need explanation. My understanding was:
XATA looks at planned workout from now to next 24 hours and workout till midnight affect needle, workouts after midnight till next 24 hours from now affect triangle.
with planner looks at UAT, than on workouts 7 days back at exact time (wrong idea if so) and on base of this show deficit, surplus. So I planned workout and just changing it by one hour added XSS to surplus. I am wondering what explanation can be for this if its not a bug 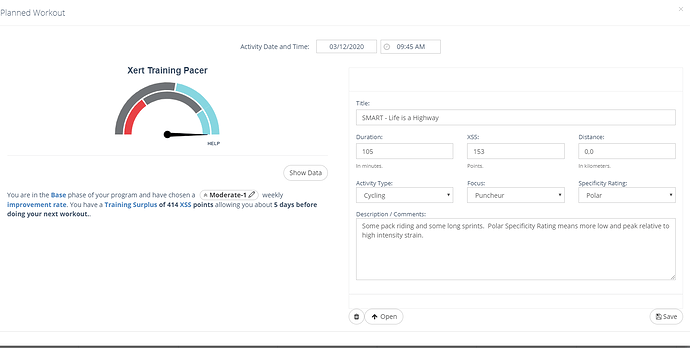 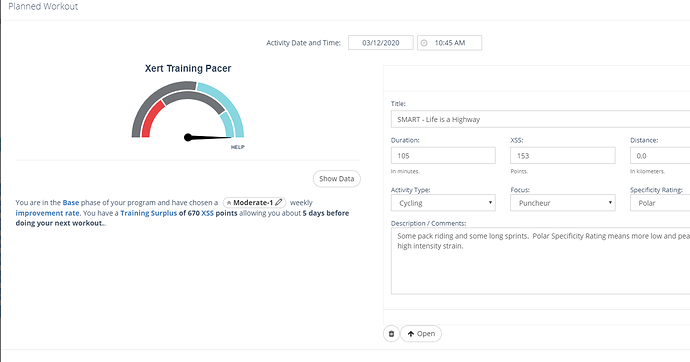 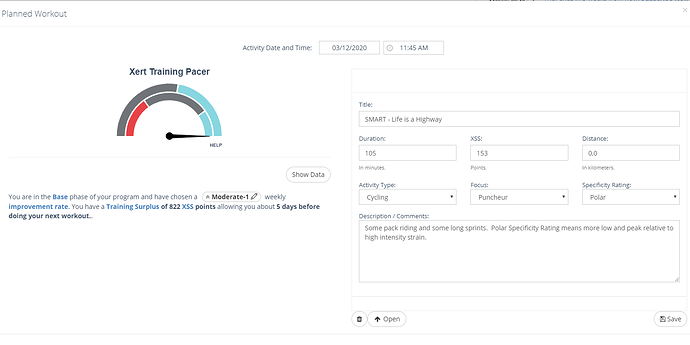 And if planner and xata looks 7 days back, is correct that when doing 7 days training camp, I get big surplus in that week, but next week I will be in deficit (in both planner and xata) and xata needle will be on left side - looking at previos week, but the best is to leave it and that it will stabilize it in following week?

If you have a surplus starting at 400+ as shown in your screen shots, I can imagine why Xert gives you red stars, as you mentioned in your other post…

If you continuously have that sort of surplus, without falling apart eventually, there is something amiss. The surplus means you are accumulating (much) more XSS than your plan requires - how does that not fatigue you?

This is regardless of the improvement rate you have set. If my stars are red and I change my improvement rate to something more or less aggressive, the color will not change, only my training pacer will fall back or move forward.

I’m not sure where the numbers you use come from, but I usually look at this for guidance: http://baronbiosys.com/the-stars-training-status-and-form/

The change in deficit or surplus when (simply) adjusting the time of the planned workout, was discussed in another thread earlier this week.

This is the thread I was referring to: Confused by changes in Estimated Training Needed - maybe it will also help clarify some of it for you. And listening to podcast 15.

I read that topic (I think a read most of them), but it doesnt explain those jumps in surplurs by adding an hour.

What are you hoping to accomplish by populating the Planner?
I don’t use it at all but if I did I would select from recommended workouts for perhaps a week at a time. This assumes you have a valid signature and enough power data on file for Xert’s predictive calculations to work correctly.

my planner is empty, I was adding just one workout. I know that Xert works the best without big planning. These huge XSS changes happened just by changing workout hour.

I tried to replicate your issue, using your planner for tomorrow, but I’m really not seeing the wild swings in XSS suplus/deficit. One thing that might have happened is that you plan/remove an activity, sometimes the planned XSS from the planned activity is still counted towards the day’s surplus/deficit. After removing a planned activity, refreshing the page will 100% ensure that doesnt happen.

You’re correct, the planner looks at your suplus/deficit by using a rolling 72 hour window, so depending on what time of the day you plan an activity (and what day of the week you trained last week), the recommendations may change (or the type of workout may change, if your freshness increases during the day from red or yellow to blue). You can get around this by using a UAT of 11:45 PM, which will essentially show what the XATA on the main page displays for each day.

There are a couple other considerations to keep in mind. XATA does need some time to “learn” you from your data. If there isn’t much historical data to go off of, or if there are large breaks in training, it can take time for XATA to learn your weekly training patterns, volume, IR, etc. Additionally, the trial period has a sub-set of the full Xert workout library available, so the recommended workouts are more limited than with a full subscription. Hope this helps! Cheers

I cannot replicate what you are seeing, but your screen shots imply there are multiple workouts scheduled for the same day. Even if that is not the case the first entry is way off.
I suggest filing a support request with support@xertonline.com.

Your current Training Status is Fresh and should consider a Endurance

activity or workout, generating about 100 XSS of overall strain.

it was just a single workout. I was changing time at this single workout to see, if it affects training surplus. I think there was a bug. I refreshed browser, even used CTRL+F5 to update cache, but it stayed the same. It looks, that when I edited workout time, orginal workout stayed on Xert servers unchanged and that XSS was added to it. There might be some delay on their side… I noticed to 2 days ago, when tried to use workout player for first time, that it did not load planned workout (I did not know yet, that it doesnt load from calendar). So i tried to add workout to calendar, changed UAT to later in order to add ti, but it only offered me to save done workout, no list with recommended workout. I Tried many times, but nothing. I gave a shot 2 hours later and it worked (without changing anything), so after these two experiences I would say, that some delays can appear on Xert side from time to time. But other users would know more, I am just rookie in Xert.

Hi Scott,
I knew that is something is not right, it just added added/substract workout XSS. I actually refreshed page, but it perhaps got stuck somewhere in system and needed more time to get rid of it. It works now

I am not planning to care about surplus/deficit much, only this buged me.
My idea is that training surplus/deficit XSS is counted 7days back and it lasts only another 7 days (I think Armando mentioned in some topic: XATA will add XSS to the workout if you are behind and will aim to have you close the XSS deficit in the next 7 days.).So when somebody having deficit by doing lots of XSS previous week(camp), and this deficit is not fully covered (XSS+IR), it will get erased in next 7 days, because surplus/deficit is counted from 7 days back will last only 7 more days? Thank you man!

Yeah, it can be confusing, so I get where you’re coming from. Usually, I tell folks not to get too worried about the numbers but focus on keeping the needle approximately centered.

And correct. XATA will do what it can to close the deficit, but depending on your training load, usual activities, and IR, XATA will recommend workouts that contain more or less than the total deficit. Cheers!