I’m beginning a 120 day training program for the P2A. I have not had a breakthrough in a few weeks and my fitness signature is “stale”. I have looked at some of the workouts designed for breakthroughs and there is, to my noob eyes, some variations in the types of breakthroughs that these workouts are aimed at: sprints, 20 minute power, etc.
My question is this: if I’m starting a phase that’s focused on endurance, is there a particular type of breakthrough I should aim for? Common sense probably doesn’t apply here, but I’m thinking that a peak power breakthrough from a sprint isn’t going to translate into changes in the endurance workouts that I’ll be doing in the base phase.
Any help here is appreciated.
TIA,
Marc

All the BT workouts are designed to drive you to failure at some point during the workout.
Ride in Slope mode and exceed targets if able without blowing until the interval(s) to failure where you should try to spin up and go as hard as you can for 5-7 seconds or longer right before collapsing.

Search the library for “fitness test” (in quotes) and pick one to try. Over time you’ll discover a favorite. Mine is Under Pressure.

The difference between the workouts with peak power sprints is the opportunity to express that number if you think PP is understated. However, PP can also increase by sprinting to failure with MPA draw down (estimated PP).

In actuality any workout ridden in Slope mode that draws down MPA sufficiently is a candidate for a BT effort. Some like Ronnestad-style efforts for this purpose such as this workout.
The key is to flatline MPA long enough to achieve a BT or in the case of sprints exceed current PP value.

Thanks ridgerider2.
I had looked in the library and found a few of the tests. Some of them looked familiar–ramp, 20 minute test–but then there were the others like “Break on Through” and “Push It” that were distinctly Xert (the titles taken from song titles, lol). I used to do a fair amount of those former tests; I’d be happy to avoid them in the future.
Slope isn’t really an option for me: I have Garmin pedals and a KK Rock and Roll trainer. I’ve been using a “dumb” trainer for years, so I’m used to the inconvenience of finding the right gear for the required power.
I took a look at “Under Pressure” but it says it’s out of reach for me; I wonder if that matters if I’m just trying to go to failure?
Happy New Year!

Here’s a simple breakthrough activity to use with a dumb trainer. Just pedal over threshold, get the legs burning for 8 minutes, back off a little for a few seconds to catch your breath, then sprint as hard as you can for ten seconds. Do another 15 second sub-threshold interval to freshen your legs a little, and then sprint again for 10 seconds. Repeat until you can’t repeat! Very simple activity. You can do it on Zwift easily.

Your thinking is correct - you want to make sure you hit TP and HIE, rather than PP.
That requires a longer draw down of MPA, which doesn’t necessarily need to be constant power as you see from the BT workouts.
Ideally you want to ride near MPA as long as possible, rather than only a few seconds, which means holding above threshold (or at the new threshold) when you’ve nothing left (which is unpleasant)
It also doesn’t need to be a workout, can be a race, all-out on a local (or virtual climb), or @CarmenV ‘s suggestion should also work, as it’s long enough at 8 minutes (but ideally you will have drawn down MPA to near BT at the end of 8 min already, otherwise you are still using PP in the end). The suggested repeated efforts after very short recoveries in the end are also useful, though ideally those are longer than very short sprints (and again, they’ll be unpleasant at that point).

I took a look at “Under Pressure” but it says it’s out of reach for me; I wonder if that matters if I’m just trying to go to failure?

Slope isn’t really an option for me: I have Garmin pedals and a KK Rock and Roll trainer. I’ve been using a “dumb” trainer for years, so I’m used to the inconvenience of finding the right gear for the required power.

That’s actually what slope replicates (albeit the dumb trainer has slope of 0), so you’re all set.

Thanks Wesley, that was helpful.

In the end, I decided to do the Xert Fitness Test for Breakthrough Version 2 while riding on Zwift. The results were “odd”. Because I quit the workout on the remote player and continued pedaling on Zwift, I got the first report showing a 5 watt bump in PP and a 2 watt drop in TP. I guess this makes some sense because in the Pre base phase I was getting a lot of puncheur workouts suggested to me, so I was sprinting quite a bit.
After I cooled down, I decided to chase someone up a hill for a couple of minutes. After I logged off Zwift I got another notification for a breakthrough. Before I deleted the first activity, I decided to take another look at the BT report, but it had changed to a Near BT. Hmmmm. I imagine this has something to do with the double entry; it’s neither here nor there for me, but maybe some of you data-folks will find it interesting. 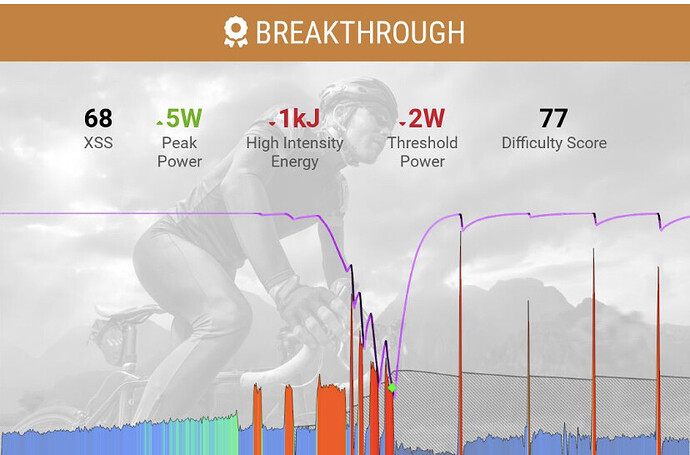 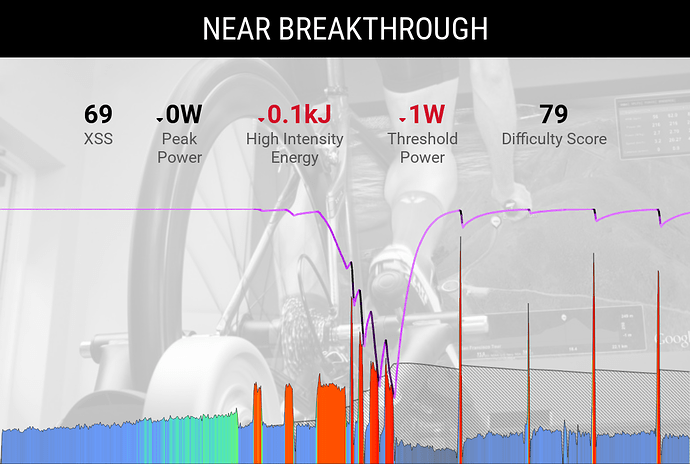 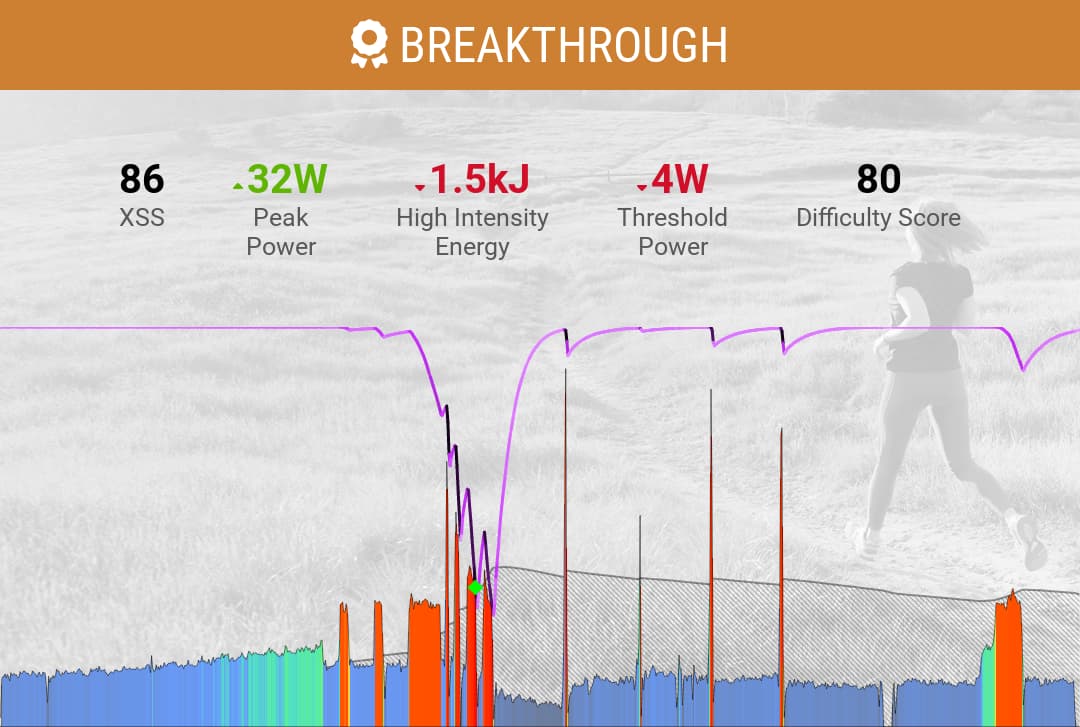 Regardless, I have a fresh signature now and I think–based on my limited knowledge–that I’ll likely just be doing endurance workouts while in the base phase of the plan. Next time I think I’ll try another BT workout just as a point of comparison.

Searching for “fitness test” in quotes you will locate the five standard BT workouts.
They are all 3-diamond rated but as you surmise that rating doesn’t matter since you are supposed to ride them to failure points in Slope mode.
One is only 30 minutes long of which only 10 minutes matters for the BT effort portion. Nothing like traditional FTP tests (RAMP, 20 min, 8x2) is required.

XATA by default will always recommend workouts you should be able to complete.

You’ll see a warning triangle under your name if no BTs detected in over 3 weeks. That means it’s time to force the issue which you can do by manually selecting a BT workout from the library.
The reason for Slope mode on a smart trainer is so you can exceed both target watts and duration to ensure a failure point when the time comes. If signature is understated and you match targets/durations you may never reach failure points. In Slope mode you can force the issue.
You should be able to do the same thing on a dumb trainer or as @CarmenV mentions by riding to failure on your own.

If you are satisfied with your current signature and won’t be “testing” yourself for weeks while in Base phase, you can change Decay Method to No Decay and signature changes will align with TL.

Unless I’m told it’s a bad idea, I’ll just leave the decay where it’s at. Chances are, I’ll get restless in the next few weeks and do a zwift race, which will serve as a test as well.

There is a lot to learn here obviously. I appreciate you taking the time to respond.

Hemmmed and hawwed over doing a test or other type of BT workout this morning since I’ve been stale for a week. Decided on a short Zwift race this morning and it worked out well. Good to know there are plenty of ways to skin the proverbial cat.* 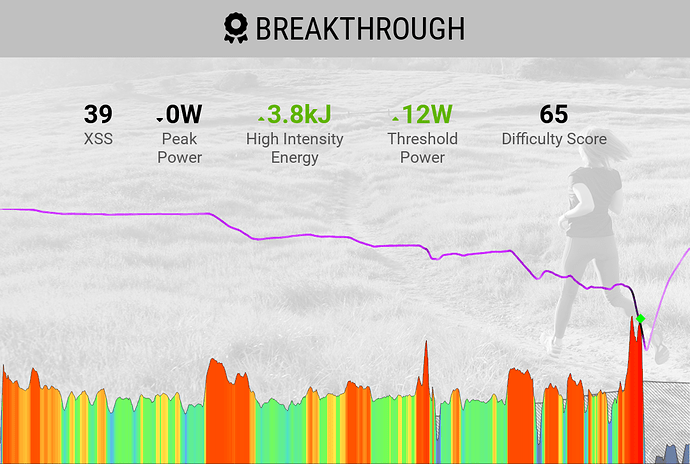 Yes, there are so many ways to test your actual fitness!