XSS for MTB vs Road

Ok, so I’m a power junky. I bought a power meter for my MTB bike. I’ve done a few XC races on the MTB that were about 2 hours total time. Here are a couple observations. I don’t know if this is me or if it would apply generally. Just random musings… not sure I really have a question. Just thoughts.

Ad.2) Exactly, XSS captures the load coming from generating power by „turning the pedals”. However, this is not the only load your body is taking. In particular MTB requires a lot of bike handling effort and cognitive stress. Imagine difficult, technical descent on a mountain trail: you could be very exausted at the end of it, even if you didn’t make a single turn of the cranks

And XSS or any other power meter based metric will show „0” load/stress.

I think this is exactly part of what is going on. Both my last two races had around 3000 ft of climbing. But It was a loop so I had just as much descending… and yes, the descending was rowdy and fast.

Here is an example of an mtb Ride that was not a lot of elevation gain though. It was fairly flat. It was pretty chunky and I gave a hard effort though. Hard to say if it was really only moderate. I tried to get a Strava KOM. Ended up with 4th lol. 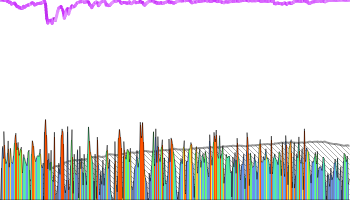 Difficulty Score is the exponentially weighted moving average of XSSR.
A rough gauge of difficulty can be determined by looking at your XSS versus time.
Example: 134/1.75 hrs = 76 which hits Difficult (76-110), but the weighted average score for the ride was below that.
One easy way to visualize difficulty is how often and how deep MPA is pulled down during the activity.
As mentioned, you also don’t get any credit for handling gnarly descents.

Concerning effort results/descriptions for MTB activites in Xert has created a bit the same thoughts
for me personally.

Giving it a powerful gravel/wood cross-ride on the heavier MTB on flat terrain (no descents) with an
average cadence of 93 rpm and a HR around 150 bpm results in an “Easy” difficulty rating/score.
An average Watt value of 254 was rated for the same ride on another platform, but that should’nt
count to much (or should it?).

Riding on gravel or in the woods, cornering and “breaking away” after slows/stops is certainly quite
different from riding on the road (concerning “XSS MTB vs Road”). Somehow (and that’s the reason
for thinking about it) these MTB actions/efforts are not quite represented in the HR received data.
Maybe (…maybe) a power crank/meter on the MTB might “solve” this “issue”. I think HR isn’t just
quite able to pick up quick actions/efforts like breaking away/power sprints on X/MTB/in common.

Cross efforts which gained real results: Shortly after having done a couple of X/MTB rides on hilly
and steep gravel/rock terrain, it was/felt very easy to break away from friends in a road group ride
after around 70km

. That’s for shure a fine effort/result for the road …from past X/MTB activites,
which surprised me personally but also the plain data/graphs didn’t show.

I guess the MTB vs Road subject (if it is a subject?) goes on/has to go on! And if you do ask a BMX
racer, it turns out these riders are the very best break away sprinters no data does know about

I have a 4iiii single-sided crank on my FS mtb, bought from reading the positive reviews from here , during one of the Covid lockdowns when my trainer broke and none were available to buy. Find it real doing intervals on hills, though you do have to see target power as a range rather than a single figure. Great for endurance rides and keeping power below a certain level. For group rides I don’t look at it!