These are all using the same TCX file from Garmin.

If I remember correctly, Xert adjusts your PP if the max effort lasts (just over) 5 seconds - your 5 sec best from TP might just not be recognised by Xert.

As to the moment of your BT: if you go to the activity details and select Advanced MPA, you can (at the bottom) click Previous - it will show you a different graph, showing your effort against your previous signature, where the BT moment will be earlier in the graph.

Thanks. Was able to go to advanced, and did see the peak in the Previous, as well as in the Power Curve too.

Wanted to make sure that it was reading my files correctly

@Cyclopaat is correct when he says Xert works on a 5 second (plus) peak but I still do not understand why Xert has picked up 686w and TP shows 864w. That is a substantial difference.

Does the advanced MPA sreen help you understand the reason @cjlebel? If so could you share the screenshots or link to the workout please as I woild like to understand the answer.

@johnnybike still don’t completely understand, but the numbers do seem a little closer to each other when I go to Advanced

Weird that the 5 seconds are so far off

I am not sure I follow. In your activity I can see the Xert reports a Peak Power of 908W. Which is the same as the Peak Power in your fitness signature. What was your Peak Power before this activity? Also is possible to see a 5 second average of 867W during your sprint. So to me it matches the numbers you mentioned you see on Strava and Training Peaks. 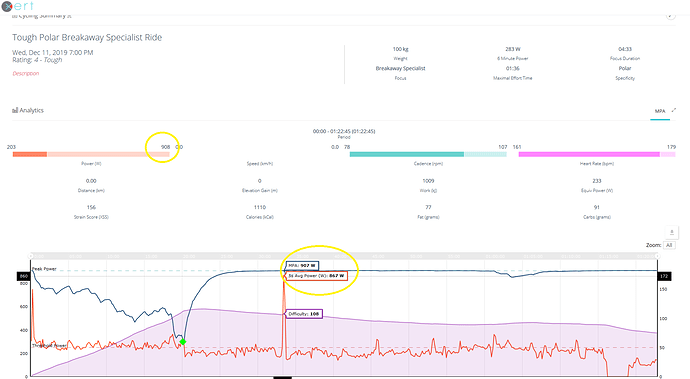 @johnnybike and @hezlava - Sorry and thanks for the help. Still new to the whole UI and what’s where and what’s what.

Bit confusing between the different views (Basic vs Advanced Current vs Advanced Previous) and how the numbers differ. Thought that the peak in Basic was my 1 second best, which lead to the initial confusion.

I’ll try to do some reading on here to get myself better acquainted with the application.