According to glossary, Xata should look 7 days back to calculate surplus/deficit and as Armando wrote a few time here on forum and said in podcast ep7, this difference will be erased in a week, week and half (e.g. any big training load - training camp - in a week, which causes deficit in a following week will come to normal numbers next week when ones come back to its usual working load.
Xert developers, Scott, please, this really cannot be explained or are there any hidden calculation you are not aware of? I know WKO+ which is more complicated, technical, but much easier to understand and learn, because its functionality is described and who is interested to dig deeper, can find manual to understand its advanced functionality. Here with Xert, its a bit approach “ready to go” (which is not wrong and make sense), but sometimes its like looking needle in a haystack, when someone tries to understand, why. (Hopefully we have Scott, who has all answers we are craving for

) XATA is is particular good example: even when I tried to gather all available info, I still get surprised, where xata and planner take these numbers from? can I get explanation why I see these numbers, without me trying to guess and hopelessly figure out - see please eificit and there are no workout planned since 18/03 - maybe 18days to erase dificit and start calculate from 0 + IR…? 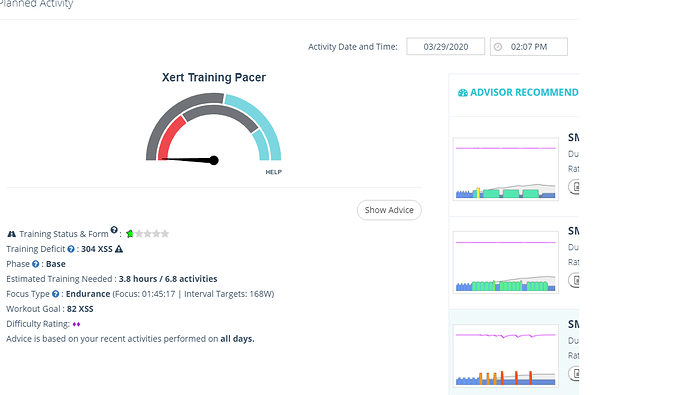 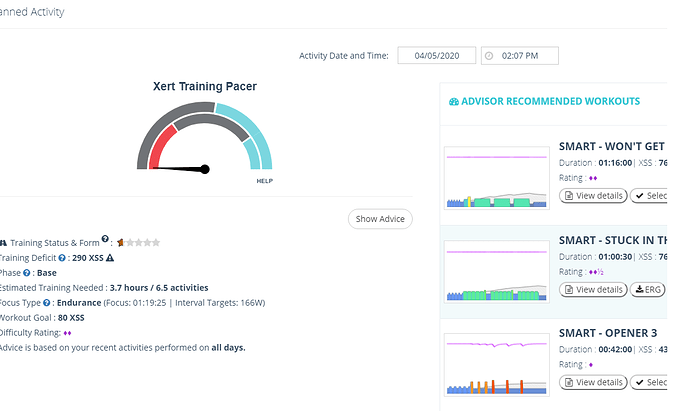 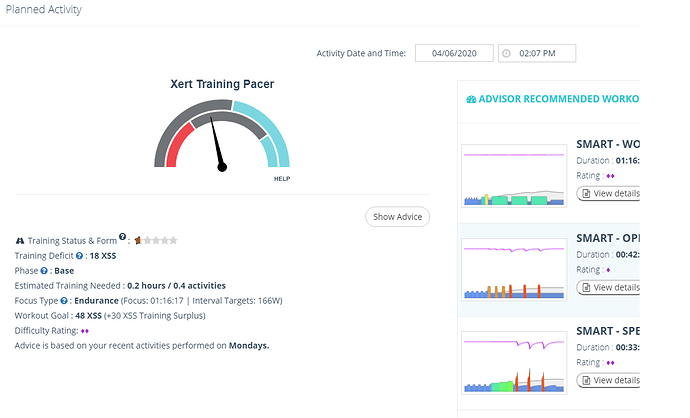 I think it’s designed to bring you back to your specified improvement rate over a period of days so as to not overwhelm you with massive target on one day. It also looks back to see if there is a trend in the XSS you do on particular days of the week ie it will factor in and “save up a bit” say if you regular do a big group ride on a Sunday. It will then “release” that saving on the Sunday. It’s not easy as it is a real moving target from day to day

It looks like you’re looking far forward into the future to see what the XSS surplus deficit will be. Since XATA is using a rolling window to calculate Surplus/Deficit, you will initially see a giant increase in XSS when you start looking 1 week out, since that XSS estimate will be based on the assumption that you’ve not trained for an entire week. Once you get past that week, the XSS deficit will decrease, since it is based on the previous week (during which no training was performed). Since XATA is still trying to get you to increase your training (according to your IR), the deficit will still grow a little, but not as much as the first week off of training. This is why we really dont recommend planning anything beyond 1 week, maybe two, into the calendar.

Conversely, after a large week of training, like a training camp, XATA assumes that this week will be like the last and so the XSS deficit will be rather large for the following week, since XATA is still trying to increase your Training Load by the constant amount (over last weeks training). After a training camp, it’s likely best to decrease the IR down to maintenance (or taper) for a week and resume your normal training pattern. XATA will then be back on track after that week. Hope this makes sense! Cheers!

but it doesnt explain that all deficit is erased on 18th day… I was not planning to take off training, only tried to understand how planner could work. Anyway, I will just reconcile that I will no know, how exactly I get these numbers, but will have faith in it.

The absolute numbers are rather irrelevant. We emphasize that the goal of the training pacer is to keep the needle approximately centered, meaning that youre not overreaching (needle to the right) or falling behind on your training (needle to the left).

I understand that 18XSS, I dont understand, that it drops from 290 to 18XSS in a single day and dont understand that small drop of XSS in those day before (e.g. between 05.04-29.03. no training at all, so expected to erase it to 0 and just increase deficit by IR).
But I will trust magic needle and it all right. Thank you for your patience Scott

If i can’t meet the demands of a 16hr week to keep up with Base moderiate -1 due to bad weather and tbh doing xert workouts aint gonna get me the IR or XSS from the week before (if they did i’d be in a body bag tbf). Is it advisable to move the IR to a taper or maintance or just leave it?

Thanks in advance
Gav.

Exactly. The idea with the XATA and the selectable IR is that you find an Improvement Rate that 1) fits in your weekly schedule and 2) allows you to maintain a steady improvement rate without dropping you into state of constant tired/very tired status. When you can no longer sustain the improvement rate (in terms of either total volume or intensity), you can reduce the Improvement Rate.