Why did I get dropped?

I went on a fast lunch ride today - it was going great until I unexpectedly popped at 20 minutes.

The group is organized as a rotating paceline, but with some hills sometimes you have to surge, but there are some turns where you can catch a bit of rest. I was feeling pretty strong aerobically and able to pedal well and take extra pulls when no one came around. But I was near the back at one hill and so had to dig kind of hard to stay in contact, and then a mile later we got to the bottom of a small hill and I had nothing and went straight out the back: 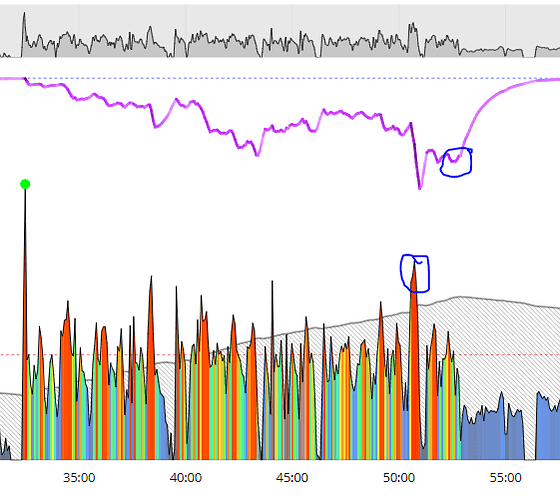 I’m wondering if any of the Xert team or those with experience has ideas on why I popped when I seemingly still had some HIE left? Maybe I just wasn’t used to the difficulty? I feel like my signature is solid, but most of my training and riding has been solo with more steady on/off efforts (whether 5 minutes at 110% or 20 minutes at 98%). I haven’t done as much stochastic group riding.

Thanks for any ideas!

But seriously, these things happen, for different reasons. You may have felt strong, but maybe you were more tired than you felt and you actually burned yourself too fast. Did you drink properly? I take it that for a one hour event, you will pop a gel or two, but not really eat? Given the intensity prior to the extra surge, that sustained last effort probably killed you. If that’s a one time thing, forget it, but if it happens frequently, you may want to adapt your training…

Thanks for your thoughts. Yes, I think I did burn a few too many matches early, and they crept up on me. I’ll try again next week and work on conserving in the first half.

I was also curious about the Xert model here - it seems that I had HIE left, but perhaps I was lacking in “hardness”? Still learning the concepts.

Yes. Ability to handle higher difficulty scores or “hardness” is something that you’ll recognize as you see in this ride. Overheating is a common challenge athletes face. Other things that can impede your ability to reach a breakthrough could also be the result of things like a change in power meter, lack of calibration or in some circumstances it could be the choice of gears, i.e. cadence choices. Trying for a breakthrough at 50rpm for example, is likely impossible for most athletes. Having periods of too high / too low cadence during an attempted effort for breakthrough will also likely influence a possible breakthrough. This is most notable during short, sub minute efforts but is a common issue for some athletes.

Thanks Armando, this is really helpful.

There’s is another problem with these longer effort not too far from TP.
If I take my example, with a TP of 278W and a HIE of 22kJ, if I push 296W for 20 minutes I’ll hit the MPA.
But let’s say Xert overestimate my TP by 5W (only 2%). Then I’ll have emptied my HIE after only 16 minutes… If the powermeter is just another 1% off (just a temperature difference can cause it), and the 296W are actually 299W, I’ll blew after 14 minutes.

That’s exactly what I observed when I tried one of my favorite climb, which lasts around 20 minutes, after having all my breakthrought on shorter efforts (6-9 minutes). I was nearly done after 17 minutes and my MPA had decreased by around 20% only. I was very impressed with the accuracy of Xert which gave me an accurate target for an effort duration that I rarely do.

Still: reaching our max on a long effort is a very different skill from pushing full gas for sprints or shorter climbs. The good news is that it is not something we need to train, just to learn. It is never lost.

Good thoughts - I bet we each have an optimal duration and style of achieving a breakthrough, so when we do a different type of effort, our ceiling may be lower.

I’ve also wondered about a different problem on long climbs and that is altitude. I live at 5500 feet and if I want to do a 30 minute climb I’m gaining 2000 feet, which is going to mean a 2-3 percent drop in power according to what I’ve read.

Seems to me that the models PLUS experience is the way to proceed.

Great point and something that I’ve suggested many times. Xert’s predictions whether it’s your best X minute power or even predictions of changes in your fitness signature based on your training, act as reference points or baselines on which you can compare others efforts/fitness changes. If you can find a way to beat what Xert is predicting, you’re onto something pretty unique. This isn’t common and some say near impossible when things are properly dialed in. On the opposite side though, if you can’t achieve what Xert is predicting, something’s impeding your performance and we help you first recognize it and then enable you to do more introspection to uncover what these limiters might be.

Excellent thread and points in this discussion.
What I love about Xert is that it provides the best calculated guess of the athlete potential at any given time and something to shoot for.
There are always many reasons why sometimes we can’t hit that mark (mental toughness, additional life stress and recovery come to mind) and why sometimes we can exceed it.

Yep, sounds like altitude got you. Don’t underestimate air density.

Hi Brandon. Excellent question and thread so far. I agree that our Xert model is pretty solid in its prediction, but there are many possible reasons why you may not match your MPA/power at the point of being dropped. As discussed here, these include cadence, positioning, hydration, fueling, and also psychological. I’ve had the same experience at a super-hard race on rolling roads in the cold. I actually had a breakthrough and MPA/power match on one section of rollers where I got dropped briefly but caught back, and about 15 min later got dropped on other rollers where I still had MPA to spare. Just remember that MPA predicts your physiological capacity, but whether you’re able to fully access it is dependent on many situational factors.

Hi Stephen, thanks for your thoughts. I agree about the reasons, and those aren’t always visible in the data so can be harder to see.

Here’s one from last week where I think I know the reason is shown in the data. I was pacing myself to a new PB on a nearby climb and was doing really well, until I hit the steepest ramp, where my cadence (and power) tanked, and my MPA curve started to go up rather than continue to draw down.

I feel like the MPA model is a great way to find things to work on - in this example, I think I need some additional low cadence strength. 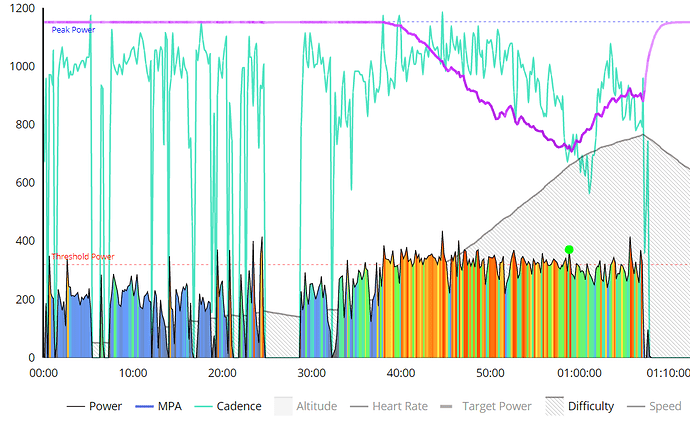 Excellent observation and fully agree that it’s likely because you got bogged down with steep grades and low cadence. Also fully agree that analyzing MPA patterns like you have can definitely tell you a lot about things that need to be worked on.