I am planning on doing the Hotter’n Hell Hundred, in Wichita Falls, TX at the end of August. I have the lofty (maybe impossible for me) goal of doing it in 5 hrs. The event is still a good 6 months away, so I created a fake date for an event 120 days out, to put myself into the base phase, which I plan on extending until the base phase for the real event starts. I have been in an extended base phase since December (ish), using TrainerRoad, with a pretty good dose of their Sweet Spot Intervals (88-94% of FTP). I just started cycling back in July and have had steady improvements so that I can now ride 60 miles at around 18-19 mph with my main riding buddy, who may or may not be trying to kill me.

The August event and goal is important, but I’m not a racer, just mainly want to ride this summer with the local “fast” group and get a little sweet revenge for the butt whooping they put on me last fall

What should my focus be at this point, in order to achieve both, if possible?

Here is my current status: 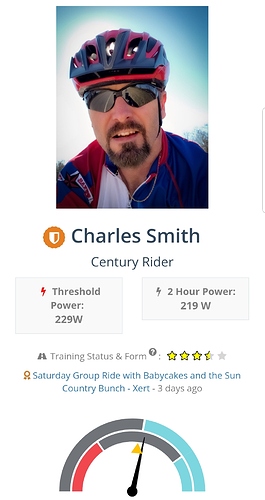 You have a relatively high training load at 3.5 stars so it’s going to be hard to keep the training load progression going up until August due to available hours. It might be better to plan out two training cycles (so two build phases) with a short break in the middle rather than one long progression.

I’m interested in @xertedbrain 's view on this one as I struggle with this question every year too.

Thanks for the guidance! If I did 2 training cycles, would it be bad to focus on something like Breakaway Specialist for the first one, the Century Rider for the second?

@IAmHolland How does one switch to a Build cycle later on? I thought you had to go through base each time.

I am guessing that you would bump the date of your event forward, to trigger the change to build?

Somebody with greater skills than me needs to create a Google speadsheet that makes this sort of planning slightly easier. Bonus points if it has options for the various improvement rates and required hours / XSS per week.

@IAmHolland Lucky for me, the route is really flat! The biggest challenge, from what I hear (my first time to ride this event), is the 100°+ temperatures and/or the wind.

This is an area where Xert can do some work on the interface.

Yeah, y’all have done a great job with Xert. I can see how it might be intimidating for some folks, but I love all of the data. I’m an engineer, so go figure!

We love to go figure.