Given that your TP is proportional to your Training Load and that at some stage you max out on hours and Training Load, is the TP you have at that point your maximum and if not how do you go about improving if and when you get to that stage?

You can increase intensity, which will not cost more hours, but will increase your TL. Your TP is established as an equivalent of FTP, so for a set duration, usually less than or about an hour. If you go hard(er) during one of your sessions, your TP will still increase.

But yeah, there will be a point at which it’s going to be (near) impossible to improve TP, although that is not limited by your TL. You could do 1 or 2 hard 1+ hour rides a week and increase TP, but your TL will be stuck at a low ‘star level’

Why is TP proportional to TL @carytb

Clearly they are related.
Take the case of a brand new athlete who has not trained at all ( - he might do a FTP test and get 200 or even 250 watt as an FTP/TP) - that is not related to TL in any way.
TL is finite for most people but training quality could be increased without changing TL

But if this same athlete begins training consistently, TL will go up. As TL increases, a concurrent increase in Fitness Signature is expected.

Clearly there has to be a starting point. Everybody has an off the couch TP but if you train consistently you will get fitter as expressed by your TP. If you train intelligently you would expect to increase your TP by a greater amount than if you just Ride your bike for the same increase in TL. Although anybody getting off the couch would probably see great initial gains just by riding their bike consistently. It’s the training intelligently that’s the tricky bit. Hence the profusion of training platforms, systems and philosophies.

I agree. The living example of that is myself. Last 10 years untill last winter I made a huge amount of weekly km’s (>12hrs/wk) without being bothered by polarisation, high-mid-low strain, etc. etc.
As a result my FTP was for years the same and I wasnt able to increase it (wasnt much focused either).

Then last summer I started to use Xert again and as a result did less low intensity, but much more high intensity training (polarised) and as a result my TP went up from 215 to 240 and stayed there since. My workload is more or less the same but there is much more intensity trough workouts and Zwift races involved. Before I never did a workout but was mainly doing long training rides outside.

During the winter we do something called Fox Hunt. These are short outdoors races (~50km) where you have to follow arrows and can score points by finishing in the top 15. The competition continues during winter and at the end there is a podium.
After my increase of TP and HiE I was able to outride many of my competators which I couldn’t before. I think a lot friends where thinking I was doing Chinese EPO or something like that 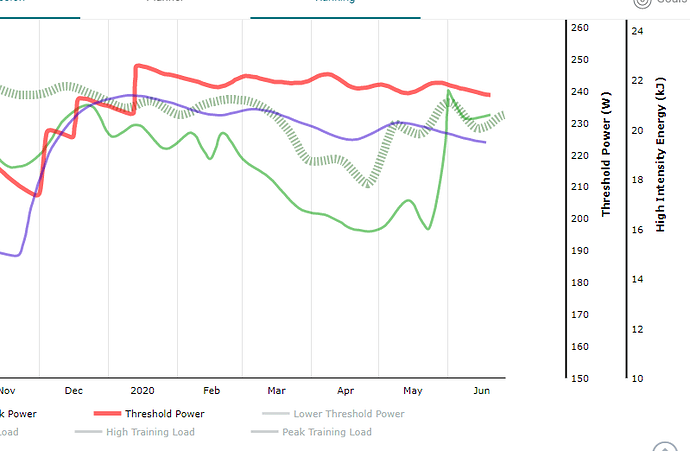 Good progress, but as mentioned, if you want that to go up more, you’ll need to increase something.

There’s only so much to be gained - limited by factors mentioned before.

Cary was wondering how to increase TP, while being limited by TL. Gains are still possible, but it’s not a question posed by a starter getting off the couch.

Neither are you Johan, but I guess you get my point

Cary was wondering how to increase TP, while being limited by TL.

To my knowledge the only thing you could do is trying to increase your intensity. But only to a certain percentage of your TL before it gets counter productive. You need to have a minimum of low strain TL as a base. I guess it’s like a pyramid. There is an optimum between the base and the hight of the pyramid. If you make it to high and the base to small it will collapse.
If you already reached that optimum then the details become important like few grams less weight, a little bit more aërodynamic, etc.

is trying to increase your intensity

That’s what I started with

That only makes you (slightly) faster; weight for climbing (Watts/kg) and aerodynamics for TT’s.

So the conclusion is…
We are searching for the Holy Grail?

Lol. Is there a hidden link from Robert Rijnders to Robert Langdon?