This workout is brutal!

Idk… I’ve never let myself actually go do this ride. Though i have had it on my to do list many times…
It’s like death by a hundred bee stings! I’ve never seen my hr fluctuate between endurance zone to just under threshold zone so rapidly and so many times in a row…

Idk… my low training load is much higher than my htl and peak training load… i feel like this causes some discrepancy where i need to get a lot of xss but then actually pulling off a ride in the right Target focus duration is just very difficult… but i guess that’s a sign of starting the build phase right?! 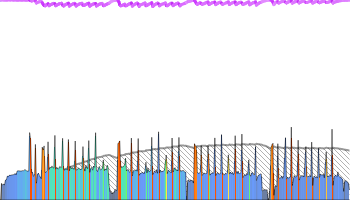 Going solo for longer distances requires proper pacing. Go too hard, and you run out of energy too early. Go too easy, and you give up too much time. This work uses small bursts to decrease MPA and give your Low Intensity system a bit of a boost,...

For sure not an easy workout, especially for 2 hours. I guess you’ll be yellow status for a while now if you check the planner? It isn’t easy to follow XATA and build high and peak strain from zero, as your high and peak form easily goes negative, and it can take ages to ‘recover’. Was it a recommended workout actually

Do you do this in erg or slope, and did you execute ‘precisely’ in slope? Only ask as focus is lower than what mine says in workout builder (mine says 13 min vs your 10 min), and your ride seems to have higher peaks and lower ‘recoveries’. Could be execution (if you go too hard in the ‘on’ part, the recoveries will have to be lower to allow MPA to recover), but could also be signature differences (you have relatively higher HIE vs TP than me)… difficulty score looks about right though

yeah XATA recommended the 90 minute version of this, so it was a little bit of a stretch goal to make this one happen for me. I will have blue stars on Monday assuming i only generate low XSS this weekend. that’s not too long… i’ve certainly had worse after a race… like 2 weeks of yellow stars… lol

i chose to do more because i felt good, and trying to get extra XSS to stay on top of my deficit because i haven’t had a consistent week due to external obligations on tues and thursday where i couldn’t workout. I also considered doing do a shorter duration climber focus workout plus a longer low XSS ride back-to-back but I was feeling a little time crunched.

good point about the focus duration being lower than the workout is on XERT,. I can see that i generally brought my MPA lower than the prescription. I think i am just a little bit more old school, and would prefer that when the workout calls for me to go do 20s intervals, I just go do them and use some kind of RPE prescription to tell me if i go “all out” or “try to be conservative” or “treat them like little jumpstarts during a group ride rotation”… or “ride like you are applying mini attacks to the peloton”

You got the desired training effect for this workout.

Duration target results will vary depending on signature, spider chart profile, form, and TL.
You could say you were closer to the mark at 9:58 than the rest of us.
My predicted results at current sig would be 12:38 in AUTO mode.
In Feb last year (during a TED progression) I hit 13:49 on this workout. Two months later I hit 11:30 when TP and TL were higher.

I wonder if could ride this workout in slope mode on EBC as a viable method of learning the free ride to focus process. What’s missing is the constant grade changes, and the intervals would be regimented, but the procedure is the same as outdoors.