I have a wahoo kickr, not sure of the model. Trying my first indoor workout with zwift running and I can’t figure out why the resistance of my trainer keeps getting cranked up so hard I can hardly pedal. I was running IOS app with trainer control while also turning on the IQ app on my garmin so I could record there and also have the data saved on the garmin.

I finally had to turn everything off after trying everything I could think of for an hour and just ride zwift. Trainer works fine with zwift in control. What is going on?

You don’t want to run both Xert app players at the same time.
The Ultimate Guide to Training with Xert and Zwift – Xert (baronbiosys.com)

I assumed that may be causing a problem so I turned each one of them off indificually, restarted them, restarted the workout multiple times, nothing worked. Each time my trainer resistance would crank down that it would take 250 watts just to turn 30 rpm. Completely ruined my workout and my riding today.

I’ll try playing with it again this evening only using the IOS app. Xert isn’t usable if I can’t get these apps to work easily and correctly which is frustrating.

The principle is: just make sure only one device / app is controlling your trainer (but you can connect to as many as you like to share power…)

If you are using the iOS app to play workouts (which is better than the garmin), that is what should control the trainer. Zwift should not have the trainer connected, only powermeter. And you can then just record the ride on your garmin separately / without the iq app. Just make sure your trainer is connected to the garmin as a powermeter (assuming you don’t have a separate powermeter) rather than a trainer, and that gps is off, and record the ride as you would outside

If you have paired multiple apps in past via Bluetooth and any are running while trying to connect to one app, the other apps will play tug-of-war with the connections.
For example, if Zwift was previously controlling the trainer it will try to connect to any previously paired devices upon startup. Ditto with iPhone and Garmin device or multiple Xert apps running at same time.
Suggest you keep it simple and start with one test configuration.
Turn off the Garmin and close Zwift and EBC if running.
Start Zwift (laptop?), make sure trainer control is disabled and past connection is cleared. Should only be paired to power meter for virtual world action.
Start EBC on iPhone and confirm sensors are paired for trainer control, HR, cadence.
Start the workout session on EBC.
Arrange Session Player pop-outs over Zwift if that’s the setup you’re shooting for.
Does this configuration run as expected?

ok, gave it another try this evening to try and get things working for the next workout. I only turned on the IOS app, nothing else initially. The IOS app was controlling the trainer properly right up until I needed to make a max sprint effort then it locked it down so hard it took all my body weight to get it to turn over in the tall gear I was in. I shifted down as fast as I could but could still only turn an easy gear at maybe 30rpm at 500+ watts. I stopped the workout at that point after it did it again on the next max effort. Normal? Can I just put my trainer on some resistance via the IOS app and control the difficulty with my gears? Once I felt I had it working correctly I turned on my garmin normally to record data, didn’t use the Xert app. I can’t tell if the IOS data uploads to Xert? I did save it after pausing.

I realized zwift isn’t necessary, rather just have something on the tv and focus on the workout. I’ll use zwift for endurance type rides when the weather is bad. thanks for the help.

Thanks, I did figure this out along with the advice here. Still the one issue I mentioned in my other reply to ridgerider2, when I needed to make a max effort the IOS app increased the resistance so high on the trainer immediately that I couldn’t turn it over. I don’t see a way to do the workout with it doing that, even in one of my easiest gears it was taking 500+ watts to barely turn the cranks over. The rest of the time the IOS app worked fine with everything else left off.

Which workout were you doing?

If there is a big jump in required wattage it can be helpful to spin up / increase cadence just before. Have never had that issue though (more an issue at end of super hard intervals than on transition)

If you prefer to use gears to hit power you can change from auto to slope mode for the whole workout. (Can be harder to follow interval targets when they are curved or ramps, and potentially annoying for v short intervals, but otherwise there can be advantages to doing that e.g. it’s more like real life)

common with many smart trainers.

The rainbow gauge with CO is something you can pop-out and overlay on Zwift. 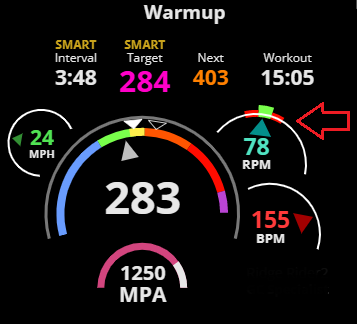 I forget now, I wasn’t able to finish it due to the trainer issue so it didn’t save as that workout I guess? It was one of the breakthrough workouts. I’m going with slope mode from now on.

I’m having to shift gears in ERG mode anyways, so there is no difference. I’d much rather control my cadence with my gears than be surprised in an instant then struggling to get into a gear I can actually pedal and missing a big part of the interval anyways.

that interface is different that the one on the IOS app? I didn’t see a cadence gauge but possible I just missed it. I’d much rather just control my own cadence and do everything on a slope mode. It’s not like ERG allows me to never shift, I’m shifting all the time. This would eliminate the entire workout being wasted because Xert freezes up my trainer on a final max effort for a breakthrough.

I thought the top meter on the IOS app was MPA? I went above that and held it a couple of times for 5-10 seconds. However, when looking at the data afterwards it says I was no where near close to MPA?

You are in control of your cadence at all times. The CO simply shows you what you normally spin at for any wattage/torque level so you can prepare for a jump in resistance before it hits. In practice this becomes second nature during transitions from low to high watts. Rev up before the wall hits.
It’s your trainer that causes this issue as noted in this link from Wahoo.
You can ride all workouts in Slope mode if you prefer, but AUTO has some distinct benefits depending on workout goals.

If you have a BT during a workout your signature is adjusted when the activity is analyzed. Moments where MPA flatlined won’t appear with the updated signature applied, but there’s a button below the activity chart labeled Previous. Click that to see your performance against prior signature.

I was finally able to complete a workout with no issues. I used slope mode and that is what I will use for now on. I prefer to control my cadence etc and it’s easy to do with shifting. I can shift and rev up before the harder interval without worrying about what resistance the trainer might add. I’m sure this is a personal preference.

So I should be playing the workout on my PC? I see the “play” button but how do I coordinate that with the app? I’ve asked on the forum as well as emailing Xert about ipad issue, I can’t get logged in and I’ve tried everything. Works fine on my phone. The bigger screen on the ipad would make it much nicer and easier. I’ve got another question on the actual training but I’ll start another thread to keep things separate. Thanks for your help.

So I should be playing the workout on my PC?