I almost cycling the whole year trough and my Training Load it is not often below 100.

Last weeks I was trying to figure out if and how I could optimize the way I train (polarization) to improve my TP. That’s when I only realised that my TP was decaying constantly due to the setting of “Optimal Decay - Default” in spite of the constant Training Load I was producing. So my TP was only as good as my last Breaktrough (in my case 4 weeks ago) no matter of all the Training Load done since (not reaching my actual TP). I felt like I had to constantly proof myself while doing efforts at a constant level.

So i decided to change my Decay to “Small Decay” which to my understanding would fit my constant training load beter in order to show a realistic TP.

So what do you think? Given my circumstances was this the proper thing to do or are there any other factors I should have taken into account?

It’s not your TL itself, i.e. the number, that should be considered, but the way you achieve it.

You can do 7 normal sessions a week, three really hard ones, or a mix of both. They may all give you the same TL, but your signature decay will be different and you will trigger more or less BT’s, depending on the scenario.

How did you achieve your last BT? Because you happened to push a little harder that day and since it (your TP) had decayed, you just got one ‘for free’?

I do understand that besides TL number also the amount of Lower, High and Peak load needs to be taken into account.
My last breaktrough was because I pushed real hard during a Zwift race but my TP had not been decayed: 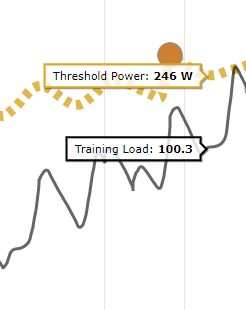 But after that my TL not really lowered but my TP did due to decay method. 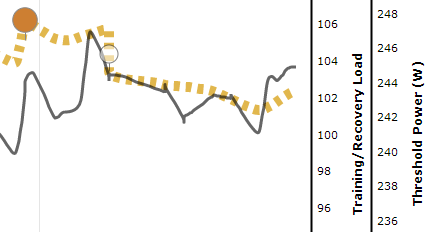 This made me feel that I really have to prove myself again altough I kept the the TL on level.
So the effect of the standard decay method is that you need to prove yourself constantly in order to keep the TP on the same level.

The assumption here is that my TL (and the breakdown in Low, High and Peak) is sufficient to keep the TP (more or less) on the same level but the decay method is what is causing the TP to decrease.
Problem is that this is something I cannot prove. It is just a gut feeling.
That is the reason why I changed the decay to “Small decay” to bring the TL efforts more in line with the decay.

If you don’t use it, you lose it

Since you are not increasing TL, Xert probably figures you are in base or even recovery, so without hard efforts, you’ll lose it.

Seriously, this is a problem you are not the first to wrestle with. In your case, I would probably switch to no decay, but that is not advisable for a long period of time either.

The best thing to do is to force a BT every now and then, but maybe small decay would be the way in the middle - @ManofSteele, what do you think?

Thanks guys for your feedback.
I gave it some tought and decided to switch back to the default decay setting.
I probably just have to harden the f%k up and put some hard efforts in every now and then

After I posted this message I did a Zwift crit race and got an BT. And all the sudden the world looked much better again