Since I’m not the ‘lucky’ owner of a Garmin device I never had the pleasure to test the segment hunter feature, but I would like to know more about the philosophy behind it.

The traditional approach is that holding your power as close as possible to the value from PD curve for the target duration of the segment is the way to go. Does the hunter dynamically adjust the target to bring you closer to that average value if you’re going to hard and vice versa?

In particular with variable grade segments there are different strategies.
I have a 2mi@9% followed by a false flat 1mi@3% then 2.2mi@8%

The whole thing is between 35-40min for me @190lb and 305W FTP, so targeting for an average ~FTP makes sense, but if I look at it as two intervals with a break (16min/3min/16min) then the result can be very different. Without entering aerodynamics discussions, I’m curious from an energetic perspective (which in the end determines the outcome of a climb) if I can extract more energy in two intervals with a partial recovery in the middle, vs a steady constant pace all the way.

Would be cool if the segment hunter (on the web site at least) could provide some guidance. 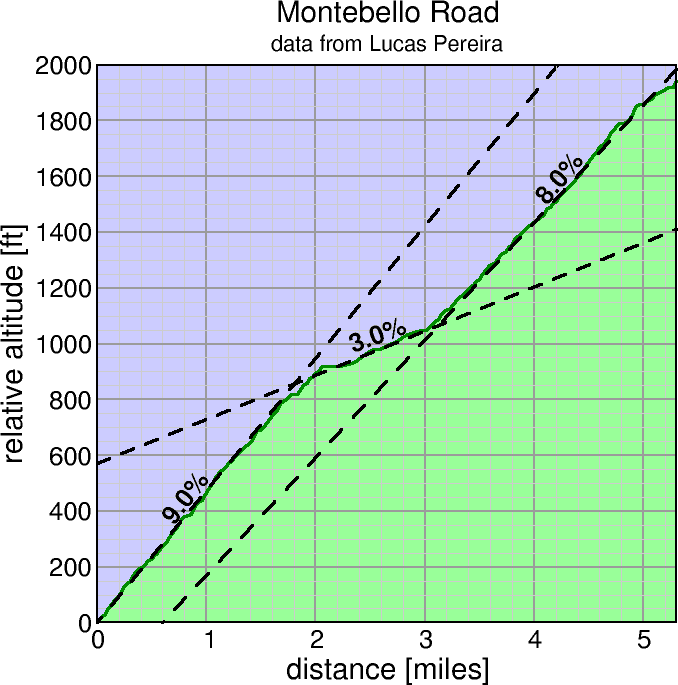 I have never understood how segment hunter dictates your power output(s). Since it doesn’t know the weather circumstances, I can keep pushing a number close to my FTP against a head wind an never hit my goal. I may get a BT though.

The same course with a tail wind, may give me a better than expected time, with no BT.

I can set the target (time) as close to the start of the segment as possible, factoring in the circumstances, but then what’s the point of segment hunter anyway?

From my understanding of BBS, their model is mostly tailored toward aero/TT type of courses, not climbs. In their model they assume you will be able to crank out your FTP all day long. The optimization takes place mostly on the speed side and the resulting plan is more a “where to pedal hard” vs “where to save”

In a climb, ~90% of power goes toward gravity. The amount of energy needed to get to the top of the hill is then pretty much fixed, regardless of your speed (except for the 10% part that is aero and rolling resistance).

Divide that energy by your average power and you get time. Highest average power, gives you the fastest time.

Now if the clim is less than 1hr you should be able to go harder than FTP: the XERT model predicts exactly how much harder you need to go to have a breakthrough right by the time you cross the line (which assumes knowing your target time)

That’s why I was curious about the hunter actually worked. Sounds like I can estimate the same plan by creating a workout with a single step of target duration and MPA reserve = 0% (or just use PD curve)

their model is mostly tailored toward aero/TT type of courses, not climbs. In their model they assume you will be able to crank out your FTP all day long

Nope. I’ve used it succesfully to pace my Marmotte in Austria, back in 2017. That was, like any Marmotte, mostly climbing - in time anyway, as going down seems to be a lot quicker

Not nescessarily - first off FTP is not a Xert term, but even if you want to use it and only in its classical meaning, then yes, maybe.

But, even FTP is now more generally defined as ‘sustainable power for somehere between 40 and 70 minutes’.

For Xert, you should look at 1 hour power - if you exceed that, you get a BT

We have a video on the Segment Hunter that you should watch. You’ll see what it does. For flat, straight, simply courses/segments, it just targets your MMP for the effort and you can just follow that. But more technical courses with coasting and rolling hills, it will adjust targets on the fly as you do them, accounting for all those harder and easier efforts to give you a target wattage based on MPA. “Breakthrough through on the line” means that if it is pacing you near the end of the course at 450W, your MPA will end up at 450W as you cross the line.