I think that because you got a BT on your first activity, your signature was updated before the second entry.

One activity is before BT the other is after BT if this makes sense.

I would recommend you to delete one of them. 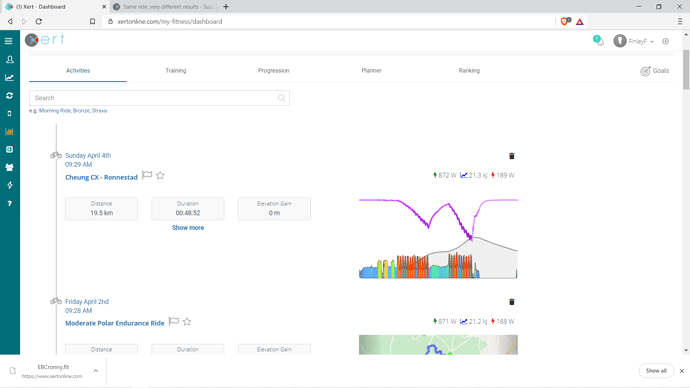 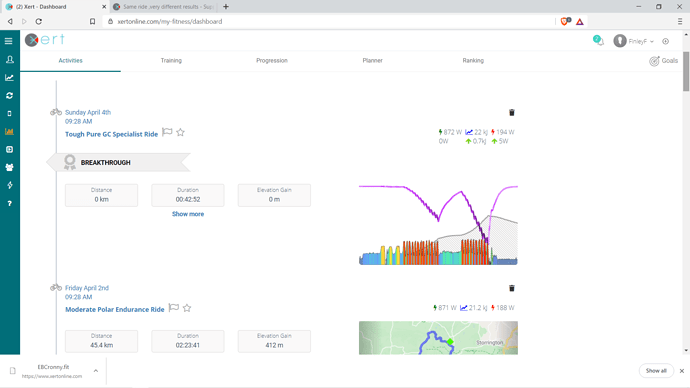 Garminronny1920×1080 207 KB
This is what I thought at first. but I loaded them individually and they are still very different. Probably should have said that first.
Maybe one is right leg and one left

I believe it is because the Garmin app cannot analyze the data to the same extent as EBC or XO.
Note this FAQ –
My Garmin said I had a breakthrough but when I uploaded, it wasn’t there. What happened? – Xert (baronbiosys.com)

Surely that doesn’t make any difference as it should only affect the reporting of a breakthrough on the device. Everything gets recalculated afterwards on the server to get the most accurate analysis. It looks as though the raw data is different:

This can lead to only one conclusion: the Garmin was recording higher values that Xert EBC.

The question is why - what’s going on with one or other of these devices that it isn’t recording the data in the same way. Not sure what the power sources are. Are both data sets coming from the same device? Is it a smart trainer or a power meter? If it’s a power meter it could be that the garmin has the wrong crank length and is exaggerating the power, leading to a breakthrough. Not sure.

Hopefully @FinleyF can shed some light on exactly how these were recorded.

If both workouts were loaded into Xert workout players (EBC and Garmin Connect IQ) would they normally have same name when uploaded to XO?
Or did XO rename the one from the Garmin?

Only one app could have had trainer control so the other must have been connected to the power meter on the bike and powermatch wasn’t in play.
Is that the likely explanation for the difference? 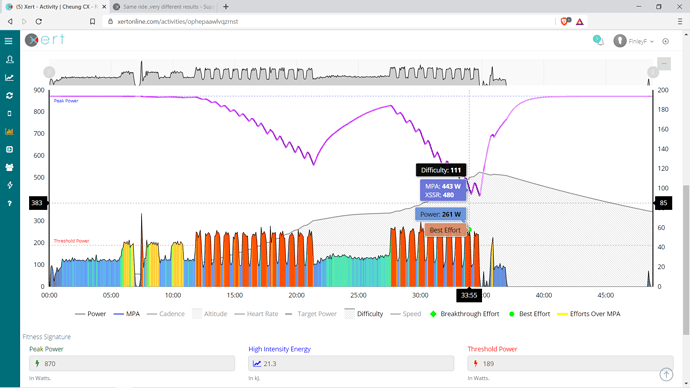 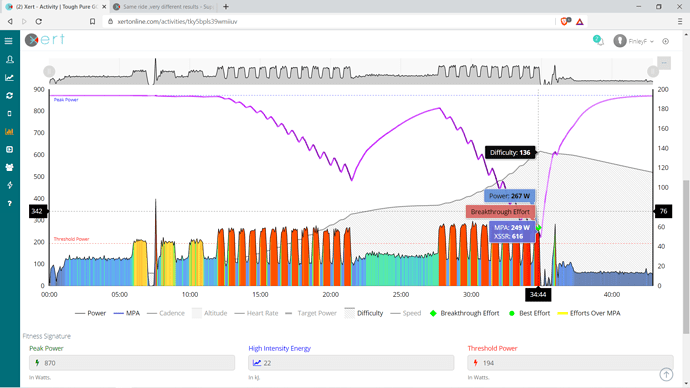 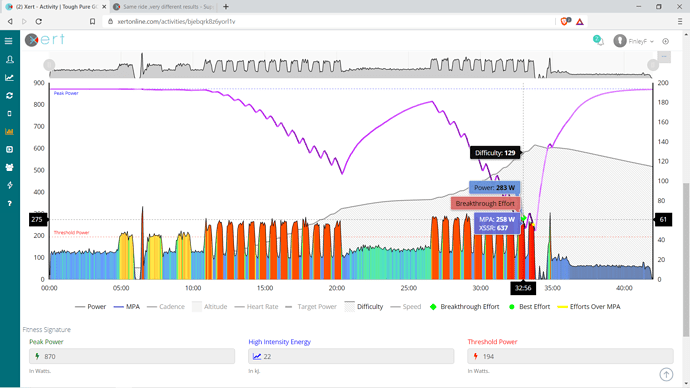 The above were all loaded into Xert Individually

EBC had trainer control of an Elite Direto. A Garmin Edge 530 and Zwift were recording as backup / entertainment. No power meter. All ant+. All most likely started at slightly different times.

Resistance was turned up to 110% for the second set to make sure I got a breakthrough / failure.
At failure EBC was paused so I could soft pedal. Garmin and Zwift would have still have been recording. It took me a while to work out how to stop EBC as it’s new to me.

Using the scientific best of 3 (and near MaxHr) I would have said I got a breakthrough but there is something weird going on. Any ideas?

I assume you checked that the reported power in the second set of intervals is the same across the three recordings? (Also for the first set for that matter). You can check by highlighting relevant parts of the chart.

Any chance that EBC is somehow dividing power by 110% due to some incorrect application of your intensity adjustment…?

Did you also scale intensity in set one? There seems to be an MPA difference there too - EBC is above 500 despite a slightly lower signature, while others are below

Send support@xertonline.com both FIT files recorded. Devil is in the details.

Resistance was turned up to 110% for the second set to make sure I got a breakthrough / failure.
At failure EBC was paused so I could soft pedal.

Is that how you normally trigger BT’s on workouts versus changing to Slope mode?
With Slope you can go as hard/long as you are able at any point.
I would think that provides a different data set for establishing BTs.
Pausing EBC at failure point may also be a factor. 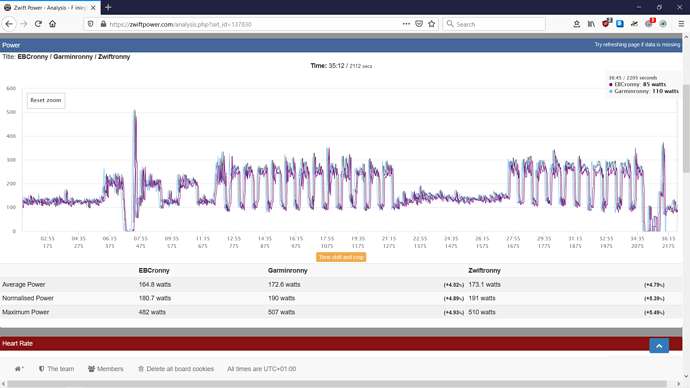 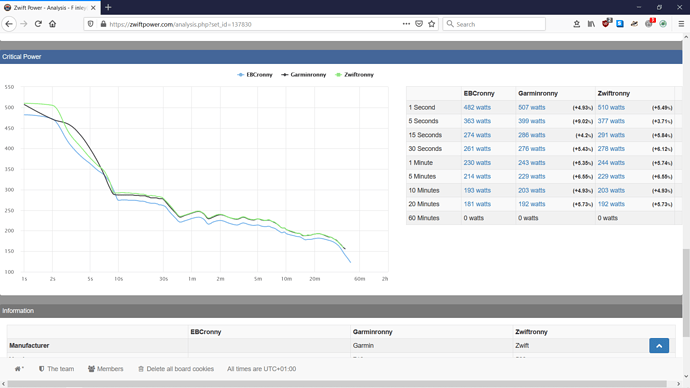 Those are substantial differences. I’m no expert but i do use the xert ebc app both indoors and outdoors on an android phone. Does this mean that the ebc is measuring low? It would be interesting to compare the ebc numbers with dc rainmakers power comparison tool. 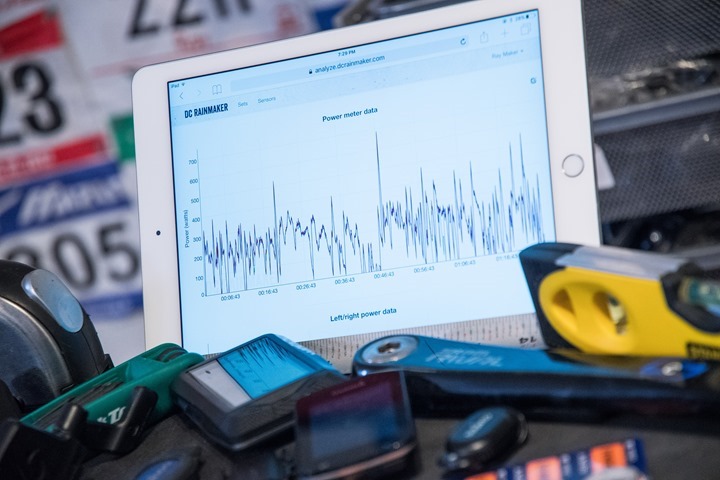 Wanna compare GPS, power, heart rate, cadence, and other sports tech data? The DCR Analyzer is the tool to use for investigative analysis!

Using the DCR Analyzer Tool would have been interesting but unfree.

Scott is now looking into it so hopefully I’ll soon be able to see what I have done wrong.

I think we’ve tracked the issue down! We are going to do some internal testing over the next couple of days and the fix should be included with the next update! Cheers.