I’ve read as many user guides as I can and have a basic understanding, but something is not right.

On Zwift I think it has my FTP at 202W or something.

Anyway, did the workout and it comes back at a whopping 351 XSS, not the 121 XSS that the workout mentioned. I had the Xert data screen running on my Garmin (not the workout player, just the data field) and I was at Breakthrough over MPA for almost the entire ride. Afterwards Xert bumped my TP to 182W.

A few thoughts with a question:

Two things going on as far as I can tell:

With a peak power of 1200w I think it highly unlikely your TP is 165w. Not impossible but unlikely
As Wesley says, you need to adjust TP to match FTP or vice-versa.

What was the highest TP you have had in Xert - has decay reduced that because you have not had any breakthroughs?

Thanks all, I contacted support and the conclusion was exactly as you each said. I also had Strava synching EVERYTHING vs just rides (including my rowing sessions on the water, hikes, bike rides w/o power, etc). I removed all those and am closer now. I don’t want to drop the Zwift FTP to the Xert TP as that will make workouts within Zwift a little too easy, so hopefully I can do a suggested draw-down breakthrough and get Xert in synch. After removing some of the above files it took the latest breakthroughs away, now my last one is four weeks ago.

The highest TP shown in my activities table is 195W. It looks like it gets greatly reduced anytime I do an easier ride, should I flag those rides not to be considered?

It looks like it gets greatly reduced anytime I do an easier ride, should I flag those rides not to be considered?

No, it’s actually not reducing due to the ride being easy, it’s just signature decay. If you are only doing base / endurance you can change the decay setting to ‘no decay’… but otherwise leave it… and do a breakthrough effort every now and then (and probably now if it’s been 4 weeks and feels low still)… more detail here:

The Signature Decay Method (found under Account Settings / Profile) identifies the algorithm that will be used to model the detraining effects that occur between your activities. For example, if you go four weeks without training, the Fitness... 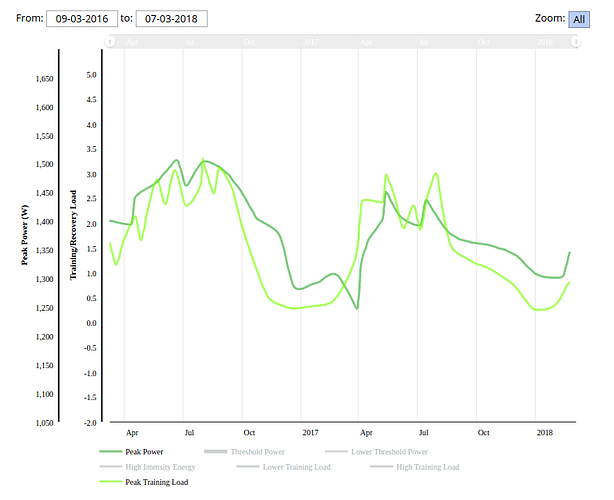 Xert was first to introduce the idea that you can obtain fitness information from regular activity data.  We then introduced the idea that your Threshold Power could be calculated in real time, on-the-fly, as you ride.   But in the...