Hi there, the following is my current rankings (Elite, Male, Forever). I am not getting much comparison due to the rankings saying I am in > 80th percentile for everything except time trialist, century rider and triathlete. 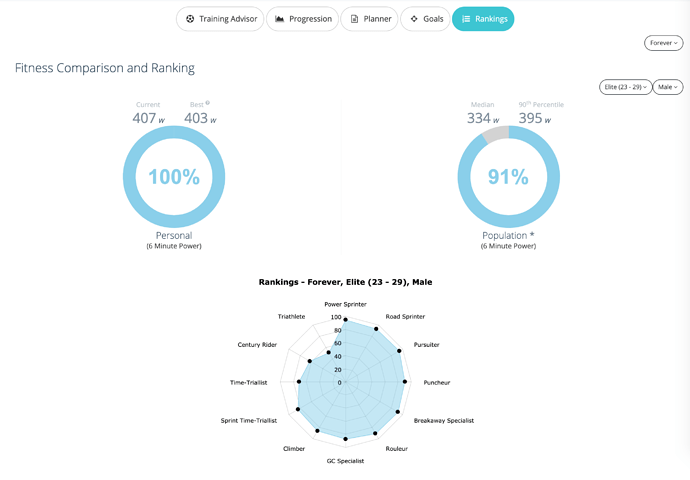 Is there any more data to base this on? I have only started training 5 weeks ago and being at the peak of nearly all these different classes gives me little info to base my training on. I’m relatively fit but it does seem odd that I am so high in all these categories. What is the total number of data points you have may I ask?

In my understanding, Xert’s training advice will be based on athlete type and event type / target date. The areas in which you are ‘weak’ have long power duration curves, i.e. 2, 3 hours. You probably do not ride long events with that focus. If that’s not your target, just follow the advisor’s recommendations, otherwise change your focus.

For instance, I never sprint, or at least never ‘all out’. You can tell by looking at my web… 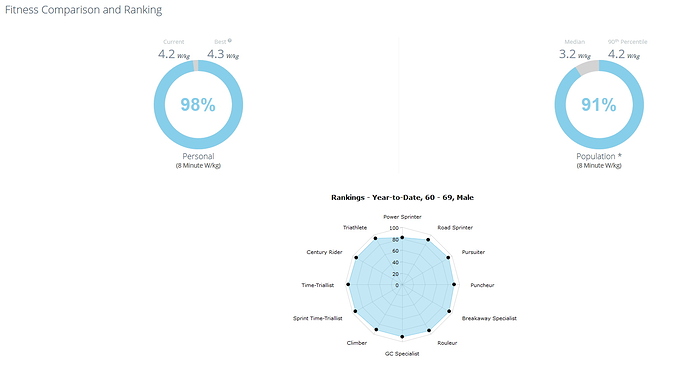 Yep I understand, I’m more confused by the fact I’m scoring so highly in everything. And so are you, even in your worst ranking as power sprinter you’re better than 80%. Which somewhat makes this data not so valuable. Perhaps it would be better to compare to a few different levels of athletes, such as different category racers or even the pros, so that you can actually gauge improvement.

I suppose you’re right. I never pay much attention to stuff like this anyway, as I know my strengths and weaknesses (don’t ask my wife, she wouldn’t agree). Part of the reason is that I do not really understand how to read it, and even if it means I’m better (at some disciplines) than 80% of the rest of my population, I will never make a podium. Also, because I don’t race, but that’s besides the point

@Cyclopaat You’re definitely in the top range for your age group! @lyncha Your short duration power places you in the upper categories for those efforts. You can try selecting U23 / 3 months and will find it a bit more of a “challenge” in that category.

For the Xert population maybe, but that may actually be too small to make a dent in the total. No offence, it’s just that I occasionally do particpate in a TT or climbing gran fondo, just not real races and I’m not that bad, but probably not in the top range either

On the contrary. If you’re comparing yourself to others that compete in TTs or climbing grand fondos, then that would be a small and unrealistic population to compare against.

Yeah, but this spider web is about me against the Xert population, not the world wide cycling population, right? Surely there would or could be a - significant - difference if I compare myself to that larger population?

That’s correct but not all Xert users compete in TTs and grand fondos either. You’re being compared to a population of cyclists that use power, either on their bike or on a trainer.

I had s similar experience in the summer then realised my power meter had spiked in 3 rides to 2000 Watts. This was obviously incorrect and I flagged the rides which brought my peak power back down to what I was expecting and my sprinter percentage to much lower unfortunately!

Seems like Xert has no data for under 23 for example. Maybe Xert is only used by older people who can afford the gadgets? So may I suggest Xert come up with some data other than its user base to compare our fitness with? The data is currently rather unbelievable.

Lol I am 60 years old and apparengly better than 100 % of 23 year olds! Xert is awesome for a false self esteem - Alas those youngsters usually drop me on the hills!

Not sure where you base that conclusion on. Probably your ranking spider web? I can’t see how many < 23 year olds there are, but Xert does hold data to compare them with.

The (percentile) graphs shows data based on your profile, I think.

I.e. for me that is my 8 minute power (in W/kg). If my current 8 minute power equals my all time best effort for that duration, the left percentile graph will show 100%. I doubt very much that you score 100% against 90% of the population, which is shown in the right graph… 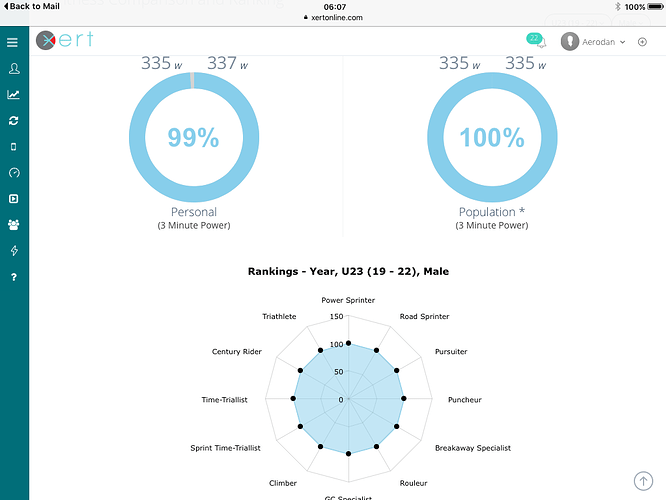 The problem seems to be when I select 1 year or forever. The spider becomes unbelievable. Short term it looks more realistic. I am happy that my power curve is very accurate. It is very hard to get a bteakthrough but I do get some. I am a heavier rider at 90 kg and wins a few club race sprints if the race does not have too much climbing! I can do 1400 watt for a few seconds when fresh, but in a race that is not the case. Often MPA is down to 600 comes sprint time😅

That looks like a pursuiter profile, so based on your 3 min power. That’s not a climber profile. Still, you might want to check your numbers - if I chose that profile, my 3 minute power is 388 Watts, 50% against U23…

I have given up on long term data and only use current year. Too much faulty data, coming from various PM or trainers over time. I now have Assioma’s and a Neo - they match within a couple of Watts and the Assioma’s hardly ever show erroneous spikes, if any. One so far, in the course of a year…

Thanks Robert,
I am trying to understand how to best use the data. Over time the shorter term data should become better and better. Still, I think somebody at Xert could come up with a filter to make sure the data we are comparing with is valid.
Happy riding!

Agreed, but although I do not know the Xert population, I do know that it’s ever growing and support is doing awesome work, helping people to understand their data. And the errors it so often contains, which is the cause of perhaps half of the ‘problems’ people have.

Plus, many people do not really do (max) efforts the way they are supposed to do them, or they do not know how to handle their settings. Xert is a concept that needs you to let go of (most of) the old adagios, in order to fully work to your best advantage.

This fitness flattery is not unique to Xert: my Garmin tells me I have a “superior” VO2 max and at fitness age of 20, whereas in reality I am 55 and distinctly average at best!