My signature (specifically the PP) as shown by Xert has been consistently incorrect. The PP power as shown in my sig is over 150w lower than what I have actually achieved in Xert workouts. So, a week ago I attempted to manually create a signature by inputting three best powers on the Calculator page. I entered three recent best power/times, and then saved the signature. It was successful. All three best power/times were now on the new curve, and my signature indicated the correct PP, the one I had recently achieved. But then, after the very next work out, the signature goes back to what it had been, with the PP over 150w lower than what I have achieved in the past. The other two points that I entered were also no longer on the brand new curve. A few days later I attempted the manual process again, with the exact same result.

So….That’s why I’m asking these questions here. Why does Xert refuse to include in my sig my actual PP as achieved in Xert workouts? Second question, why does my manual input of three best power/time points not “stick?” I have found Xert frustrating enough in terms of the interface, the workflow, and the disorganization of the support articles, but I have come to accept these idiosyncracies. But if can’t trust the Xert signature, that’s a dealbreaker. I want to have Xert work for me, as I am attracted to the selling point that FTP tests are no longer necessary, and I do like the instant positive feedback of breakthroughs, but I do have to feel confident that the estimated TP is accurate.

Just to answer the question as best as I know how:

There are to my knowledge 3 separate forces that can and will change your PP value:

Any of those what you were looking for?

Thanks for the reply. It’s interesting stuff and surely good to know…But let me reframe the question a little differently. What good is the PP figure in my signature? A Gold Breakthrough is presumably better than a Silver breakthrough, but if the PP figure in my signature is 150w lower than what I can actually DO every day of the week, what value does the number have in the “fitness” signature? If the number goes up 20w, so what? Now it’s only 130w too low. The HIE I get. It goes up, and now presumably my “battery” is bigger. Same with TP. It goes up in a breakthrough…Yah! I’m more fit. But PP? It’s like some imaginary number.

PP is defined as 5-second max power and is important for sprints and very short duration efforts, so if that’s important to you, you want it to go up and will be happy when it does.

If more endurance focused, having it ball-park correct is all that’s required for other signature parameters to be correct. See @ManofSteele’s response here

As it’s defined as 5-sec power, you shouldn’t be able to put out more than PP for 5 seconds or more - if you do, it’s a BT and your signature is re-set. Maybe you exceeded it for less than 5 seconds?

There has to be some physiological limit on how much power you can produce, no? The traditional CP model completely ignores this fact. And the 3-parameter unfortunately isn’t really an improvement, despite having a Pmax value.

I thought PP was 1 sec max power but the Xert system does not evaluate peaks shorter than 5 sec because they are often erroneous data spikes. So Xert would look for some >5sec sprint and take or conclude the max 1sec power from that to determine PP.

Am basing it on the definitions under key terms here…

Beginner's Guide: Getting Started With Xert

Contents You can skip ahead to any of the sections of this guide by clicking on the underlined bookmarks below. Some basics you should know What Xert Is, And What It Does What Makes Xert Different Key Terms Setup What You Need to Xert ...

OK, thanks! Then where have I seen the 1 sec max power?

Well, you are both right.

The article doesn’t fully hash things out.
I PMed Scott and the answer is…

So you want to throw down a 5-7 sec all out sprint when fatigued with MPA drawn down and if a BT is detected the signature calc takes over to estimate PP while fresh.
In any case it’s a mathematical construct and I don’t worry about it being my actual max power which physically varies from moment to moment and day to day. Or on some days does not exist.

Ball park is good enough for me.

Ok but practically you need to exceed PP for 5 seconds when fresh… I just created a dummy workout and MPA only drops 13w in 5 seconds riding at PP, which is less than the 50w tolerance and the accuracy of the power meter…

In practice, you’ll find that there’s a bit of a lag between when power is applied and when MPA decreases.

I was referring to BT workouts when you draw down MPA and right before you collapse you jump up and sprint for at least 5-7 secs.
If a BT is detected at that junction your signature will update and if appropriate your PP will change even though you didn’t reach PP during that sprint. However, your performance during that 5-7 secs indicates predicted PP for 1 sec when fresh is X watts.

Here’s an example where my PP rose 30 pts, not from the failed blip to hit PP at the end but from the BT event where indicated which is where the actual 5-7 sec sprint took place. 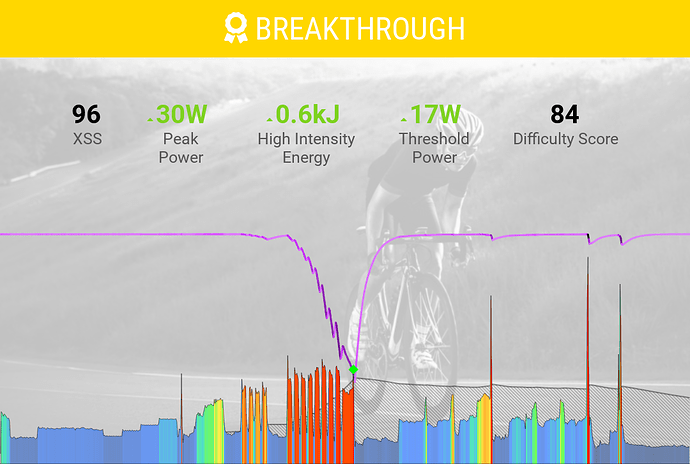