At the moment XERT is sort of polarised (80:20) but only if you say that anything below threshold is endurance rather than workouts below LT1. So you can be recommended tempo/sweetspot intervals and it will be recorded as an endurance ride as it targets your aerobic endurance. However, in Seiler’s 80:20 those workouts would be in the middle yellow zone and not considered as zone 1 and you would become more pyramidal in your training approach. XERT recommends theses as it works on a 20 weeks to peak fitness (I think I have that right) so the current approach is sensible. But what if you were looking at long-term fitness and not just 20 weeks ahead, something that Seiler’s approach would suit better. Is there anything in the pipeline that would allow you to choose either the current situation i or a more rigid Seiler approach with workouts 80% of the time below LT1 and 20% above LT2 that would be reflected in the recommended daily workout? I also don’t use a 7-day microcycle but a 10-day one to allow for more recovery, it would be good if you could programme that in to your settings and the recommended workouts reflected that. I fully understand that this could be a lot more work so is prohibitive.

Think you just need to manage that yourself… and even if there was a setting, there are next to no workouts that are completely below LTP, so XATA wouldn’t add much with the current library… I kind of understand that, as I’m not sure you need intervals or structure for your long easy rides… and you’d probably use HR as much if not more than power for those.

As an aside, believe LTP is 10% or so above the easy ‘all day’ intensity Seiler intends, though it may depend on your signature. Also think Seiler also advocates that ratio (broadly) all the time, rather than repeating base, build, peak cycles, which is also counter the XATA approach.

Worth being careful how 80:20 is interpreted as there are conflicting opinions out there… My understanding is that it’s 20% of workout hours in high intensity training sessions (including recovery between hard efforts) rather 20% of time above threshold… so it’s maybe more like 90:10 from a time in zone perspective. Even that is a lot of time above threshold for someone riding 10 hours a week, if you ask me…

Thanks for your reply Wesley. That is what I thought. Long, steady rides I do with power, but use HR as a ceiling so even if I have to go up a 1:4 section I try and keep HR below VT1 even if power rises above LT1. I understand polarised to be number of sessions rather than time so yes you are right the ratio in time might be 90:10 or even 95:5. I tend to do 2 hard rides a week with 2-3 easy days in between depending on whether I do 2-a-days (13 mile each way commutes). I’m tending to use XERT for its TP and LTP calculations rather than as a planning tool.

I’m finding LTP to be about 10% above VT1. I’m trying to to do my endurance rides at +0/-10 beats of VT1hr. To do this requires me to create my own workouts and then set the filter to only my own library. If I do endurance workouts from the XATA library they leave me struggling to back up the following day.

I guess I’m the same, but as I tend to set my HR limit roughly 8 beats below my VT1 then I should be in the right ball park. I definitely have no problems riding 25 miles a day with a 1000’ elevation with every third day something intense or longer

I understood as a basic guideline that to keep improving fitness, you need to keep improving load. And to stay able to drive load up, the most important rule is to not tire yourself in a way so you have to pause to train.
From that I am deriving for myself that rather than looking at a specific HR or applying +/-10 watts more or less, I am just trying to do the max which let myself stay in the yellow (and not red).
If the result is then polarized or whatever else doesn’t bother me much, as long as I manage to increase my fitness.

I was going to raise a post re Seiler LT1/Z1 and the Xert LTP relationship. However being a good community member I did a search first and came up with this thread.
Blog https://baronbiosys.com/sweet-spot-threshold-and-polarized-training-by-the-numbers/ states , From a modeling perspective, LTP corresponds to the point at which Endurance Energy is not being depleted and thus does in principle align with LT1

Two posters on this thread have suggested that LT1/VT1/Seiler Z1 limit is actually about 10% less than LTP. My findings are exactly the same LTP 215 (TP 262) but 75% of FTP/TP is 195 so a good 20 watts difference.
Converesely for HR limits using 75% of MHR for the top of Seiler Z1 I could comfortable stay at LTP or thereabouts. for few hours.

Starting out on the polarised training approach I thought that a lot of miles at LTP would be the right thing and Xert could dynamically track that value. However it now appears that the blog entry is perhaps misleading.

Hi, I came back to Xert after few weeks and my “Xert” TP decrease. In order to fix “Xert” TP, i removed previous activities and run an “Classic 20 Minute FTP Test - Xert” without heart rate monitor (mine was out of service). During 20 minutes, I maintain about 240W. Using projection, my TP is near to 240*.95=228W and Xert compute a LTP of 213W, This LTP, according to my understanding (LTP = power available for hours, based on http://baronbiosys.com/glossary/lower-threshold-power/), seem’s to…

Keep in mind that, if wanting to follow a polarized approach, that LTP would be considered the ceiling of your low intensity training, rather than the target, per se.

There has been a lot of excitement/chatter lately about a new non-invasive estimation of LT1 (aerobic threshold - the upper limit of Seiler Zone 1) through the use of high-quality HRV data during exercise. Check out this blog post from Marco Altini here: https://medium.com/@altini_marco/hrv-based-aerobic-threshold-estimation-for-endurance-athletes-a-practical-guide-8c1d744beae8

I’ve heard back from a couple of Xert users who have tried testing their LT1 with the DFA alpha 1 method and found that it was nearly identical to Xert’s LTP. Others found that LTP was slightly higher, but generally close enough to use as a non-invasive marker. Important to keep in mind that both these methods are non-invasive - you could always go pay a lab a couple hundred bucks to get an exact value

My n=1 is that I’ve had really mixed results (some days I need to be less than 50% TP to have DFA a1 above 0.75 and other days I can ride at 75% TP or even above for hours and stay above 0.75), so am sticking to other approaches for determining aerobic threshold. That’s despite using the recommended HRM and testing protocols (either steady, or 6 minutes ramps), and generally doing those tests when I feel fresh.

By other approaches I mean applying the talk test, and also checking HR drift. Haven’t tried a long ride at 100% LTP but can ride at 90% LTP for two to three hours with zero drift, so expect aerobic threshold is at least that high. As Scott says, that’s a ceiling and I tend to do my easy days at 75% to 80% of LTP. That’s about 55 to 60% of HRR (coincidentally in line with what Dr Cheung mentioned he’s been doing in the latest Xert podcast) or under 70% of max HR.

Starting out on the polarised training approach I thought that a lot of miles at LTP would be the right thing and Xert could dynamically track that value.

What does dynamically track refer to?
Something different than the Weekly Stats under the Planner tab?

I have been following Xert recommendations now for 100+ days of indoor riding and have accumulated plenty of hours below LTP.
See this post for my tabulated values across all zones (below Tempo = <LTP) –
Sweet spot question - Support - Xert Community Forum (xertonline.com)

I also consider LTP as a ceiling, not a target especially riding outdoors which I hope to be doing soon.

I don’t know if this has been discussed before, but would it be possible to add the capability for the EBC app to record the R-R intervals from HR straps that support it?
As of today I know that only Garmin devices can do that (once you hack some of the settings on device) and none the oo devices do it (Karoo, Wahoo, etc).

Enabling DFA A1 analysis in Xert would be the next step, but I’d be happy to collect the fit files for analysis without the R-R stripped out.

Funny you ask. Xert Mobile always did R-R calcs but there were so many errors and user complaints with various HRMs that we decided to just go back to using regular HR data.

Using R-R data in a broad scale application is not quite ready for prime time. We have been sitting on a comprehensive HR data model that we’d originally thought we’d bring to market but the data quality from HRMs is the problem.

Once we start to do HRV in the app directly, we’ll need to find a way to filter out most HRMs in order for the numbers to make sense. DFAa1 is something we are looking at but there are still lots of questions.

I watch Seiler’s videos every time they appear on my feed, and recently I realized that I was incorrectly evaluating my Z1 max HR: instead of taking x% (70-75% I think ?) of my HRmax, he reminded me that I should use (x * (HRmax - HRrest) / 100) + HRrest, instead !
And that gives me numbers that match more closely to the HR I have when I follow Xert’s recommended workouts based on LTP. Even though I don’t know my HRrest

For ex., I was previously focusing on toooo easy workouts so that I had to keep my HR below 130-135bpm. Now I can do workouts with HR slightly above 150bpm without having to worry about those “high” numbers.

I haven’t watched or listened to many or the more recent podcasts but in the older ones when he generally talked about percentages of HRpeak (or max) rather than HRreserve. There was one exception to this on the Flo Cycling podcast.

I’d need to have a look back, but I believe that the typical range of HRreserve is 60-65% - making this align fairly well with percentage of VO2peak.

Higher values were typically for % HRpeak. 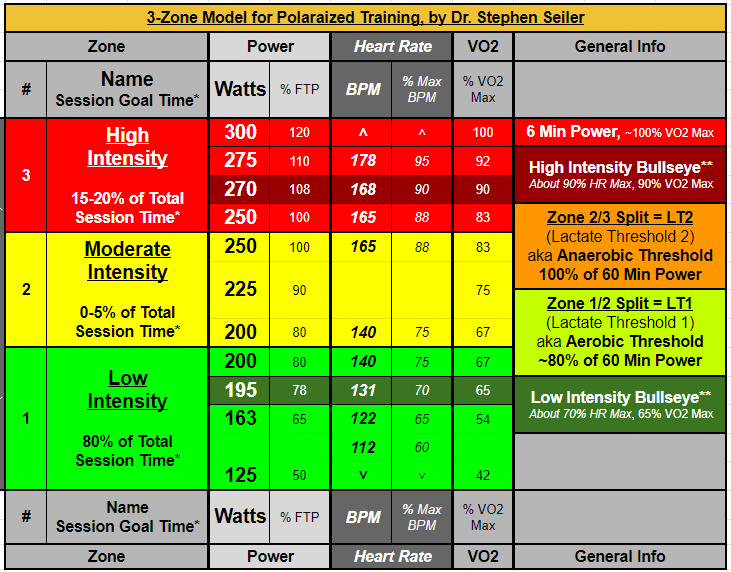 (Image stolen from Chad McNeese over on the TrainerRoad forum)

Hi Armando, all I’m asking is that the R-R data is included in the fit file exported by the EBC app. Right now only people with Garmin devices (after doing a little hacking) can get R-R data recorded in the fit file. I was not able to find any trace of it in files captured with Wahoo devices and/or Karoo. I think adding that simple capability would enable people who want to play with the data to do so.
There are ways to minimize artifacts, and in particular, using the right HR strap can also help.

It’s not currently on our immediate high-priority hitlist for the app but is something we are keeping a close eye on for future updates.