I came back to Xert after few weeks and my “Xert” TP decrease.
In order to fix “Xert” TP, i removed previous activities and run an “Classic 20 Minute FTP Test - Xert” without heart rate monitor (mine was out of service). During 20 minutes, I maintain about 240W.
Using projection, my TP is near to 240*.95=228W and Xert compute a LTP of 213W,
This LTP, according to my understanding (LTP = power available for hours, based on http://baronbiosys.com/glossary/lower-threshold-power/), seem’s too high because I can’t do “SMART - Lucy in the Sky with Diamonds - 120” with this LTP.
Few weeks ago, according to Xert, my FTP was ~215W and LTP ~132W (endurance training was like Lucy was sustainable

Do I correctly understand LTP meaning ?
How Xert compute LTP ?
Why I can’t set LTP value from “Account Settings / profile”

You had some wonky parameters to your fitness signature (for example, your HIE and Peak Power were far too low). I temporarily increased those to some plausible values, but you may want to confirm your Peak power is valid by doing a few all-out 10-15s sprints, as well as confirming your HIE with some harder efforts between 1 min and 2 min in duration.

LTP is derived from your other 3 fitness signature parameters…it’s not something that you can directly manipulate yourself. This is why it’s not possible to directly change it under account settings.

I’ll try some sprints in order to estimate my Peak power.
I can easily figure how to find this value but I don’t understand how can I find HIE value from harder efforts.

In general, HIE trends with your Peak Power (i.e. if you have a large PP, it’s expected that you’ll generally have a large HIE). The typical ranges for HIE given a certain Peak Power can be found in the following chart, which is from our support article that I’ve linked below: 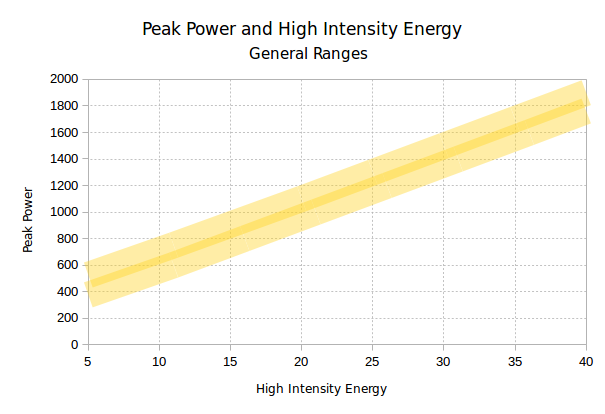 Note that these are general ranges, so don’t be surprised if your HIE isn’t dead centered on the value expected from your Peak Power.

Thanks a lot for your help.

I’ll do some sprints this evening to evaluate my current Peak power.

I have tested differents values for Peak power and HIE. Only HIE impact LTP value.
I’m surprised that highter HIE value compute a lower LTP value.
My first “impression” (sorry, i’m novice, no book reading… :)) is the contrary : less I have “energy”, less my LTP should be.

I have read the article but too quickly to understand it. I’ll read again !

Based on my feelings, i can substain ~140-160W for hours. In order to get LTP closed to these values. HIE should be set to 28 or above.

LTP isn’t necessarily what you can ride at for hours… it’s actually a little more complicated than that. Essentially it’s what we expect your Threshold Power decays down to after hours and hours and hours of riding. IOW, riding at LTP after several hours will feel similar to riding at threshold when you’re fresh.

HIE represents your ability to generate power above threshold (anaerobically through the use of carbohydrates). As your body becomes more adapted to producing power anaerobically, you become less efficient aerobically - thus LTP generally decreases as HIE increases (given a constant Threshold Power). This also explains why professional sprinters aren’t winning Grand Tours (they lack the aerobic engines - think LTP - of the GC riders), and why GC Contenders aren’t able to hang with the sprinters in pack finishes (they lack the anaerobic capacity - think PP/HIE - of the power sprinters).

I had to bump this up as this comment is pure gold for me. I always thought LTP is LT1 and therefore too high estimated in my signature.

Feedback from a number of customers and sport scientists have suggested that LTP tracks your LT1 very closely. One thing you can do is to conduct a lactate test and confirm that LTP and LT1 do in fact coincide for you. Then as you train, continue to track LTP and use it to help you better understand your current fitness in between lactate tests.

Thanks for the link!

However this is not the case with me … It’s exactly how Scott describes it. After 5-7 hours at about LT1 (to give a clearer picture of the relations here my absolute numbers: 185) my LTP (214) feels like FTP (265)

I guess they learnt something since 2017

Edit: Quick google search brought this up:
“Personally, I can tell you it is not closely aligned with LT1 which they imply it might be. LTP for me is around 25% higher than LT1 (based on INSCYD test).”

“They” obviously did imply that, but don’t do this anymore. I did spend quite some time digging into Xert’s terminology but was under the impression ltp equals more or less lt1, which is (supposedly?) not the case for many athletes. Maybe you need to communicate this more obvious @ManofSteele and @xertedbrain to save athletes from training to hard in endurance workouts (#Idon’tAlwaysDoEnduranceButWhenIDoICheckBreathing)

Edit 2: Since I’m on it … Don’t get me wrong, I LOVE xert, but you could also get rid of the carb/fat estimation or at least mark it as beta/alpha as I bet this is wrong for at least 80% of the users also (estimates fat too high and carbs too low. Anyone who doubts that, try a 4hour+ endurance/tempo ride with carb utilization estimated by xert :-))