No notification from a processed activity

Maybe a one time glitch, although I think it happened twice, but I no longer get a notification when a workout, logged on Garmin Connect’ is processed. It DOES process, so no problem there… 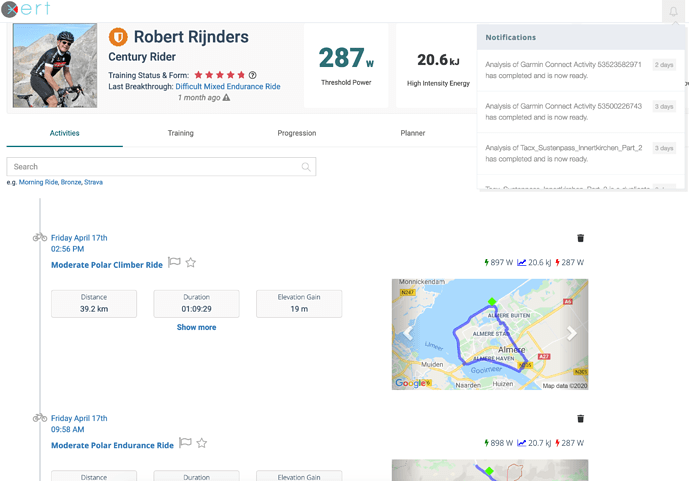 I did two workouts yesterday, but the last notification is about Thursday.

Can I ask you a quick question…

Where are these sessions?

They don’t appear in my list of workouts when I search for them.

Xert auto-creates them - it’s an activity from Garmin Connect and Xert gives it a title, corresponding to the type of workout.

No notification today either, but it did give me this

I renewed on Weds I think and have had no notifications for efforts sonce then. One or more a day
And have you upped your training game Robert?

I’m still racking up miles (and hours) though, for lack of having something else to do. Plus, unlike normal months/years, when I only have a shot at finishing the Strava Climbing Challenge when I do have a trip, I could now complete that virtually. And, as I’m a sucker for badges, I finished it last week

Makes a good training for September, since I have a Neo. I know many loath the indoor riders, because you do not face the elements (try IF .95 for 75 minutes indoor, but anyway), not watching out for tire wide cracks in the pavement, not having to dodge motor cycles and cars and even not having to bounce of them, as I have done a couple of times already. But, Strava allowed it for once, so…

Still no notifications, but the activity processes, so it’s not a priority one bug.