Just got my power meter, and I’m starting to prepare my setup for outdoors rides with Xert.

I have an edge 130, but I’m trying to move away from Garmin.

So, I have a old Samsung S7 that I’m trying to convert to bike computer. I’m planning to use a power pack too.

I need turn-by-turn navigation as I don’t know the roads that well, that’s why Xert EBC as a standalone doesn’t do the trick for me (change apps mid ride is a no-no to me).

So I came up with this bodge 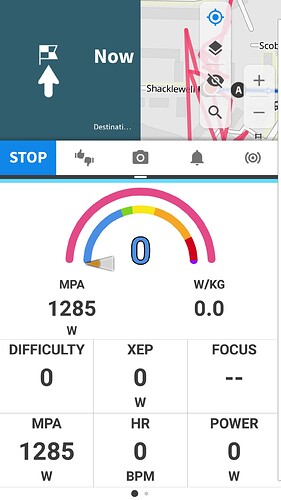 I split the screen in two. The top app is Komoot.

I do all my rides planning in komoot so it’s one step less.

I know that some of you went with the karoo option, but I’m not incline to spend much more money and for what I read there is a lack of Xert fields in the app.
Keen to hear others experiences and advices.

Nice share. I’m also using an s7 as my computer, and app switching (xert + hrvlog app) has been bugging me.

Oh, and the battery life on my s7 is woeful too (~2h), and I also couldn’t justify the cost of a karoo when I had a free/unused s7 lying around.

I’m also using Split Screen Laucher (Early Access) to create a shortcut for a split screen with Komoot and Xert.

I’ve done similar with RideWithGPS and the King Kong Mini. I would run both on the phone and use the bottom right square double-tap to switch between them. Spit screen is also ok too but found that I was either navigating a ride (use RWGPS predominantly) or training (use Xert predominantly) in my rides so full screen worked better.