My peak power fluctuates alot in my progression chart but I hard ever try to sprint to that value in my training. If I know roughly what that value is and that it doesn’t fluctuate that much would keeping it constant make my HIE and TP values more accurate? PP and HIE seem to fluctuate together quite a bit with a seemingly random pattern that I don’t think correlates with changes in fitness day to day

I don’t think there is, but define ‘a lot’. Mine normally fluctuates within 5 Watts, which I think will not influence HIE and TP at all. I did have a more significant, gradual decline of 15 Watts during October, as I’m not doing any max effort sprints indoors, but my HIE and TP have been steady. All parameters are steady - within a few clicks - throughout November…

The former is entirely possible, depending on the starting value, the latter is unusual, I think. My PP went from ~1100 to a way more comfortable ~980. Shoot support an email to check your options, or @xertedbrain may shed a light on this here.

It’s probably not anything to worry about in terms of accuracy. On thing you can try is going back to your most recent breakthrough, click on Advanced MPA and play around with your peak power. If your efforts during that breakthrough were mostly sustained intensity rather than sharp sprints, you’ll see that peak power won’t affect your predicted MPA during that effort very much. In this sense, the Xert’s model of you will be relatively accurate for the types of efforts you do even if the peak power parameter is inaccurate.

Are you using optimal decay? Using optimal, I often lose 25-40 watts (2-3%) of PP in 4-5 days due to decay. Keep in mind, optimal decay tries to motivate you to aim for frequent breakthroughs. Since a lot my training involves peak power type efforts, I don’t mind this motivation to smash out a few hard sprints in a row every week or two to keep it updated.

I think changing the Recovery Load Constant to something really high like 9999 it would do it. 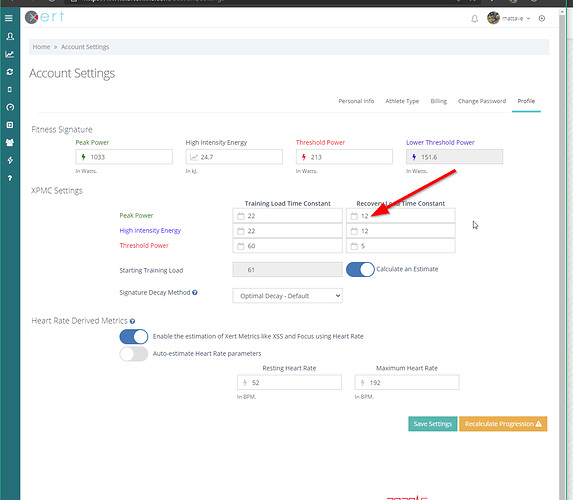 This would make it so that the peak power you currently have would never decay. It would still go up with a breakthrough and through training.

That’s not what that constant does. It is related to the rate that peak XSS accumulates and decays in the XPMC.

For a better understanding of what the decay constants do it’s worth reading this post:

This post was originally on the Facebook page but I thought I’d post it here now that we have a nice new forum. It also ties in nicely with the latest podcast episode. During a recent discussion on the TrainerRoad forum regarding TrainingPeaks’ new adaptive training plans, an interesting comment brought up the issue of TSS and in particular the Form metric of the PMC not taking into account the difference between a 200 TSS endurance ride and a 70 TSS cross race: The race can leave you feeling d…