is this sort of very intense 2-week vO2 block just a bad idea? It’s certainly not very Xert like… stacking back-to-back vO2 just doesn’t seem to be advisable… when self prescribing this sort of thing, do i need to have a certain amount of training load and recovery load built up before attempting it? 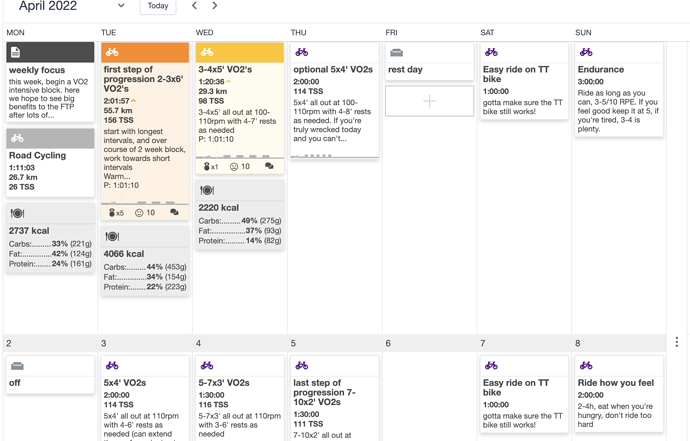 but in this sort of VO2 block, I don’t think the benefits are really lost even if you can’t deliver power that is close to the 2’-6’ curve MMP right?

is this sort of very intense 2-week vO2 block just a bad idea?

Hard to say without knowing the purpose and training background but on the face of it I’d say it doesn’t fit with normal training approaches e.g. why schedule them back to back instead of with recovery days in between… also from your activity it looks like you’re trying to go close to failure on every rep(?!) given the large MPA drawdown in the first, and your concern re smaller MPA drawdown in later reps… it just sounds too tough… why not ‘just’ bring MPA down 10% or so each rep (10% is made up - maybe base on difficulty score you think you can handle instead?)… or try the ‘Closer’ series of workouts with hard starts…

Of course, if you’ve a high TL and have stagnated with more conventional approaches to VO2 blocks, then you can try a tough overload approach… maybe look at front load periodisation (or periodization for the Americans) instead? There are some posts on this forum about experiences with that (generally only recommended if you have experience and have tried conventional blocks first though)… and I think @ManofSteele wrote an article about it once…

I have done front-loaded periodization before and it actually helped me reach my best-ever numbers. However, it was really, really taxing on me. Between that and grad school, I burned out a bit after two cycles of it. Definitely wouldn’t try anything crazy like that with less than 3 whole stars.

It was very taxing on me, but it pushed me from ~3.25 stars and 280 W TP all the way up to about 4 stars and 305 W TP in a relatively short period of time. Only 4 weeks of training for 7% increase in TP in an already well-trained state is no joke!

interesting @ManofSteele from what I can tell, the 2 week plan I outlined above could fit in a front-loaded periodization if i follow the 2 weeks with just endurance stuff… though yeah 30/15’s are a different breed of vO2… both perhaps target similar physical adaptations though the execution of the longer all-out efforts helps train up the neurological aspect of being hard as nails and delivering race-winning puncheur type moves like i’ve seen from Julian Alaphilippe.

without knowing the purpose and training background

now that i’ve had more time to think on what i am doing and reflect on my training background… lol i have more thoughts
I did this exact training block in 2020 with a coach I am repeating it now to see if it gives the same results with a different type of base season… I am just experimenting… lol. I didn’t want to include this in the OP because i didn’t want to bias anyone’s opinion.

back then in 2020 base, I did have a higher TL (78 at the beginning vs 55 at the beginning this time), I did a lot more TP and sweet spot training back then. this past base, I did literally 0 of those type of 3x20’ TP rides… I think I’ve only a couple SST rides and one tempo ride… and then sprints and races.

now that I’ve completed the first week with pretty satisfactory execution… (I did 6 hour endurance ride yesterday instead of 3 which surprised me, i’m actually a little tougher and don’t mind sitting in the saddle longer now compared to 2020)
Maybe i don’t even need to do week 2 due to the lower TL? I guess there’s some chance that i’m likely to have a similar test result if i rest/test now compared to if i were to complete the 2nd week as planned and then rest/test?

also from your activity it looks like you’re trying to go close to failure on every rep(?!) given the large MPA drawdown in the first, and your concern re smaller MPA drawdown in later reps

Thanks for the tips… I think yeah it is possible i did overcook that one interval… but also i believe i cut myself short on rest between those intervals… looking back at old notes, there were no rules saying i absolutely had to rest no more than 5’ between… if i had given myself 2 more minutes i bet i would have been able to come much closer to repeating them properly.

Not sure you get the full adaptation in a week - even the front load approach was four weeks (and note it still had one high intensity session a week after the first week). So maybe continue with two this week, then one a week after that, for four weeks?

Re intensity, would use MPA drawdown as a guide rather than objective. Same with power in general. Getting the HR up (well above threshold HR but not necessarily right near max though) and keeping it there, plus a super high RPE are probably more important

but in this sort of VO2 block, I don’t think the benefits are really lost even if you can’t deliver power that is close to the 2’-6’ curve MMP right?

The literature suggests that the most important aspect of VO2 work is being above 90% of VO2max (you can use 90% of HRmax as a surrogate). What makes this interesting is that 30/15’s or 30/30’s will likely be ‘easier’ than a lower-intensity constant effort - Billat is the researcher who showed us that. For example, I’ve been able to do 30 straight minutes of 30/30 efforts, averaging 89% of my HRmax during that time.

Another interesting way to do VO2 intervals is using the ‘fast start’ method. The idea is to start fast & bring MPA down a bit, then finish the interval at/slightly above threshold. Depending on how far MPA is drained at the start of the interval, it’s possible to maintain a high HR throughout the interval:

I definitely believe in this… driving the hr quickly up to the level where the benefial stimulus begins is great. also to me it mimics the natural outdoor ride rpe based “all out” sustained effort. Which at least seems better all around to me.

Remember that we had designed and were prescribing XSSR intervals before fast-start intervals became a thing. We never called them “VO2” but just.a better way of applying strain. Some of called these akin to “drop sets” in the gym.

In Xert, there’s no VO2. There’s no mitochondria development. We don’t have neuromuscular endurance intervals. We simply look at how power is produced and how we can apply strain towards this to improve it. The underlying mechanisms don’t really matter, do they? You just get stronger when you apply more and more strain, progressively and in the right doses towards those power producing systems. So simple and it works. Quantifiably and predictably, unlike anything you get from those that purvey the older methods.

… post block i rested two days then did a tt in an extreme sudden heatwave. Then two more days rest very very small gold breakthrough in a five minute test basically resetting me to the numbers before a series of fake-throughs that i got during the block. I got No change to TP… I’m pretty sure i over reached just a little bit too much (because i had to do other things like dig twelve holes in my back yard for trees which destroyed my recovery) and need to back it off for this week before trying some kind of breakthrough test that might express my TP a little bit more. 270w i believe should be kinda low. 280-285 seems closer to the mark based on what I felt during my tt warmup and pre tt primers… but perhaps the lost recovery and over reach means i didn’t really gain anything with this block…

Did any other parameters change though e.g. HIE or peak power, to get the full picture? Maybe with a bit more rest you’ll show your true fitness too…

nothing that could be considered outside of general power meter error.

Yes I am very much due to take a very gentle recovery week… my back was getting fatigued and had twinges of pain which is very unusual for me… and during the week after the block i may 9th to may 13th, i shouldn’t have even tried to do anything more than a couple recovery rides… not force myself to go to the C priority Time trial race… I got maybe a dozen other signs of mild overtraining…
lol during the block there were signs that i should have just cut the block short but i ignored them… I had enough fatigue on the may 3rd 5x4’ interval set that i just called it quits halfway through the first interval for example… though i did come back much stronger the next two days may 4th and 5th…

it took a long while, but i finally recovered enough to truly express my fitness today! so maybe that vO2 work did pay some dividends?
gold B/T
+30w to FTP
+4kJ to HIE
+19w to PP 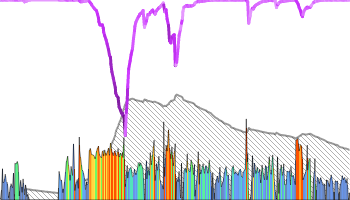 Those are some nice improvements! Great work - would you do it again?

Haha well it’s the second time I’ve done it… first time i had a lot more volume and it was the coach’s prescription. Now I’m the coach.
I’m getting an idea that you need to scale the intensity to match the volume… i had less volume this time compared to last time so should lower the length of the block to match…
Like I’ve heard that this coach will even go up to three weeks with people that have much higher TL