I did a SYSTM ramp test (Half Monty, which is a ramp test followed by a heart rate restricted 20 minute effort). SYSTM gave me a FTP of 269, Garmin 253 (75% of best 1 minute effort), Xert gave me a breakthrough that kept my FTP at 217. I understand that ramp tests are really testing MAP and FTP is extrapolated from that. After a year of using/checking Xert, my Xert FTP is normally lower than my ramp test results, but this time it seems way off. Just looking for suggestions. Thanks!

@bfrostie my guess would be that your MPa in Xert is impacting your TP in Xert. This doesn’t mean that Xert isn’t correct though, as they don’t use the standard % of max 1 minute power, but rather your unique fitness signature. You could try manually bringing it down your MPa a little bit, say 10%, and then doing a different type of Breakthrough like 40-20s at somewhere between 3MMP and 5MMP until failure. This would likely reset your fitness signature.

For what it is worth, I had an HIE in the high twenties when riding outside, and upon putting my bike on the trainer, in order to get to get my TP to match the FTP in another system (calculated via a ramp test), I had to bring it down 17. I haven’t done another type of BT, but I think it would be necessary to get my signature dialed again.

Not sure if this would be considered sound advice by @ManofSteele, but it is what I would try.

@CBrendan Is correct in saying that Xert does not use any % of your mean maximal power (MMP) to determine your threshold. So Xert doesnt use 95% of 20 min power, 90% of 8 min power, 75% of max 1 min power from ramp test, etc. And there’s a good reason for this… (it’s a bit of an abstract concept, but stick with me)… there are many different combinations of fitness signatures that can result in failure at a particular moment during a ramp test, or IOW, athletes with various amounts of aerobic and anaerobic power output might have the same 20 min power, 8 min power, of max 1 min power from a ramp test. And other systems don’t even try to estimate any sort of anaerobic input (maybe Sufferfest is the exception, since they at least try to use 4DP).

Rather than using a standardized test, Xert can identify moments where you’re near failure (where your power is near your maximal power available or MPA) and use that information to determine your unique fitness signature (Threshold Power, High Intensity Energy, and Peak Power). Many times, these efforts occur naturally in your ride data, assuming you have hard all-out efforts in your rides occasionally. As Brendan mentioned, you can use micro-intervals to help reset your fitness signature, but that isn’t the only way. In reality, any effort that brings MPA down towards your threshold will help correctly identify your threshold. Hope this helps a bit! Cheers!

Thanks @CBrendan and @ManofSteele for the replies. I fully understand the differences between Xert and most other training programs. I have found over the last year that Xert is normally close to (approximately 10-20W below) my ramp test and 20-40 minute sustained effort FTP tests. This one confused me because it was so much lower. I wonder if the heart rate restricted effort, which purposefully keeps you below your threshold heart rate for 20 minutes after the ramp test, made the system think I gave up on the effort early.

Oh well, not a big deal to me, I will keep on training!

An HIE value of 33.4 is very high. If it is correct, then any ramp test will massively overestimate your FTP. Ramp tests assume that everybody has an average HIE.

I suspect it’s linked to doing the ramp test in erg mode. Xert can have trouble getting the right balance between HIE and TP due to the ‘unnatural’ failure pattern… I also used to do one of the Xert ramp BT tests in erg, and also ended up with a very high HIE, which Xert support lowered for me.

If you can hold 240w for 20 minutes at that kind of HR relative to max (also the pattern - basically flat with no drift), with some fatigue from the ramp, I actually think that your threshold is at least that, if not higher. I know Xert is a little different in definitions, but I don’t think you would have been drawing down MPA as much as Xert implies (if at all!) in that steady effort, else your HR would have been rising.

I would used advanced MPA to raise TP to at least 240 and lower HIE (but still result in a BT) then save that signature.

Hadn’t thought about enabling HR on @bfrostie’s chart but your analysis makes sense.
What do you think about the cadence pattern during end of the ramp?
I haven’t done a ramp test in ages but looking back at mine they all show an increase in rpm before failure not a decline. Or is that more a function of slow-twitch/fast-twitch?

Tend to agree, think it’s normal to increase cadence with power IRL, but think it’s a symptom of a long erg death spiral? Maybe some muscle fiber differences - no expert there

All interesting input! Thanks everyone! My cadence always drops at the end of a ramp test because I am trying to get every last second out of it before my legs stop spinning.

For fun, below is my first attempt at SYSTM’s Full Frontal fitness test (October 7, three weeks and one day before my ramp test above). That was the most exhausting hour I have ever spent on a bike! 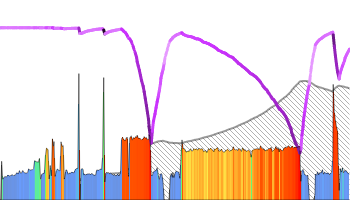 I just started following a SYSTM triathlon season prep plan. I have played around with a lot of training methods and have found, for me, SYSTM seems to work. I love the idea of Xert and have enjoyed using it off and on over the last couple years as triathlons have mostly been canceled. If Xert had something for triathlon I would definitely try it. Yes, I could have two accounts and manual adjust a bunch of stuff and bounce back and forth between accounts, but that is too much effort for something that I feel could be seamless. Oh well!

We’ve made an interesting observation fairly recently, such that HIE * 1000 / (PP - TP) should give you a value near 30. Your value is close to 50. We can make an adjustment, if you’d like. Send me a PM if you want.

Thanks! Not sure how to PM, it is through the forums?

Has a proper Peak Power effort ever been done outdoors?

Not since mid-summer. I had been doing almost all easy riding between July and my knee surgery at the end of August. My Full Frontal (4DP) fitness test above was done in slope mode, so it would be similar to an outdoor ride.

My Full Frontal (4DP) fitness test above was done in slope mode, so it would be similar to an outdoor ride.

I suspect that even if in slope mode, the failure pattern is still rather ‘unnatural’ in that you basically stop abruptly at the end of your 5 or 20 min efforts… rather than trying to hold on and having power start to drop like it would if you were actually failing at that point… don’t know the maths, but can imagine that Xert algorithms assume a higher threshold / lower HIE for ‘slower’ failures / greater ability to maintain power while failing… (and vice versa in case you suddenly ease up)?

Practically, if you will do such efforts in future you should fully go to failure, or if not, you could flag them so they don’t affect your signature… you’ll just need to make sure you do have some ‘real’ breakthroughs from time to time

If you haven’t done a fair dinkum outdoor sprint your PP is probably underestimated. If you can hit a PP of around 1330 watts outdoors then the original HIE would be entirely plausible. What’s most likely is that your PP and HIE are somewhere between the original and the tweaked values.

I definitely cannot! My peak power is somewhere between the 834 from the Full Frontal and 910 from Xert. I’m more of a longer course triathlete, so I really have never trained PP.

If you can do 834 on a trainer, odds on you could smash that value on the road.

I guess it is possible. I have never tried a full sprint (standing) outside.

@bfrostie I know you are pointing out a discrepancy issue when using another testing protocol, but for those who may stumble onto this thread in the future here are some key points –

Consistency is crucial to successful training and that also goes for testing protocols.
Each platform has their preferred testing method which works well for the majority who train on that platform. However, the same test will fail a minority who don’t respond well to that type test or simply fall on either end of the bell curve. Plus test results from one platform don’t necessarily translate to another.

For the most accurate results with Xert you’ll want to test the Xert way.

Once every 3-4 weeks – if your regular ride/workout activities aren’t generating BT events on their own – select a BT workout from the library and ride it in slope mode. You can be “said and done” in as little as 10 minutes worth of HI efforts. You’ll never need to do a RAMP, 20 minute, or 8x2 test ever again.

Of course you can do them if you’d like to but those tests may not provide sufficient data points for Xert’s signature algorithm to work as designed.

Consider your PP value can also rise without actually hitting a higher number on your power meter. For example, some BT workouts include a long interval where you drive MPA down then stand up (right before failure), spin up, and sprint as hard as you can for at least 5 seconds (while fatigued). The measured power will be considerably lower than a sprint effort while fresh but it’s enough for the Xert algorithm to predict PP. If prediction is higher than current value you’ll get a bump in PP. You don’t need to be a sprinter or practice sprinting to accomplish this, but it helps to practice BT workouts to understand how they work and determine which one(s) are your favorite to do.

It is also common for your sprint power indoors (power meter value) to be considerably lower than what you can accomplish outdoors. A jump of 150-200 watts outdoors isn’t unusual.
Everyone has sprint power whether they have reason to use it on occasion or not.

Think what would happen if you found yourself between a grizzly bear and their cub crossing a road. The mother bear may outsprint you but at least you tried.