How is the qualification of a ride determined?

I did these two activities, one day apart and in reverse direction. Apart from the average power being slightly higher, the rides are equal.

So, why are they qualified differently? Because of that power difference? 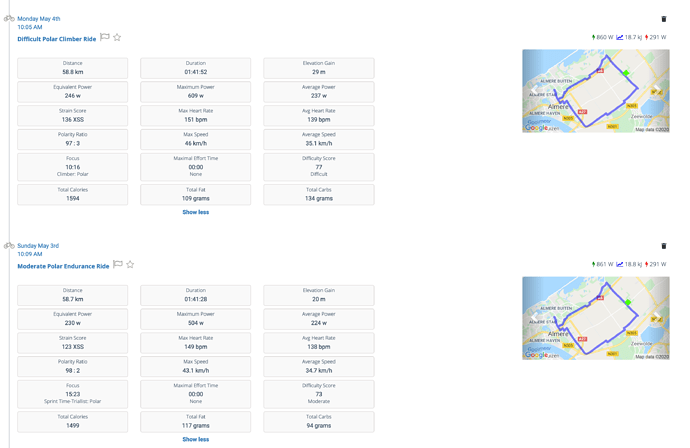 Might be, but for all intense and purposes, these two rides are - and felt - identical. There is hardly any light between the ‘standard’ values measured, like speed, power and HR, and the course is exactly the same. Even the best effort is at nearly the same spot…

Or, the North-South direction of that bridge qualifies as a climb and the South-North does not

As far as whether it’s an ‘Endurance’ ride or a ‘Climber’ ride is concerned, you have to remember that these categories are next to each other on the scale, so a small change in the focus duration, which is based on the proportions of peak, high and low stress during the ride, can move a ride from on to the other.

As it is, the focus of one ride was 15 minutes and the other was 10 minutes, so not that close.

Although the two rides have a near identical average power, the first has a much higher equivalent power (normalised in Coggan language) which means there were more higher intensity efforts leading to more peak and high stress and, therefore, a shorter focus duration. If you open up the activities table view you can add columns that show the Low, High and Peak XSS for each workout and you’ll see the difference between the two. I’d like to see this information on the activity page - it’s there in the workout creator.

Similarly, with difficulty the boundary between ‘Moderate’ and ‘Difficult’ is a score of 75. Your rides are at 77 and 73 which is very similar and not far either side of the boundary.

Thanks for that elaborate explanation Mike. I just didn’t feel much of a difference, but that is obviously not really an indicator, as it is subjective…

If it just takes a few ticks up or down to get another qualification, it makes (more) sense.