Hi all. I’m new to Xert, having come from TrainerRoad. I had about 2 months off the bike, and prior to that had been in a base period of training for quite a while (couple of restarted training plans due to life), so Xert doesn’t have great info to pull a signature from.
So, after a few weeks of tinkering around and getting used to the system, I’ve been having a go at Fitness Test V2. As my signature is pretty far away from where it should be, I’m having to tinker manually to ballpark it until XATA can take over. But that’s led me to actually look at the Fitness Test workout structure, and there’s something I just don’t understand that I’m hoping you fine people can help with:

The workout contains 4x pulldown efforts and as I understand it, it’ll extend or shorten the interval until you hit the %MPA specified.
The pulldowns are all set up similarly but looking at the last one as an example, the target power is 120% TP and the target duration is until 120% TP MPA is reached… now I don’t understand that. Surely that means that you can never actually breakthrough on these intervals, because as soon as you hit 120% TP MPA, the system kicks you into the recovery interval and flags it as a fakethrough? When looking for a breakthrough, shouldn’t the duration MPA always be lower than the target power, so that your MPA crosses the target power at somepoint (if you’ve improved enough to breakthrough)?
I think you can only truly breakthrough with this workout on PP.

No problem with the pushup breakthroughs at the end of the workout, because the goal is to push as hard as possible rather than as long as possible (and the mixed mode flips you over to ramp mode so you can push harder than target).
Any ideas what’s going on with the pulldowns though? Are they not intended to be breakthrough efforts? Are they instead intended to create fakethroughs, pulling down your signature just a bit so you can punch through it in the latter 4 efforts? Am I not supposed to run this workout in auto mode but instead just push a bit harder than 120% of current TP?

Think you’ve hinted at it in the end of your post - best to do BT efforts in slope mode so you can actually breakthrough ‘fully’. If it’s been a long time since a BT that’s especially important (slightly annoying if auto mode finishes an interval when you have something left in the tank). It may be worth increasing the intensity a few percent (or more) as well, given its been a while.

In the end, what’s important is that you go to failure after drawing down MPA. When you think you’ve got nothing left, try and sprint. Then recover for 10s or so then go all out again (and again if you can)

Yeah, I think I came to that conclusion while I was typing the post! V3 looks like it’s more suitable if I want to run in auto mode, but I think you’re right - slope mode is going to be better for any inside breakthroughs. Thanks!

Even v3 is best in slope mode for signature accuracy, despite what the description says… you can then go all out and also have a ‘natural’ failure profile rather than the sudden stop

As @wescaine mentions Slope mode is the best way to go and then exceed the effort interval targets when you can and think you can keep doing that.

I usually start BT workouts in AUTO mode for warmup then switch to Slope before the red zones and get settled into a gear and/or slope % conducive to the upcoming challenges.
The key juncture is the sprint following the MPA drawdown intervals where you’ll need to jump up right before you collapse, spin up, and hang on for at least 5-7 secs or longer.
You can also use the rainbow gauge to gamify the BT event. Watch what happens to the gauge and you’ll see what I mean. 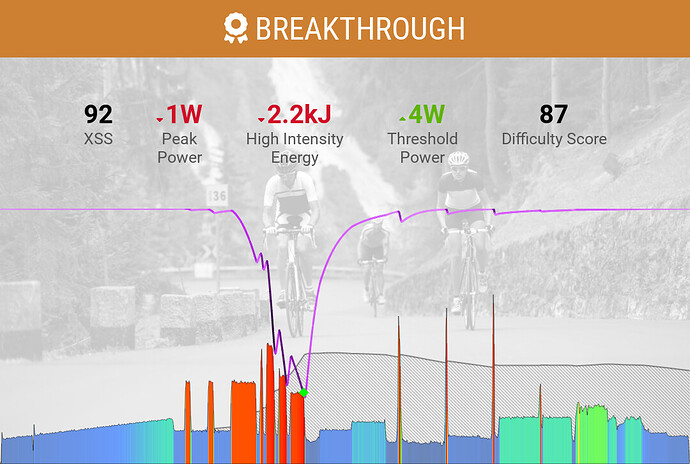 I’m still unsure how to do the last sprint efforts? Even in slope mode there’s no way I can get to maximum power in 7 seconds and then the trainer releases the 5% slope and I’m back to 50w.

Ride the entire workout in Slope mode next time so the trainer never controls resistance.
That way you can exceed both target watts and duration in order to push through to a BT and reach a failure point.

What % do you set slope to? Never seem to get that one right

Use whatever % feels comfortable to hit targets using only gears and cadence.
This will vary by trainer model. You may need a different percent for sprint intervals but in most cases spinning up to high cadence will work as it will when attempting a max effort under fatigue.