Help me understand this MPA vs W'bal (Golden Cheetah)

I’ve been lurking and trying out Xert for about 3 weeks now (5 weeks training in the legs), after a long 6-year break from any meaningful training. I’m currently using TR because that’s what I’ve used in the past before the break.

Anyways being a data geek, I stumbled upon Xert and found it to be quite an interesting concept and naturally ending up comparing it to other options (GC, Intervals.icu…) ultimately before dropping TR once my sub is done.

Now to the point, I understand the concept of Breakthroughs had my first recently and I thought I understood MPA until this morning.

I did a 3x3 Vo2Max ride at 125% FTP (TR - Old Rag) with 4 mins off between reps and 10 min recovery between sets. I knew going in it would be tough as I haven’t really done extended work at that cumulative duration and power.

After the first set I was pretty gassed, it felt like the end couldn’t come fast enough and maybe if my life depended on it, I could eke out a bit more. I would rate my RPE somewhere about high 8-9 maybe even a 10.

On the 2nd set, my first rep felt really tough and i knew I would have to dig really deep to complete the workout. What keep me motivated was that I had done a similar workout (3x2, 3 sets) and I made it out alive. However, on the 2nd rep the lights went out about 2 mins in. I continued at recovery pace and tried the final set, same thing. Now it could have been I’m just not used to the suffering but physically I felt I was really approaching my limit.

Disappointed but excited at the same time I wanted to see what Xert told me about that workout and to my surprise my MPA was much higher that I thought it would have been. I checked Golden Cheetah and my W’Bal was what I expected/felt (gassed out after the first set, barely alive but still ticking after the 1st rep-2nd set. The 2nd and 3rd I attribute to yes being gassed but maybe still mentally weak.

Here are the charts. Any advice would be most appreciated.

Thanks for dropping by.

What you’re learning about is that there are several elements to fatigue that contribute to your ability to perform, which in turn are what you should be looking at from an improvement standpoint.

Firstly a caveat, with just 5 weeks of training and just one breakthrough, Xert won’t be able to get a very good picture of you as an athlete. It’ll need to make some assumptions. These can be overridden and we can help with that if needed. Always best to have some history of breakthroughs, some at high intensity and some deeper near threshold in your history.

One thing we believe is that training improves your fitness (think signature) and also your ability to express it (think higher training load and higher difficulty scores). So without a lot of training in your legs, doing multiple hard high intensity intervals like what you attempted will be challenging. I would imagine that if you define the workout you tried to do in Xert, the Suitability would likely be Challenging or even Very Challenging. WIth more training though, you’ll be able to get through it.

Wrt, W’bal, the math behind how it works doesn’t work well in many circumstances. Mathematically, W’bal will always go below zero during regular rides. This is because it can reach zero with power stiill available. MPA graphs capture this all the time as in your example. You likely had something left in that first set but W’bal reached 0. Had you gone a few seconds more at the end of those intervals, W’bal would go below 0 and this is totally expected. Remember that CP/W’ are calculated using MMP (“mean maximal power”) efforts which means you go until you cannot sustain the target power. In regular riding, you often don’t stop when this happens and just continue at a power below the target but above CP and thus W’bal goes below 0. MPA doesn’t have this limitation.

In addition to what Armando has mentioned…

First of all: 125% FTP can mean very different things for different athletes, even if they have the same (F)TP. For example, this workout is likely to be much harder for more endurance/slow-twitch athletes. I’ve quickly created a 3x3 @ 125% TP workout that illustrates this:

Now it could have been I’m just not used to the suffering but physically I felt I was really approaching my limit.

The 2nd and 3rd I attribute to yes being gassed but maybe still mentally weak.

This workout looks to be at least 3.0 diamond difficulty for you… how many stars do you have in your profile? Xert will generally recommend workouts that have a similar difficulty (in diamonds) to your training load (in stars), so that recreational athletes are not being recommended insanely difficult workouts!

Thanks @xertedbrain and @ManofSteele for you informative and supportive responses.

To Armando’s point, I understand and totally agree that my dataset is a bit limited thus far for what Xert is trying to accomplish. With that said when I got my breakthrough MPA and W’bal (GC) were closely matched with W’bal being -4.7 which is in sync with Armando’s point.

My concern is how far apart GC and Xert are on this workout coupled with my RPE. It seems like GC which is box stock except for required parameters is much more in line with my "RPE, Performance, Ability than Xert currently is.

@ManofSteele I recreated the workout in Xert but even from my MPA dips it seems to suggest that theoretically I should be able to handle this although with a high difficulty score. (I guess pain tolerance is a factor here).

For reference I would not consider myself anywhere near a fast twitch type “athlete” as 178cm and last weight in was 70kg on a bad day I’m definitely more of an endurance type.

I’m currently following a polarized training scheduled and only do two intervals in a 7day window. My last interval was also a 3 star and that went pretty well. Actually, when i compared my W>FTP that ranked higher than this one (Old Rag).

I’m not really searching for definitive reason as to why the two are out of sequence and certainly not trying to say GC is better than Xert or even similar in their functionality.

What I’m searching for is whether my layman understanding of MPA is correct, and that is MPA is a theoretical performance metric that says how much I have left in the tank at any given point along my power curve taking into account work completed. 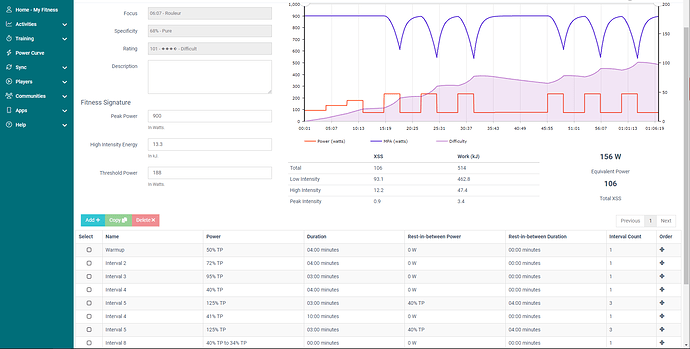 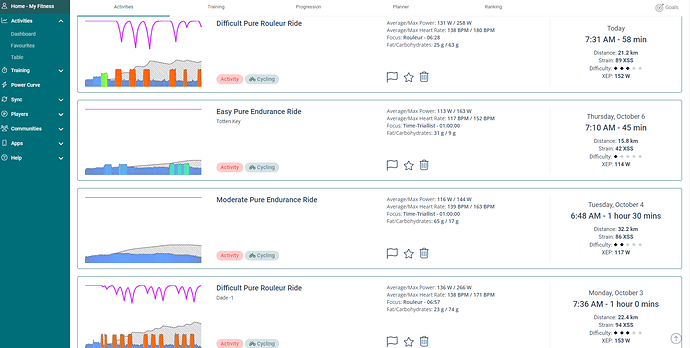 I understand the concept of Breakthroughs had my first recently and I thought I understood MPA until this morning.

Did you use the Power Curve calculator to establish your starting signature?
Xert needs more data to properly assess your fitness including more BT events in your historical data.

I wouldn’t spend too much effort trying to align one platform with another. They aren’t going to match in all respects plus Xert is taking a different approach with their 3-level strain model and MPA derived fitness signature.
The same goes with testing protocols. A traditional 20-minute FTP test won’t necessarily align with Xert’s maximal effort under fatigue algorithm.

Your example workout while difficult didn’t quite tip the scales into BT territory plus the rest-in-between allowed full MPA recovery. Compare that to a Ronnestad-style BT workout where you don’t fully recover during the interval set.
You may excel at one type of BT over another. The types are explained here –
Breaking Through the Xert Way! – Xert (baronbiosys.com)

I suggest validating your signature by riding a BT workout in slope mode as one of your HIIT workouts for the week. You want to be fresh the day of your BT workout to ensure the best results.
Search the Workout Library for “breakthrough” and you’ll find workouts designed for this purpose. Try them all over time to determine a favorite or two. Use Xert’s EBC app on your phone.
Ride them in slope mode, exceeding targets if able (without blowing up), and attack the hardest interval just before failure occurs (spin up and max out for at least 5-7 secs). That will produce the best results.

If monitoring Xert’s EBC rainbow gauge during the effort, you’ll “go purple” when MPA fully declines. If you also watch the Session Player in a browser window during the workout, you’ll notice a bubble/blister forming on the gauge.

Thanks for all the positive responses and suggestions. My final question and maybe its been asked in the forums but how would I go about manually entering/validating my power curve/fitness signature?

Do I complete three separate test @ 30 secs, 6m and 20 min or just find a best match all out effort and enter the values in the power curve calculator?

What I’m searching for is whether my layman understanding of MPA is correct, and that is MPA is a theoretical performance metric that says how much I have left in the tank at any given point along my power curve taking into account work completed.

I’d say in a broad enough sense, that’s what it represents.

Would note that MPA is a power output so a ‘rate of energy usage’ rather than an amount energy or ‘size of tank’. MPA doesn’t decline linearly so the number itself doesn’t help you figure out much you have in the tank… it’s just the max power you could put out at that point

HIE in your signature is the closest thing to W’ in GC (when fresh), so is a size of tank. Not sure if you have them at the same or similar level (can see W’ is 20, but don’t know your HIE)? If not, that could explain what you’re seeing too. That’s aside from Armando’s explanation of some shortcomings of W’bal / CP, and the point re difficulty

how would I go about manually entering/validating my power curve/fitness signature?

I honestly wouldn’t bother. Better off doing some more breakthrough efforts (some short, some longer, always to failure) and letting algorithms work it out. Or as Armando offered, just write to support and they can advise on whether tweaks are needed and make the changes directly.

Normally you would upload or sync enough historical data (90-day limit with trial; unlimited when subscriber but two years is plenty). If that data includes enough BT events that is sufficient to establish a starting signature. Otherwise, you can generate your beginning signature by performing a BT workout from the library. The standard one is about 30 minutes long of which only 10 minutes is the actual effort required.
Since you have limited history without BTs, the BT workout procedure is what you should do next.
XATA also warns you whenever no BTs have been detected in over three weeks. If satisfied with where your signature is at you can continue training with current numbers, but you can always validate your signature through a BT effort indoors or outdoors. No traditional FTP testing is required.