Freshness for 6h A race

What level of freshness do you recommend for a 6h road race event?
I do not know if “very fresh” is too fresh for a single day event?

If I enter future planned workouts on how I think I will taper for the event then it gives a training load of 65 and form of 20. How does this sound?

But the day after the event it only says I will be “very fresh”.

Very fresh (the day after) seems unlikely - did you enter correct estimates for the event? Not sure if a TL of ~65 will bring you to level needed to perform in an A race, but a form of 20 may be just right for you. It’s highly individual, but a normal range is -5 to 20, I believe…

Hi,
I just entered an estimate of 1 XSS for the actual race, to that I can see how long it will take for me to be very fresh if I did not race that day.

I started a little late with training, brought my training load from 38 (7 weeks ago) up to 68.

It is a team road race event, where either try to finish with the fastest 6 man for a good time or try to
bring 12 man home together under a certain time. This year we going to try the 12 man objective.

So, I will not need to go much into the anaerobic zones e.g. v02max power but rather have times working at threshold and then recovering (hopefully) at ~75% of LTP.

For a 6 hour event, conservatively calculated, you should enter ~350 to ~400 XSS - see what that gives you the day after… If you expect not having to do extra work because of others failing to do their share, and depending on the course (is it flat or hilly, or does it have big climbs), I would still estimate an overall average power (XEP) close to LTP. Try incorporating that in your estimate.

I just want to be in the best possible condition for this race (on 23 Nov)
Perhaps a lower form e.g. 10 will work for me, I normally feel strong the day after a 2 hour ride.

If I enter a training load of 400XSS then I am fresh again the next day but my very fresh status moves on with 5 days into the future.

That actually may be correct: if you’re (very) fresh the day before, you will be fresh the day after. Unless you burn yourself and the effort throws you into a yellow or even red status. But to accumulate a lot more than 400 XSS during a 6 hour event, is imho not possible with your current status (TL)…

That is quite a big jump in 7 weeks. DId you find it tiring ramping up like that.

I was tiring at times but I did a couple of big rides with a couple of rest days afterwards and just kept on training consistently. Also riding outdoors helped on the mental side.
My form was at it’s lowest 3 weeks ago at -36 but now it is around -5 for the last week and feeling good.

Perhaps a lower form e.g. 10 will work for me, I normally feel strong the day after a 2 hour ride.

Remember that the higher your training load & form you have going into an event, the better you’ll be able to perform (in theory). Think of it this way, although Xert currently applies all XSS at one point in time, it should actually be applied second by second during each ride. i.e. your training load would be increasing (as well as recovery load - so form would be decreasing) as the ride progresses. The higher your freshness going into the event, the longer you can ride in the event before your form goes negative, which may impede performance.

Thanks for that little thought. Very interesting.

Yeah, the way I think about form is that is serves as a “buffer” to prevent pre-mature fatigue during an event. This doesn’t mean that you should have a form of +100 before going into an event, but may explain why you may not have an optimal performance if you roll into a 400XSS event with < 10 form.

I’ve been trying to do a bit of planning for a 200 km gravel race in April. Last time out was about 450 XSS and if I build my training load to 80 and have a form of 45 (+56%) or there about going into it (in the green) I should come out of it with a form of -54 (-67% which is into the red). However, the next day I’ll be back into the yellow which I think is a fairly good rule of thumb. Too many days in the red after a big effort and I think you can pay for it in the long run.

So you net form pre and post event is close to zero.
I never thought of this buffer idea mentioned by @ManofSteele
So then you are basically fresh for the first half of the event and starting stressing your system in the latter half.

Your drop seems a little big to me for 450XSS.
2 weeks ago I tapered a little since we had two “big” days of cycling planned over a weekend.
Both days we had a 5h moving time but the second day was much easier.

Previously I did not see that it dropped this low, but I saw it now because I manually added an 1XSS item after the ride to see the same day effect on the XPMC graph.

Just checking my maths and the actual numbers.

Peak Training Load prior to taper:

With the current numbers in the plan I’m probably a little too fatigued at that Peak Training Load which is 2 weeks before the event, but the numbers give an idea of how the plan could work.

I am scared of doing so little, getting stale legs etc…

It takes quite a bit of mental fortitude to scale back the training in the taper period to get yourself sufficiently fresh.

Worth it though so that you don’t come out the other side with too little form.

I hope this freshness will show itself tommorow 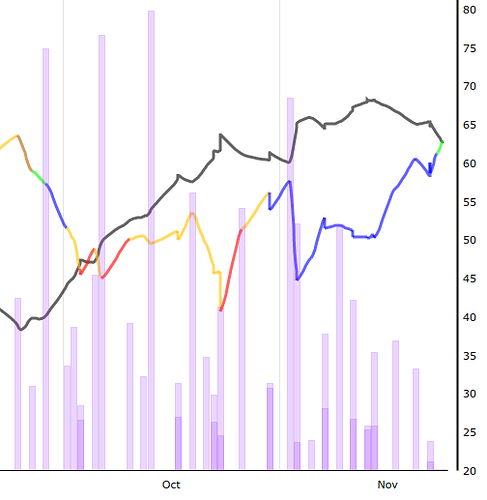 Was searching around, wondering about exactly what you ask about here…freshness recommendations. I’m in a similar boat but for a long MTB event (Attakwas), with my progression chart looking like it’ll converge to more or less the same point as yours. How did your DC go? You feel tip top during the race?