Hello, I had my breakthrough, I rode a bike race today and had a breakthrough and now xert is telling me that I have a TP of 388 watts ??? can xert really trust in this regard ??? before it was at 355 watts, that is an increase of 33 watts and now you have to pedal so much more all of a sudden, that is almost impossible … my power meter is calibrathttps://www.xertonline.com/activities/t0cvhrs5vwzjtsgs 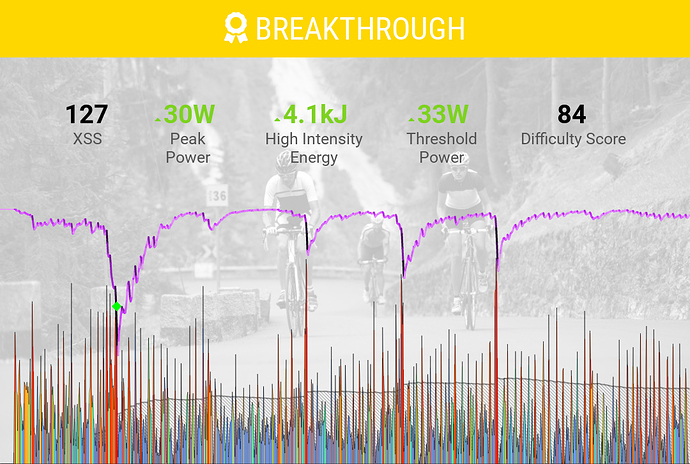 That’s quite a jump and yes, you will feel that during your (next) training

However, provided everything was calibrated properly and therefor the numbers are trustworthy, then this is what you are capable of.

Nevertheless, the adrenaline of a race is not reproducible during an indoor training and you may want to dial back the number(s) a bit before starting any session, but try to complete one as ‘prescribed’ every now and then.

And, if you race every week, this will be easier and show you that Xert is right

OK, the power data are okay and there were no outliers from PM that are so far consistent. But it’s pretty hard to have to pedal so much more straight away and I don’t know if I can do it that way, but I could slowly feel my way and try to do it, maybe what xert says will work and can be implemented, that would of course be great.

I’ve had a few BT rides that I have questioned whether that much increase in the numbers was legit. So I flagged the ride and carried on riding as usual. About a week later I’d go for (and get) another BT effort. At that point I would un-flag the previous ride and see if the second one still counted as a BT. If so, roll with it. If not, keep the first (questionable) ride flagged and go with the second BT.