During a race today I had what seems like a pretty clear breakthrough. However, its not being recognized in Xert for some reason. Below is the picture of the zoomed in MPA chart from the ride. Any ideas why this wouldn’t be considered a breakthrough,or even a fakethrough?

Only thought is perhaps you weren’t above MPA for long enough for the system to pick it up. Think I read it should be at least 3 seconds, and can’t see the scale.

Thanks @wescaine, that might be it. The time above MPA was maybe 3 seconds, but barely if so. But what’s confusing to me is that in the very next race I did yesterday Xert is giving me credit for a gold breakthrough and I’m including the close-up graph of that in this post, which has me just barely above MPA and not quite for 3 seconds either. In my opening post here, I left the Y-scale off but there I’m exceeding MPA by over 120 watts for that short blip. In the chart on this post (where Xert says I got a gold breakthrough), I’m exceeding MPA by 30 watts. I thought I understood breakthroughs, but I don’t think I do really. I went back to watch some of the learning vids, but no luck with understanding what’s going on here. 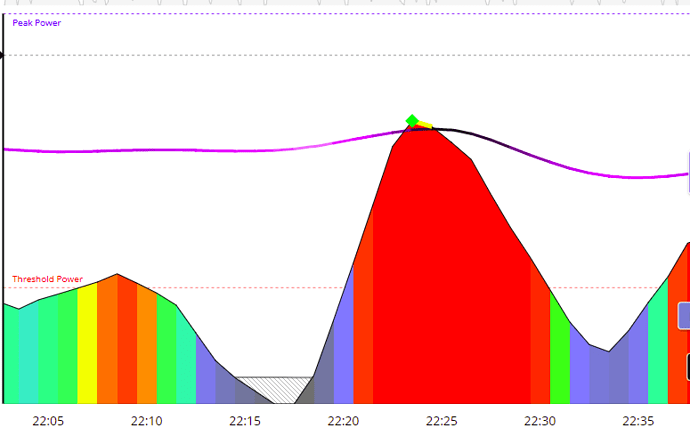 I’m not sure I understand. The opening post graph was the Basic MPA view from the first race of the day. The 2nd post was also the Basic MPA view from the 2nd race which is where the breakthrough happened. It would make sense to me if the order were reversed and I got a breakthrough in the first race that changed my signature and then the 2nd race, with new signature, would not yield a breakthrough. But that’s not how it happened. Or am I misunderstanding?

As @idefix says, go to Advanced MPA tab and click Previous button at bottom of chart.
That will display the activity chart with your prior signature applied before it was adjusted to the new values. This option is only available on activities with a BT or Near BT detected.

@ridgerider2, this is the problem: the activity in question isn’t showing up as having a BT or near BT so I have no way of adjusting fitness signature to see what happens. But what I’m struggling with is the intuition here. My first race in the day (chart in my opening post) has a breakthrough that’s 120 watts over the MPA, an effort that equaled 111% of MPA at the time. A substantial breakthrough in my book: certainly the most substantial I think I’ve ever had actually. But Xert doesn’t recognize the BT, or even a near BT in that activity. I just don’t get it. And then the very next race/activity later that day I have an effort that is just barely 103% of MPA, for the same approx 3 second duration, and I get a gold BT. I just cannot see why the effort in that first race, which seems like it should probably be one of my best BTs ever, doesn’t even get an honorable mention (near BT) by Xert. It seems like, if anything, that first race/activity should’ve triggered a BT and adjustment of my fitness signature which then would’ve resulted in no BT in the second activity later that day where the effort was not nearly such a blowout of the MPA. What is the logic behind that if its not a software glitch?

PP is equal to MPA when you are fresh with no fatigue. 120 watts over MPA while fatigued sounds unlikely.

PP reflects both your max power (measured by power meter) AND your calculated PP based upon your performance while fatigued (MPA drawn down).
Xert’s sig calc algorithm tosses out what it considers power blips. Perhaps that applies here.
Post the entire activity chart for the first activity and the entire “Previous” chart for the second activity and we may be able to provide more insight.
It sounds like the second activity was a legitimate pull-down BT while the first activity was a blip lacking sufficient data for the same.

Were these activities indoors or outdoors?

This was an outdoor race on a go-kart track, so the charts I’m posting here will reflect a lot of surges because one lap has 10 turns and its a tight course. The first chart, for the first race, the surge that breaks the MPA does look significant, but the scenario warrants clarification: It was on the turn before the last straight away on the last lap and I’d been sizing up this as my main passing opportunity on each lap up to this point and had been conserving energy accordingly. I was 5th wheel going into the turn and when I came out I hammered as hard as I possibly could and managed to get into 3rd wheel which is how I finished. It was an absolute all out effort. The 2nd race was a little different in that I made my move with about 2 laps to go. I had one guy who managed to stay on my wheel for about a lap and I was repeatedly attacking to shake him off (it worked), so the efforts there were of a different nature since I just had the one guy to beat. You may be correct in that this was a power blip, but I’ve considered that and don’t think it was given the context. The max power was still shy of my all time best (but very close) and this power meter (Assioma pedals) hasn’t ever blipped on me before. And yes, these are short races, but I swear its the longest 20 minutes of your life.

And thanks all for reading, considering amd responding to this. I appreciate the help.

And then the very next race/activity later that day I have an effort that is just barely 103% of MPA, for the same approx 3 second duration, and I get a gold BT

The point is that this ‘103% MPA for 3 sec’ is for new signature I.e. after the second breakthrough has been applied already. The trigger itself is relative to the old signature though. Hence, go into the second activity (the one with the breakthrough), advanced MPA, then previous and refresh. There you’ll (likely) see that you were above MPA for longer periods (which triggered the BT), since that is relative to your old signature (also the one from your first race)

As an experiment view the first activity, enter a lower TP on the Advanced MPA tab, click Refresh, and watch what happens to the analysis. At some point lowering TP should trigger the flatline MPA segment required for a BT event to be registered.
You may have been at the cusp for that to have occurred. For example, a TP 5 pts lower may have been enough to trigger a BT on that day. If not, I think it’s due to the spike protection logic built into the algorithm. The second activity met all the right criteria while the first did not.

What does your BT report look like from the second activity?

Note: Previous button performs a refresh at the same time.

Ok, I messed around with both of these features a little bit. Here’s what I can report back:

Second activity (BT recognized), if I go and hit ‘Previous’ it does adjust and the breakthrough then looks notably more significant and the BT effort is almost 115% of MPA using the reverted signature.

First activity (BT not recognized), if I override the TP values by reducing them, then nothing happens and a BT is still not recognized. But interestingly if I increase my TP value by 10 watts then suddenly it shows that effort as being a BT. This seems to point to that spike protection logic coming into play here because if my TP were a bit higher then my effort appears to be less of an outlier. Is that right? If so, then that spike protection logic must do a pretty good job of looking at what’s been going on in the activity prior to the spike event because the spike being disqualified here is actually less, as a % of MPA, than what actually triggered the BT in the 2nd activity but in that 2nd activity I’d whittled my MPA down further before hitting the BT effort.

Been marinating on this over the last hour. I think I need to consider an adjustment in how I’m using Xert but would appreciate feedback if I’m wrong.

A couple months ago I set my decay to Optimal Decay from Small Decay. I’ve been watching signature metrics slowly erode to the point where I know they’re definitely lower than what I can do, but I haven’t gone out in quite a while with the sole purpose of testing (and possibly triggering BTs). I’ve just had my head down, training. It seems like I either need to mix in testing more often or maybe reset my decay to Small. My guess is that either of these approaches would’ve had me coming into the activities of this past weekend (1st races of season for me) with a higher TP and I would’ve likely never encountered this spike protection logic. Hopefully I’m on to something here which might mean this rusty brain of mine is actually learning something.

If you’re not doing all-out BT efforts regularly you should actually use ‘no decay’. Described here. Also shows that you can retrospectively apply it by first changing the setting, then going back to your last good breakthrough and saving / locking the activity (within advanced MPA) to force a re-calc from that point on (explained in more detail in the article). Or you can just do a full BT effort next time you are fresh, and then activate ‘no decay’

I’m mostly on ‘no decay’ in winter, and sometimes use slow decay in summer… but I don’t race or often do crazy group rides so don’t have the ‘natural’ sources of BT, and don’t feel like riding all-out regularly for the sake of a signature update

Ok, thank you @wescaine, that’s exactly what I needed. I hadn’t seen that post before about why to modify decay to ‘no decay’, but makes sense. Basically I turned the decay to default at pretty much exactly when I shouldn’t have.

But, its fixable! Thanks again all for helping me get to the bottom of this and understand what’s going on.