Back in May I had some trouble with my power meter. The first time this happened, Xert flagged the ride automatically saying it detected bad data or something to that effect. However, my Peak Power went up by a factor of about 3. Subsequent rides with good data have gradually brought the Peak Power number down but it remains more than double what is likely correct.

A week or so later, a ride with bad data happened again. Shortly thereafter, I discovered and solved the problem (Stages left crank arm bent battery tab causing erratic power data). The power data has been good until just the other day. It’s not obvious if it’s the same problem or a new one and will likely take a few more rides to figure it out.

I’ve tried un-Flagging and re-Flagging the rides with bad data, but the Peak Power is still incorrect. It seems there must be a bug that is allowing the bad data to be included in calculating this metric.

“Fitness signatures being updated.” will appear. That will take a while dependent upon amount of historical data on file.
When finished if you want to further adjust your signature, there is a way to do that, but how many watts are you talking about?
Are you estimating your PP based on actual watts hit during an outdoor sprint? Or the theoretical value calculated during a 5 sec sprint effort while fatigued?

The first 2 rides with bad power data were automatically flagged during Analysis by Xert. I manually removed the flag for the first ride, let it re-calculate. The data was obviously bad and I believe Xert stated as much again. So I flagged it again and the Peak Power is still wrong. I tried this with both rides a few times and the behavior is consistent/repeatable. The bad data is being used to update my Peak Power whether it is Flagged or not. High Intensity Energy is also suspect but I don’t understand that one well enough to say for sure.

The only power meter I had was on an indoor trainer (data back into 2018) until sometime in February of this year when I installed a Stages crank arm power meter on my mountain bike. My Fitness Signature didn’t change more than typical small amounts from training and aging until the bad data in March. Peak Power has never been more than about 800 watts and suddenly went to over 3,000 with the bad data. There is no doubt the data is bad. It’s not just off a little or has a few bad peaks - it’s complete garbage. The power meter was continuously restarting due to a bad battery connection.

Suggest you file a request with support@xertonline.com as they can perform some backend editing to get you back on track.
While you can use the Advanced MPA tab to make manual adjustments, you’d be best off with a deeper dive by the experts.

Sent them a message. Thanks.

Just thought I’d share a response in this thread so that others can also appreciate what’s happening behind the scenes with invalid data.

The saying “Garbage in, Garbage out” is something that often applies to mathematical models and Xert is no different. If the data going into Xert is poor/invalid, then the resulting analysis from Xert will likely also be poor/invalid.

To demonstrate this, and with their permission, I’m sharing some power data from one of the mentioned activities: 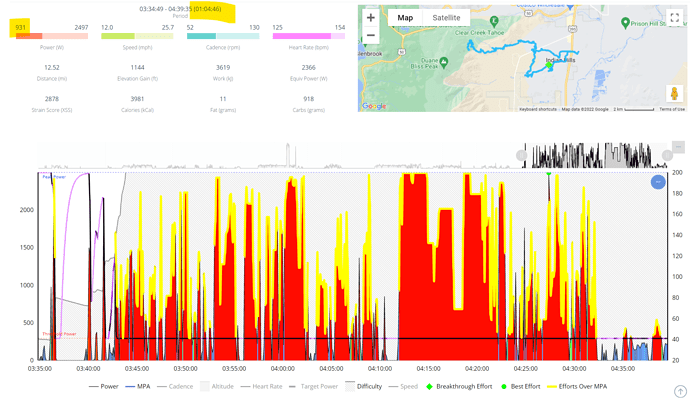 Some power meters do really funky things when batteries are low… for example, we can see from this screenshot that the average power for the last ~hour of this activity was about 930 W, far behind the physiological limits of even the most elite cyclists.

We have implemented some safeguards to try and prevent invalid data from skewing your signature.

image755×85 8.5 KB
In fact, you’ll see a notification (shown above) and Xert will automatically flag the activity to prevent the data from generating a Breakthrough and giving you a 900 W FTP

However, flagging an activity doesn’t stop the XSS from the activity from being added to your account. In the screenshot shared earlier, we can see that the last ~hour of the ride generated nearly 3000 XSS of strain, most of which is added to the Peak Power and HIE systems (because the recorded power values were so high). This will result in a massive upward shift in high & peak training loads, and consequently, a huge upward shift in your Peak Power and HIE.

In cases where the faulty data is only a short (<5s) power spike, flagging the activity should suffice (or you could use fitfiletools.com #PeakRemover tool to remove the power spike). For cases like the screenshot above, it’s best to either remove the activity completely and create a manual entry to replace the activity or use fitfiletools.com #FieldStripper to remove all power data from the file. You can re-upload the data file to Xert and allow Heart Rate Derived Metrics to estimate Focus & XSS from the ride.

Lastly, any time you’re worried/concerned about faulty data, feel free to reach out to our support team - someone will be happy to help review the data and advise on how to correct it.

Hope this helps/makes sense! Cheers all!