A few more questions about xert

and another thing, I’m annoyed by the difficulty level of activities… It is just frustrating to have to remember the inter-conversion rate between difficulty score and the diamonds for workouts… Yes there is a table online, but i mean if i’m out on the road, and XATA told me to do a 2-diamond workout, then i’d like to use my garmin and have my garmin tell me how close I am to going to a 2.5 diamond workout. but no, I need to memorize that my target difficulty range should be in the range 50-62 since garmin only gives a live difficulty rating.

finally,
anyone have an idea about the XATA interaction with the planner?
If i click through all the way to my target event, using the little button in the bottom right hand corner to “automatically create recomended workout” I notice in the weekly stats page of the planner that it basically never creates a weekly focus that is close to the “recomended focus”.
my target event date is april 25th… see screen shot below you can see in all the march weeks that it should be progressing me from endurance, all the way through to my target focus duration which is breakaway specialist. but for whatever reason, it never gets past the endurance focus duration. and going into april, it backs it just keeps doing an endurance focus duration.

the only thing I will say about the XATA is that it is prescribing a good work load that will steadily increase my training load while preventing my XPMC form from dropping into the red. 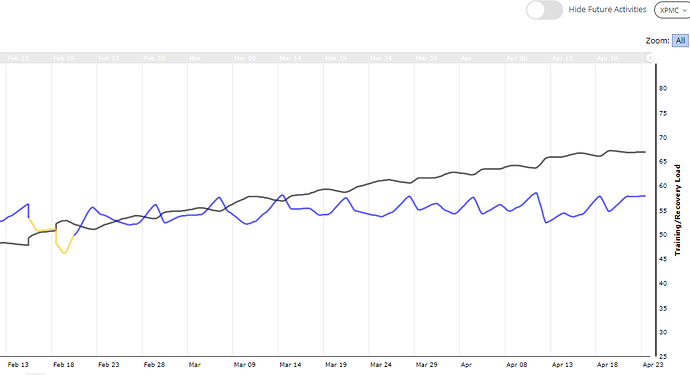 You can customize the view of the weekly stats page by pushing the column button in the upper right-hand corner (screenshot below). That view is shown by default, since it’s showing the recommended focus of the workouts through the different phases of your training program, as you get closer to your target event date.

Yes there is a table online, but i mean if i’m out on the road, and XATA told me to do a 2-diamond workout
If you’re doing a workout outdoors, the difficulty is somewhat irrelevant (or less relevant than the recommended Focus and XSS). We provide the focus difficulty to give XATA some idea of the difficulty of workouts to recommend (especially for indoor training). This is to ensure a newer, 1 or 2 star rider isn’t recommended 5 diamond workouts that they may not be able to complete. Since you’re free-styling your ride out on the road, you can dynamically make the ride easier if it’s getting too difficult.

If i click through all the way to my target event, using the little button in the bottom right hand corner to “automatically create recomended workout” I notice in the weekly stats page of the planner that it basically never creates a weekly focus that is close to the “recomended focus”.

We generally only recommend planning a few days (or maybe a week) in advance. The fitness planner wasn’t necessarily designed to test weeks/months of workouts at a time. Also, remember that weekly focus is looking at the total distribution of Low/High/Peak strain across the week. Since the total amount of strain is mostly low strain, it makes sense that the total focus would be more towards Endurance, but hard to say exactly without seeing all of the recommended/planned workouts.

I just spent the last half an hour trying to find the interconversion between diamonds and difficulty score. It would be nice if Garmin field could convey the difficulty in diamonds or the exercise recommendations was simply given a desired difficulty score range.

Earlier this week I tried doing a free ride to the desired Focus and XSS using the recommended Interval Target. This I achieved, but by the time the Focus had got low enough, instead of doing the recommended 1 diamond Difficulty I had done 2.5. This wiped me out for a few days.

What was the focus type, interval target, and workout goal (XSS) for that free ride?

Something similar to this.

For example, workouts in the one diamond range would have been limited to Smart - Can’t Stop 30 = 1 diamond/easy or Smart - Can’t Stop = 2 diamond/moderate.
You’d be said-and-done on a trainer in 30 minutes to an hour with around six to twelve 20 sec sprints with plenty of RIBs in blue.

The free ride to focus outdoor alternative should have been a similar effort monitoring watt target range (300 or higher), Focus field (draw down efforts), TTE/TTR (or RPE) for RIBs, plus an eye on the XSS goal for the day (when done, ride back easy).
How many intervals did it take to before you got near the 4:00 Focus point?
How long was the ride?
What was the XSS?
Were the RIBs easy and long enough? (indoors would have been 90 seconds to 3 minutes or longer at 50% LTP)

I have played around with the Workout Creator, and for those recommendations, it is very hard to get the desired Focus and XSS without significantly exceeding the desired difficulty rating.

I also noted that the only way to hit the desired Focus Duration whilst doing intervals at the recommended power is to start off with one interval that is well over the target power. The remaining intervals can then be as per the recommendation.

Something that occurred to me is that on a ride like that, the main goal is to generate a certain amount of High XSS, but the Adaptive Training Advisor doesn’t say how much, and there is no such Garmin Field that I’m aware of.

Sorry in advance, long winded post and not certain it’s fully fleshed out (I haven’t had my coffee yet today

it is very hard to get the desired Focus and XSS without significantly exceeding the desired difficulty rating.

Creating good workouts that aren’t excessively difficult is hard. I suspect this is why so many people have referred to coaching as an “art” over the years. However, with Xert you have a solid indicator of how difficult a workout will be without ever having to ride it yourself (via difficulty score). It just takes more than looking at TiZ or some weighted averaged power to know that

I also noted that the only way to hit the desired Focus Duration whilst doing intervals at the recommended power is to start off with one interval that is well over the target power. The remaining intervals can then be as per the recommendation.

Think of it this way… the focus is how we approximate the total accumulation of strain placed on all your systems. If you’re doing intervals at 300 W and recovering at 100 W, then the overall strain of that activity would likely be somewhere between the two. So you’re correct, if you include the strain from warmup, recovery, and cool down, then your intervals will probably be slightly above the recommended focus (if you’re just doing plain intervals like 5x4 @ 8min power to accomplish an 8:00 focus for example).

Something that occurred to me is that on a ride like that, the main goal is to generate a certain amount of High XSS

Not necessarily… I’ll expand on this below:

Without directly knowing it, you’re asking about Specificity. The more strain (XSS) you accumulate at the focus power, the higher the specificity. Xert doesn’t really recommend workouts by their amount of high/peak strain in particular, since you can’t train those aspects of your fitness alone - you’re always training a combination of low, high, & peak systems. Rather, Xert looks at the total XSS accumulated for a workout/activity and uses specificity to indicate how much of the that workout strain (XSS) is accumulated near the focus power.

As an example, if you were to do 5x20s all-out sprints (at your 30s mmp) separated by 10 min ez noodling (~100 W) between, what would be the overall impact of that activity on your fitness signature? Well, the focus would have to be somewhere near your 30s MMP (e.g. 00:30 focus), but also including the work done riding at 100 W (we’ll just call that 3:00:00+ focus), thus resulting in a low specificity (we use the term polar specificity). For workouts like this, you would see them rated as polar road sprinter:

Now if we were to completely remove the pedaling between sets, then the only work performed would be at/near your 30s MMP, so the focus would be 00:30 and the specificitiy would be very, very high (we use the term pure specificity). A workout like this would be rated as pure Power Sprinter - the focus would be slightly lower, because there is no additional low XSS (dragging the focus to a longer duration: