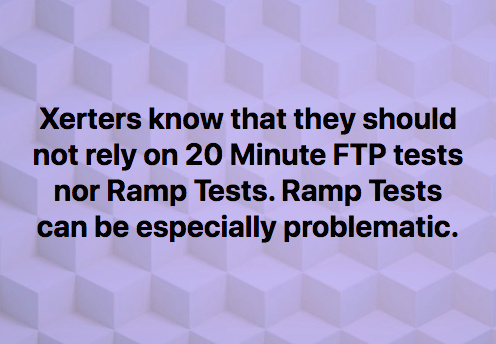 my signature still confuses the hell out of me… could be because of all the ramp tests in my history… IDK… either my TP is 266 or it is 293… I can’t decide… and it’s making me go crazy.

This is why Ramp tests aren’t always a good way to determine fitness. They don’t show any normal patterns in how you fatigue, and they assume the same relationship between TP, HIE, and PP for every athlete, which is incorrect.

You could flag all the ramp tests in your profile so they don’t affect your signature, see how that goes, you can always unflag them if you’re not happy.

if you’re not happy.

I just tried flagging all the ramp tests, Including the ones where I had locked the adjusted signature. Nothing happened. I can’t see any differences in my career signature progression at all… I’m not convinced that did anything? (was I supposed to unlock all the locked ramp tests as well?)

I don’t even know what fitness signature would make me “happy”? What kind of fitness I have and where I want to go from here?
I mean yeah the right fitness sig would be good…
but it all comes down to nailing the right LTP i guess for me.
How should LTP feel if I rode at exactly at LTP for an hour? is there a corresponding expected heart rate? I don’t have a lactate measurement device… I’m going to do that tonight for myself… though it will be a recovery ride after my morning TR Geiger +1 sst workout with TR FTP set to 283W.

One thing I am curious about, Is that I’m envious of the lighter top cyclist athletes in my area… they can do a 2 hour ride at ave power numbers that are a little below my Sweet-Spot range, and they are doing 125 HR… being that they are maybe half my weight, their TP might be similar to mine though I’m not sure on that one.
Those low heart rates definitely impress me (and I know that during the races they might get up to 200 BPM). So I really feel that there must be some correspondence between HR and LTP. or something like that.

In my current signature i’m at 290W TP and 236 LTP. so 81% of TP is not too bad on paper… it’s not 90% as was posted for what a slow-twitch rider would be at… but it’s also not 70% like an amateur sprinter either… Generally, I’m below average for a sprinter. riding around with friends, we have done practice group sprint races and i’ve never really made it above 3rd out of 5 or 6 guys. It could just be due to my 100kg body weight possibly, my 1300W peak power wouldn’t accelerate me enough to matter I think.

On tuesday morning, I did a workout: lucy in the sky with diamonds 90 on with the TP set to 266W (don’t know what LTP was, probably 70% like an amateur sprinter), i did average power of 169W for the ride… my average HR was 130bpm indoors and I put down an RPE of 3/10. was this lower than my real LTP, Or probably a good set-point?

where my weight doesn’t matter is where i have the most competitive results, flat 16-20 minute time trials have been my chance to shine where i’ve gotten a few first places in the category 4/5 group (but I know i’m not the fastest cat 4 time trialist in the area). Never tried a 40K TT though I’d love to… road races that I want to do always seem to interfere.

In august 2019, i did a 1 hour time trial at 269W average… I was late to a group ride, i knew they were pushing an easy pace, so I went 21 mph average for the hour to catch the group with a HR that climbed to a maximum of 178 on a cool 64 deg F day (out of ~188 BPM hot day race pace max)…I was very proud that I caught them! mentally, it wasn’t too bad… i had the carrot there in front of me and i kept positive. Don’t honestly know how much harder I could have gone. I was trying to keep a pace calculated by speed to catch them along while always staying safely out of the range where i know i’d blow up.

image.png1470×719 175 KB
generally, I’d agree with the Xert analysis of the above ride difficulty wise… Also, i agree with how far down the MPA got at the end of the time trial where i went harder because I knew I could make it to the group in time before blowing up. the signature at the point of this ride was 1560 PP//35 HIE//293TP

I wouldn’t worry too much about your history yet, instead focus on getting your signature dialed now. Try a workout like Ronnestad and go as hard as you can in the first set or two. Or a shortish Zwift race (the best option for me personally). Soon you’ll get a feel for what your signature really is and what it would take to get a breakthrough.

focus on getting your signature dialed now.

ok… yeah i think that is good advice… Sounds remarkably “polarized” too doesn’t it? since you should probably not try for a breakthrough too often… say… 1x per week in a 5 workout/week schedule?

Not really - a 30 min Zwift race every 2 weeks is all it takes for me. Also if you want to do a traditional base phase you can set your signature to “no decay” once it’s dialed in properly and you won’t need to keep going for regular breakthroughs.

TrainerRoad’s Geiger is a sweetspot workout, which could very well be above your LTP. If you want to develop your LTP, it would be worth doing longer intervals just below it to push it out and it should also push it up. If you have the Android app your LTP is visible when you open it.