Hey everyone! Just wanted to make an equivalent post from Facebook into our online forum, since many users that are active here aren’t on FB at all.

Let’s see some of those breakthroughs our Xerters have been up to lately! Was your BT expected? Were you pushing for it? Was it from a workout, Zwift race, or outdoors?

Not sure in which format you like the BT posted.
I went for a breakthrough today with one of the breakthrough workouts.
As you can see I extended the warmup a bit and also extended the 30/15s until I had the breakthrough safe and THEN went for the longer effort with the final sprint.
This always gives me a big bump in TP but a relativ short time of max effort (17sec) although I was in purple during the workout for quite a time.

You do realize that you trigger the “do you think this BT gave me a sound signature”-question from insecure people with this thread, do you?

With that being said: Do you think this BT gave me a sound signature? especially if you look at a BT that happened occasionally a week before when I was performing a heart rate step test and extended it to the top of Alp du Zwift.

Xert-Activity-London1549×375 36.3 KB
Started a group ride on zwift and my wahoo heart rate strap started playing up (again) asked my wife to fetch my old Garmin strap which needed pairing, had no idea if I could continue riding while pairing, turns out you can’t, I lost the bunch and that was that. Decided to do the PRL half and go for PRs on each of the 4 ascents of box hill, got a PR each time but didn’t get a breakthrough but did on the short sprint up the escalator so not a bad day after all.
2 Likes
Brazoo (Ghyslain Brazeau) January 16, 2021, 11:54pm #4

This BT occured 2 weeks ago, riding in Zwift, climbing Ventop. I decided to drain the MPA on the last couple of KMs. I find it easier to get BTs on climbs (vs flat terrain) 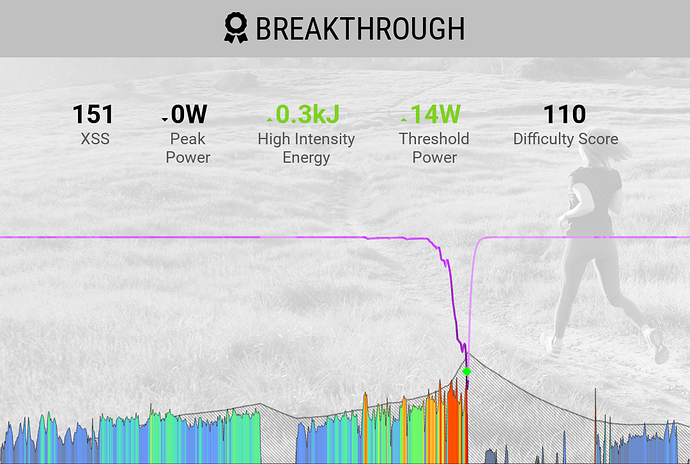 Not sure in which format you like the BT posted.

Easiest option is to click on the Breakthrough icon next to Cycling Summary when viewing the activity.
I bet you thought that was just a badge icon like I did.

Clicking that icon generates a breakthrough report pop-up that includes a download button.
Then you can quickly post your BT report like @Brazoo did.
Here’s mine from 8 Jan [Xert Fitness Test for Breakthroughs - Under Pressure (revised) – 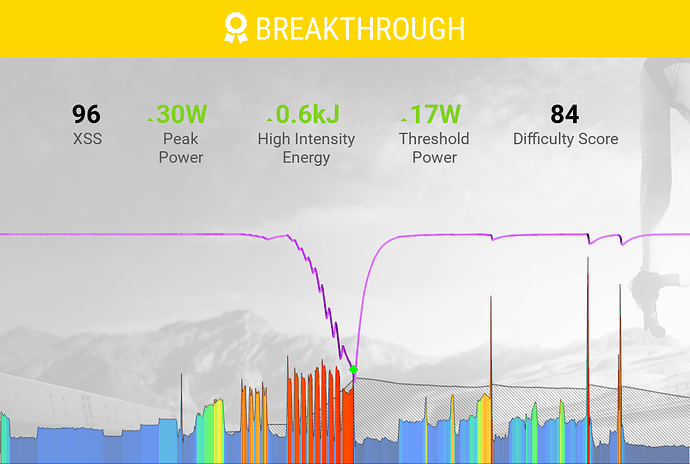 I am just exiting base after a couple months of sporadic exercise so bar was set low.
This BT reflects my first sizeable jump for the season and numbers feel good as confirmed by subsequent workouts.
I warmed up in Auto mode then switched to slope for the remainder.
I made a concerted push for the BT by watching the rainbow gauge as MPA drew down below watts. I didn’t have much left for the ending sprint which is why I tossed in some PP attempts of my own after the BT event.

Easiest option is to click on the Breakthrough icon

This obviously is indeed the easiest way

On your BT you followed the same protocol I did. Do you also feel that TP might be a little overestimated and HIE a little underestimated?
But then again, it might not be protocol dependent but rider dependent (as I’m a little prone to fast twitch fibres)

Do you also feel that TP might be a little overestimated and HIE a little underestimated?

Updated my post to include the info @ManofSteele was asking for.

I wasn’t pushing for a breakthrough per say. Just had the urge to push it on the Richmond climbs to finish that TdZ stage. Had the Sagan 2015 finish in my head, but nowhere near the power. I havent had a gold breakthrough in a while, looking for one of those next.

You do realize that you trigger the “do you think this BT gave me a sound signature”-question from insecure people with this thread, do you?

Don’t worry, I’m here to remove all the fear

I potentially should have explained more in the other thread that having multiple points of failure in a single ride is also super helpful for the system to extact a signature. For example, hitting failure just once on a ramp test might make it difficult for the system to extract a meaningful signature. But hitting failure on the ramp test and then on a few sprints can actually help considerably. The first BT you posted is one of the later… you touched MPA on the first set of 30/15’s and then got really close with the follow-up sprint (ouch…)

The second BT you posted is still good! Despite the MET of 35s, it took a considerable time for you to draw down MPA, which can help Xert dial in the Threshold Power much better than smashing and pulling down MPA in 30s. For example, go to advanced MPA on that activity and try moving TP down like 2W and then clicking REFRESH and look at the result (don’t save it). Compare that to an activity where MPA is dragged down a single time in 90s (not Ronnestad’s/Billats where you pull it down repeatedly). Moving TP up/down a few watts in that case won’t do as much, since HIE will have a larger influence over those efforts. Hopefully that makes sense!

Decided to do the PRL half and go for PRs on each of the 4 ascents of box hill, got a PR each time but didn’t get a breakthrough but did on the short sprint up the escalator so not a bad day after all.

I think many people feel similar… long climbs provide a nice, steady resistance that allows you to slowly & methodically pull down MPA

I am just exiting base after a couple months of sporadic exercise so bar was set low.
This BT reflects my first sizeable jump for the season and numbers feel good as confirmed by subsequent workouts.

@ridgerider2 that is the best feeling! When you can ‘expect’ a BT, nail the BT session, and then still feel good on subsequent workouts. Excellent! I’m sure you’re aware, but I’ll state it for perhaps some newer users… when going for a BT, don’t treat hitting the purple on the gauge as the finish line - that’s what Xert expects your limit to currently be. Instead, you want to get to the purple and THEN hang on for dear life as hard/long as you can!

Had the Sagan 2015 finish in my head, but nowhere near the power.

I remember that race! Was a fantastic finish & motivating to think about! Richmond is a great course for Puncheurs with the generally punchier hills around. And Gold BT’s are the most rewarding. Haven’t been gold in some time…usually I get bronze or silver (either PP or combo of HIE/TP, but not usually all 3).

Here is my own personal entry from 3 weeks ago! I was off the bike for about 10 days over the holidays, so my signature had decayed a bit, but 2 weeks of steady riding once I got back got me back into a groove and I was ready to smash it! I had expected an 8W jump and minimal change in HIE. 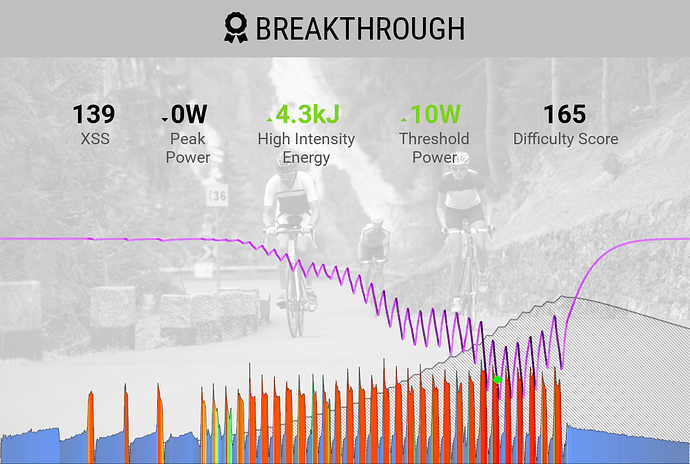 BOOM1080×727 349 KB
Ended up with a 10W jump in TP and huge 4.3 kJ jump in HIE. Interestingly, that combo of FS improvements kept my LTP at more or less the same intensity, which feels spot on (not easy, but not too hard).

I’ve had a couple good weeks of increasing riding (2 & 4.5 ramp rate), so going to schedule another BT session at the end of this week to hopefully confirm another jump in fitness. Just need to get freshened up. The hardest part of really ramping up your training is getting sufficiently recovered to really smash a BT session. 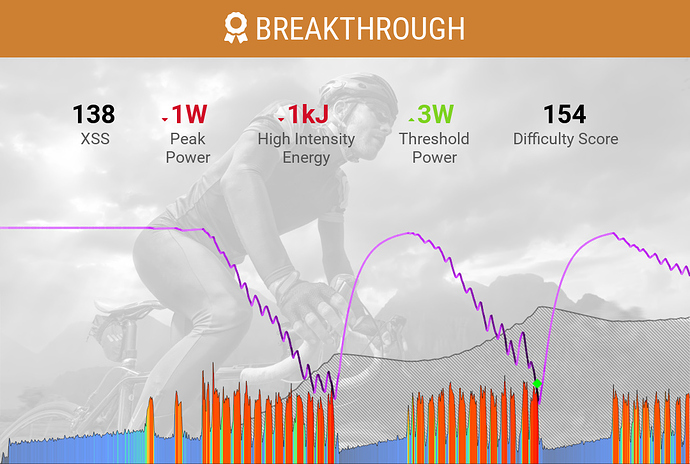 Here is mine, this saturday “A pain that i’m used to” workout.
During my third and last session a drop of sweat just hitted the left bottom corner of my garmin and i had to stop and restart. 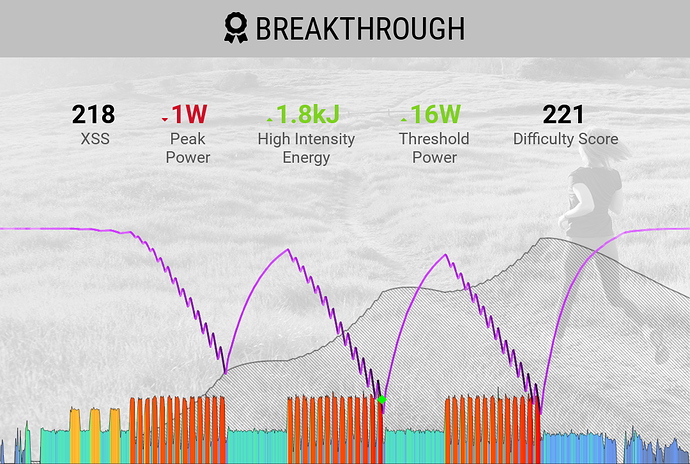 Here is mine, this saturday “A pain that i’m used to” workout.

“that shall not be named”.

Haha! For not being named, we sure do throw around it’s name quite a bit 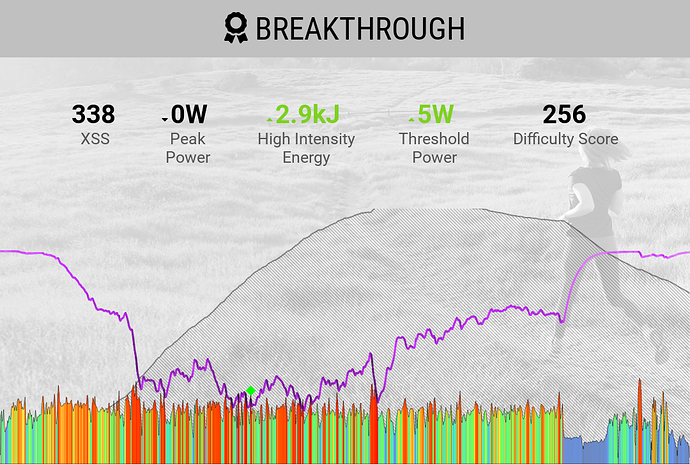 Just out of curiosity, how often do you (all of you) go for a BT? Once a week? Once a month? Several times a week?

For me, seems like every 2-3weeks, seems like it happens automatically (i.e.: I don’t plan it) when riding in Zwift (it’s winter here in Québec)

OUCH! That’s a heck of an effort. Long efforts at/near TP have a huge capacity to drive up the XSS & difficulty score. If you go to Advanced MPA on that activity and bump up TP by as little as 3 W (then press REFRESH) and look at the updated XSS, difficulty, etc. EDIT Being able to ride that long near threshold is very, very difficult. I suspect you likely have a few more Watts to squeak out of your threshold

@Brazoo I plan most of my BT sessions in the winter season, as I don’t free-ride on Zwift much (the Wed morning Surplus Seekers ride and the recent Sunday Scones ride are exceptions). How often I plan them depends on the changes in my training load. If I have a couple back to back big weeks, I know I can push for a BT to update the signature. If my training load is relatively stale, I wont push for a breakthrough for as much as 6 weeks.

Thanks for the tip Scott I was really happy with my effort hadn’t had a breakthrough in several months but I haven’t been chasing them either just been working one my endurance and weakness.

Couple weeks ago hit a gold breakthrough on this ride. Ended up flagging it though as I was having a hard time completing workouts with the signature it developed.

Got another breakthrough today on the club group ride. One of the guy’s broke away from the group at the top of this little hill one guy went after him I jump on his wheel then went around him and bridged the gap and then two of us push hard to stay away. Lots of fun I haven’t rode with them since September.