I read blog about Focus, read some topics here and listened to podcast ep21, but still cannot understand use of focus in Activity details. Iam not physiologist, but its hard to imagine, that it has same affect on body when riding e.g. 250W 40minuts as If I ride 120W for 90min and 400W for 3x2min. I think that affect on a body, cannot be the same, when focus was achieved with polar vs mixed or pure specifity.
I am not sure that adding a couple of sprints to an endurance ride really trains your 6 -minute power for example. What to take from focus, what does it tell me about my ride?
Its seems just like different terms for intensity and variability.
I am new to xert, so I will be gladly corrected, but now, time in zones tells me more than focus:eg 250W 2x20minuts - i know that I did sweet spot interval or 2x3 min at 400W - I did anaerobic interval, with 90 minuts of pure endurance at 120W 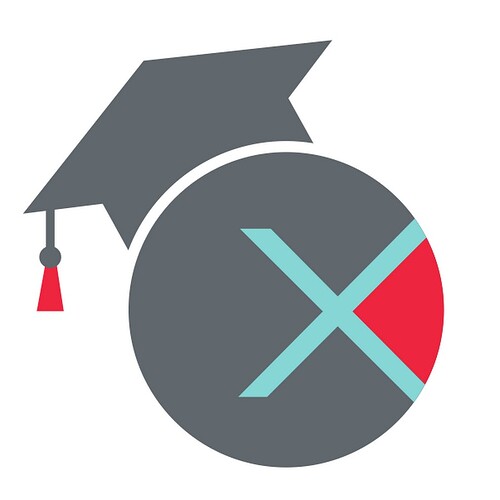 Learn all about Xert by watching our YouTube videos that cover many aspects of the software.

I think that affect on a body, cannot be the same, when focus was achieved with polar vs mixed or pure specifity.

Fully agree which is why you still need discipline to target the desired intensity when using focus; it’s not enough to just target the value (or bring it down with sprints if you’re trying to improve 6 minute power to your other point).

That’s not to say that time in zone is better, or all that matters, as I also see that the training effect of riding even at 90% of threshold is very different when fresh vs after a hard effort that brings down MPA. That’s what Xert captures via strain and work allocation ratios, which they then convert to a focus duration as a summary statistic. And they add specificity to that, so you can tell whether your training actually focused in the focus duration you intended

And Xert allows you to have some insight into non-structured rides eg group rides or races, where time in zone is actually pretty meaningless as efforts and duration are highly variable… eg the zone 2 you are doing after getting dropped is for sure not having the same effect as the zone 2 you do on your LSD training ride

thank you for replies. I read about work allocation ratio, but unless there is specifity Pure, its for me hard to imagine real training affect, that focus says. Scott said in one of podcasts, that focus can be achived in inifinte ways and wrote in some topic, that couple of sprint in endurance ride decrease focus, but doesnt have same affect as doing intervals at a focus duration power.
e.g. yesterday ride: specificty mixed, 06:56 with ratio 86:14 (from dashbord) and according to TP I spent 36% of time above my TP and 18% in anaerboic zone

I am not sure that adding a couple of sprints to an endurance ride really trains your 6 -minute power for example. What to take from focus, what does it tell me about my ride?

The idea of focus is to help us understand what the training effect of a ride was. If you ride for 2 hours and then add some sprints in, what is the overall training stimulus of the ride? It can’t be pure endurance - you put strain on your peak energy system. Alternatively, it can’t only be sprinting, as that would exclude the endurance work that preceded the sprints. Therefore, the overall stimulus must be somewhere between, right? Focus tell us this.

However, Focus is only half of the equation - this is where specificity comes into play. The ride you mentioned above may have had a 6 min focus, but the specificity was so low, that the ride could still be considered mostly an endurance ride.

It’s a bit of an abstract concept/chart, but hopefully you can follow along. If we plot focus & specificity on a polar chart, where focus is the angle & specificity is the radius, we end up with something similar to this chart I’ve graphed below (NOTE: this is not exact/to scale, but simply for illustrative purposes). 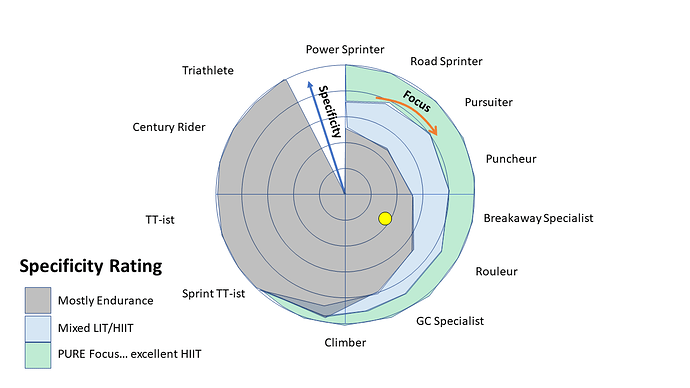 Anything in the blackish/grey area could generally be considered an endurance ride, since the vast majority of XSS of that activity will be LOW XSS. However, as you add more HIGH XSS throughout your ride, the specificity gradually increases (moving you closer towards the outer edge of the chart). This results in a ‘mixed’ specificity. Continuing to add even more High XSS will push the specificity even higher (towards the edge of the chart) into the PURE specificity rating, meaning that ride/activity was very SPECIFIC towards the focus duration you were training.

As an example, I’ve plotted where your example might fall on this chart (big yellow dot). Note that the angle/positioning of the dot still aligns with 6:00 Focus Duration, but the specificity would be so low that the ride could still be generally considered an ‘endurance’ activity (not a HIIT workout that develops 6:00 power). I created the chart mostly to help illustrate the example and further the discussion. Hope it makes a bit of sense!

Thank you Scott, I cannot say, that I understand that 100% now, but much easier to visualize it and got some idea with you chart